Baška - the most famous Krk beach 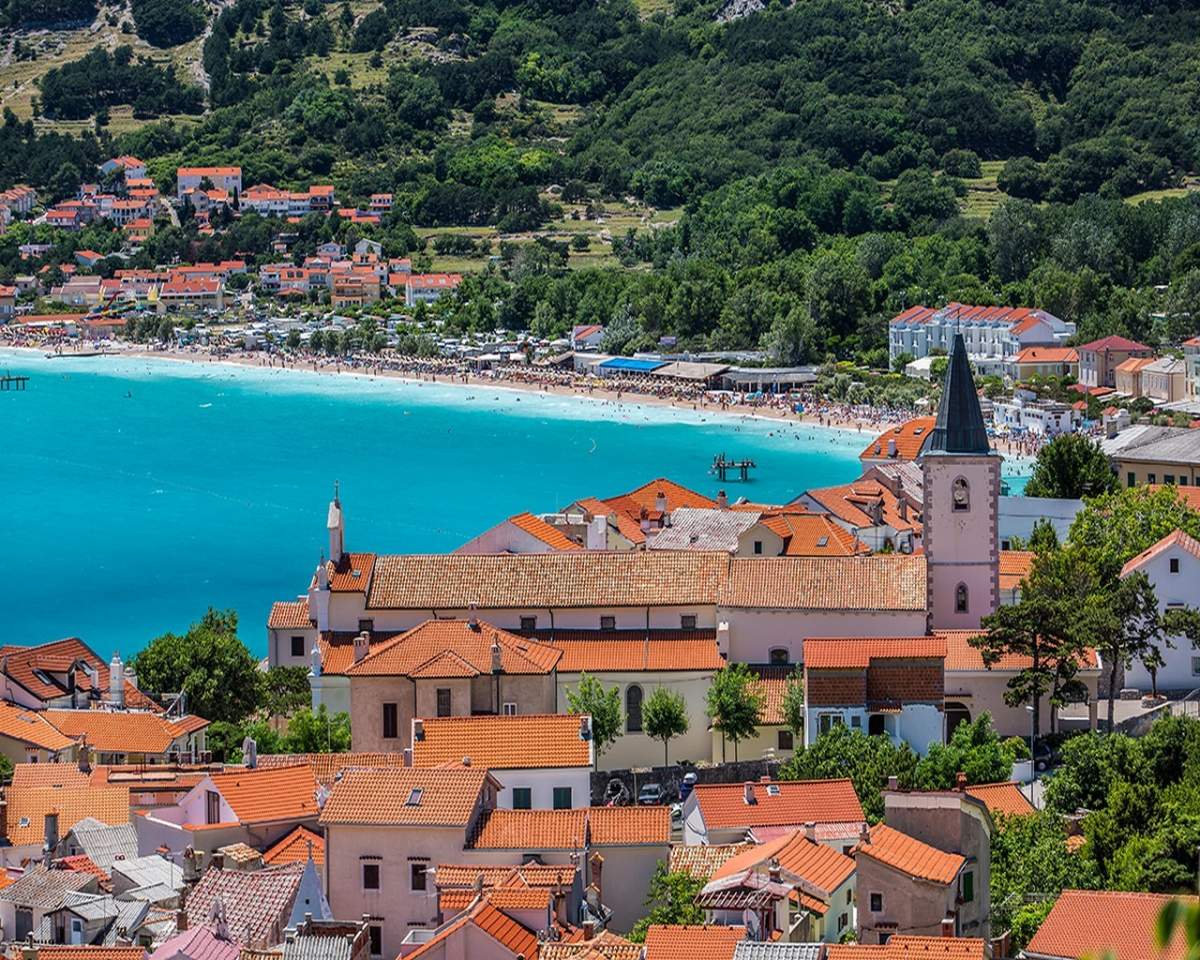 Baška is the southernmost settlement on the island of Krk. It spreads along a well-known, breathtaking 2 km long pebbly beach, Vela plaža.

The beach in Baška, unique scenery and accompanying diverse tourist offer is to be credited for the fact that Baška is one of the favorite resorts in Croatia.

Whether you are traveling with your family, friends or your significant other, Baška is an ideal place for you.

Baška shares the same turbulent history as the island of Krk, and a rich tradition in tourism is certainly a significant part of Baška's history.

Tourism began developing in Baška in 1904, when Czech tourists discovered Baška and were, like its present-day visitors, enchanted by the beautiful landscape, beaches and clear waters.

The first Czech guests came owing to the director of the Prague "People's Politics" (“Narodna politika”), Emil Geistlich. The inhabitants of Baška thanked him for it with the monument by the beach. 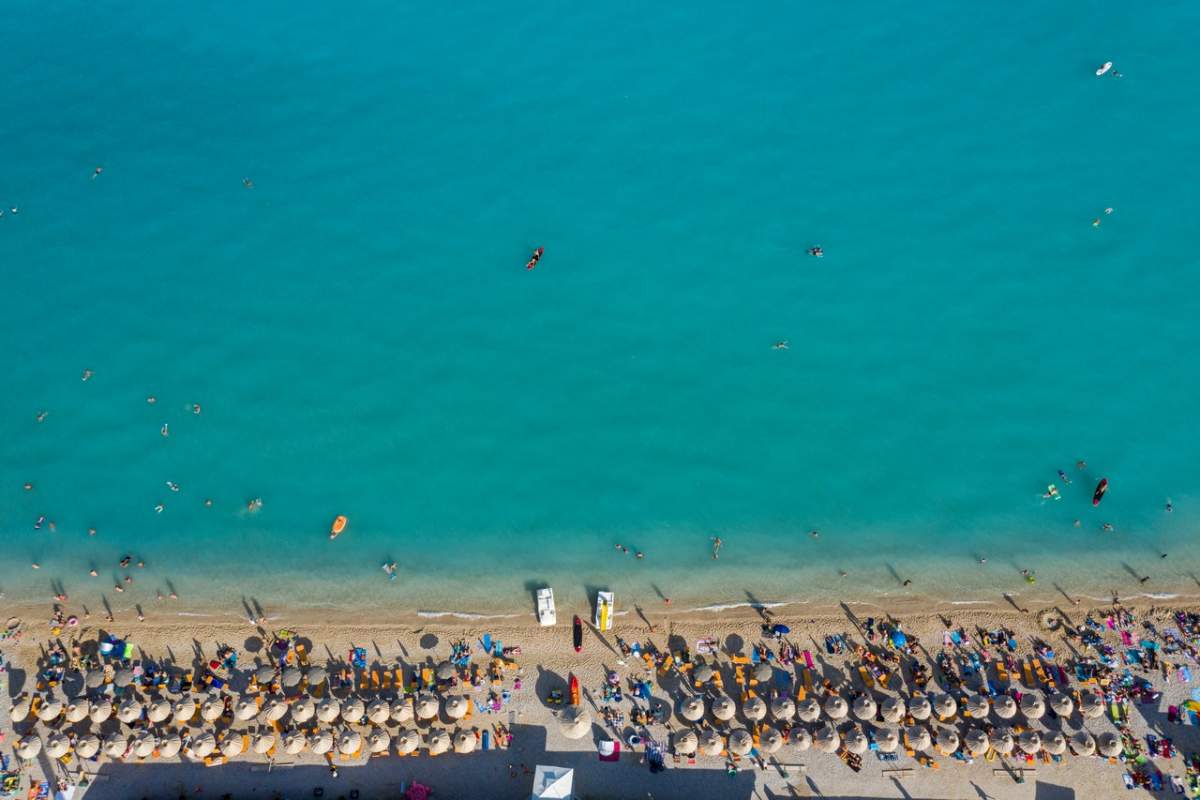 It was then, that the "Society for Embellishment of the Town" (“Društvo za poljepšanje grada”) was founded in Baška.

Two years later, the first hotel was opened, and in 1908, a bathing resort with bathing facility was added.

So, Baška is well known as one of the tourist destinations with the longest tradition both on the island and elsewhere.

Therefore, it is no surprise that during the tourist season, there are ten times more people in Baška than normally.

A variety of high-quality accommodation facilities, rich cultural and historical heritage, one of the most beautiful Croatian beaches, which is almost 2 km long, and many options for active vacation are assets of its tourist offer! 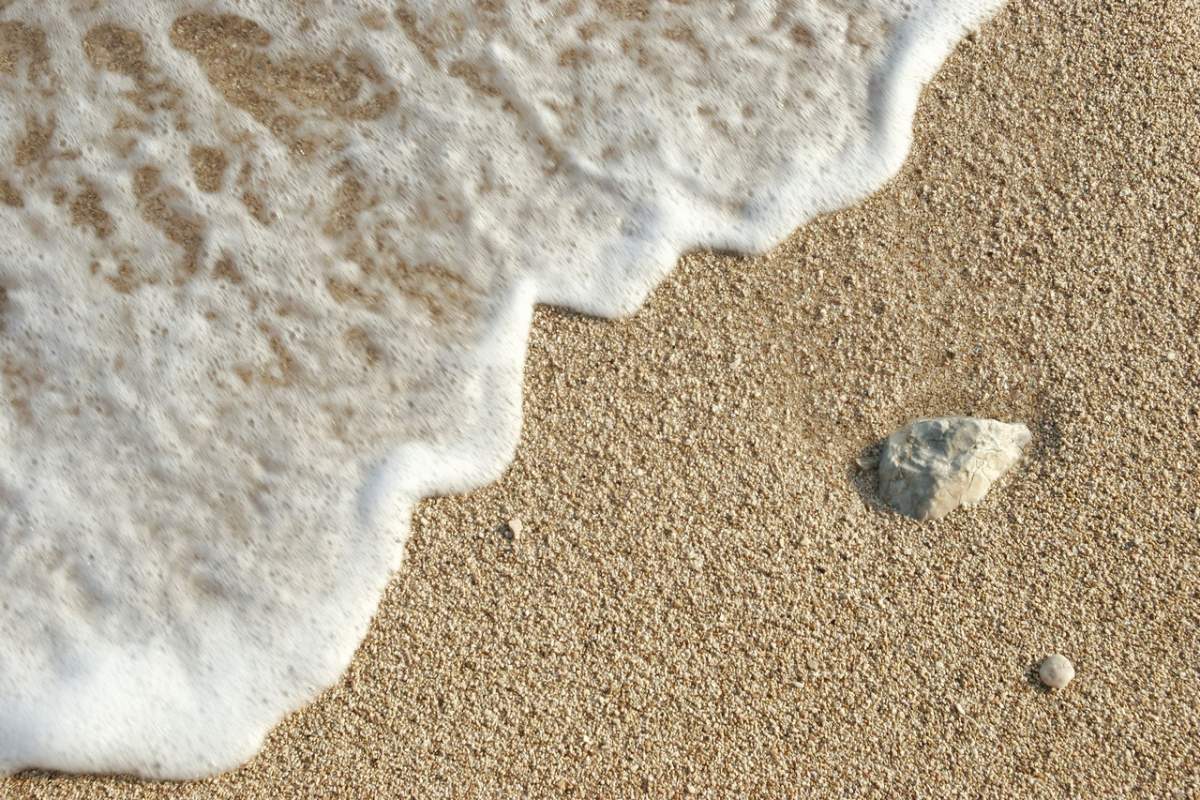 Baška is an ideal place for all those who love swimming, sunbathing and enjoying water sports.

It prides itself in thirty beautiful, clean, pebble beaches accessible on foot or by boat. In our opinion, the best of them are the following:

Vela plaža beach in Baška is certainly one of the most beautiful natural beaches in Croatia with a very clear sea.

The beach is completely natural, the sea is turquoise blue, and, to the delight of yachtsmen and sailors, big waves are quite common.

What makes this beach unique is its length of 1800 m. It has been awarded the Blue Flag, which marks an extremely preserved, safe and pleasant environment, the purity of the sea and beaches of top quality.

The beach has numerous different amenities so we are sure that everyone will enjoy it.

There is a wide range of beach bars, deck chair and parasol rentals, water slides with playpens, jet-ski rentals, parasailing and many more. 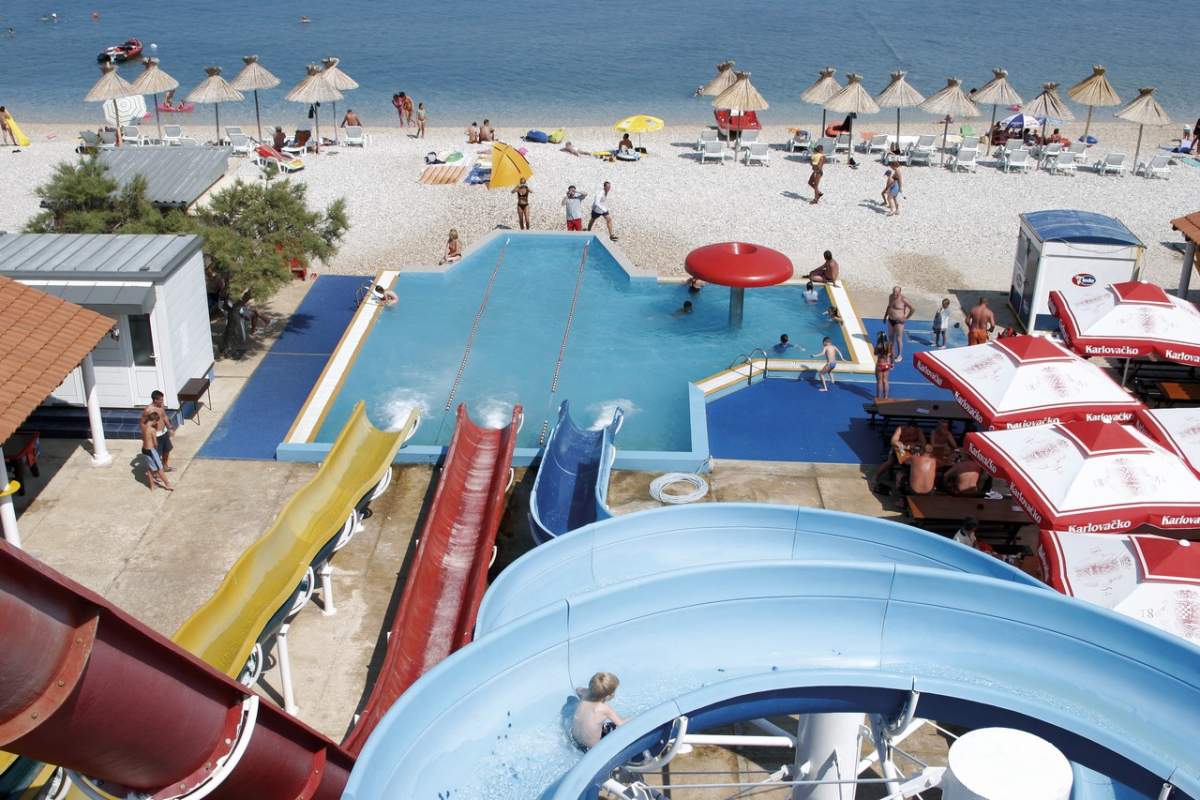 All those who visit Baška with their dogs will be able to enjoy a special part of the beach where dogs are allowed.

The amenities offered there include a shower, a parasol and deck chair rental, catering facilities, sports facilities and sports equipment rental.

Vela Luka beach is 6 km away from Baška, and it is impossible to reach the beach by car or some other means of transportation, but it takes a few hours of walk through the Krk karst.

Of course, this beach can also be reached from the sea side, by boat or by taxi boat.

This beautiful beach consists of fine pebbles and sand, and, although it is far from civilization, there is a restaurant, deck chair, parasol and pedal boat rental.

Only a kilometer from Vela Luka beach is the beautiful cove of Mala Luka. This beach can be reached on foot or by sea and near the beach, there is the top of Corinthia which offers a beautiful view of both coves.

Corinthia is an archaeological site located between Vela and Mala luka, on a 112 meters high hill, where once there was a Byzantine fortress and where the remains of an even older settlement were found.

Unlike Vela Luka, Mala Luka has no infrastructure or amenities, so we advise you to take water, food and other necessities when visiting this beach. 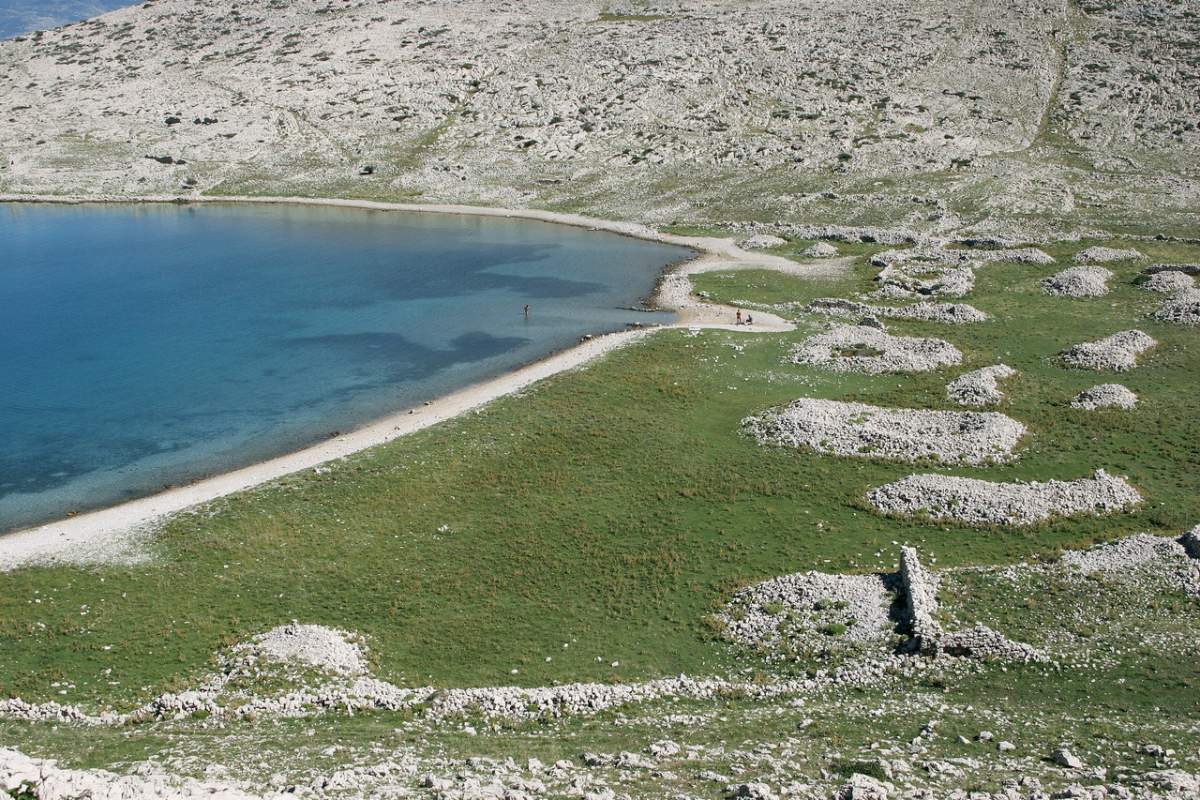 In addition to beautiful beaches, Baška will delight you with its magnificent nature, which you will get to know best by walking along marked hiking trails.

Baška countryside is dominated by the number of rare and endangered plant species (endemics and relics), and the island of Krk is known for its great biodiversity and take great pride in about 1300 plant species.

The landscape's beauty and the flora's richness will be best known on one of the numerous promenades around Baška.

We certainly recommend a walk from Baška to the Moon (the nearby hill), where famous Baška mrgari (sheep pens made of dry wall) can be visited.

Take another walk to Vela and Mala Luka, which are considered one of the most beautiful coves and beaches on the island of Krk.

Sports activities on the beach, marked hiking trails, climbing areas and the newly established Zip line will surely delight anyone looking for action and adrenaline!

Whether you visit Baška in spring, summer or autumn,there is always a wide range of events and happenings.

From all the towns  on the island of Krk, Baška is the one that offers the most sports events, not that the cultural, enogastronomic and entertaining ones are falling behind. 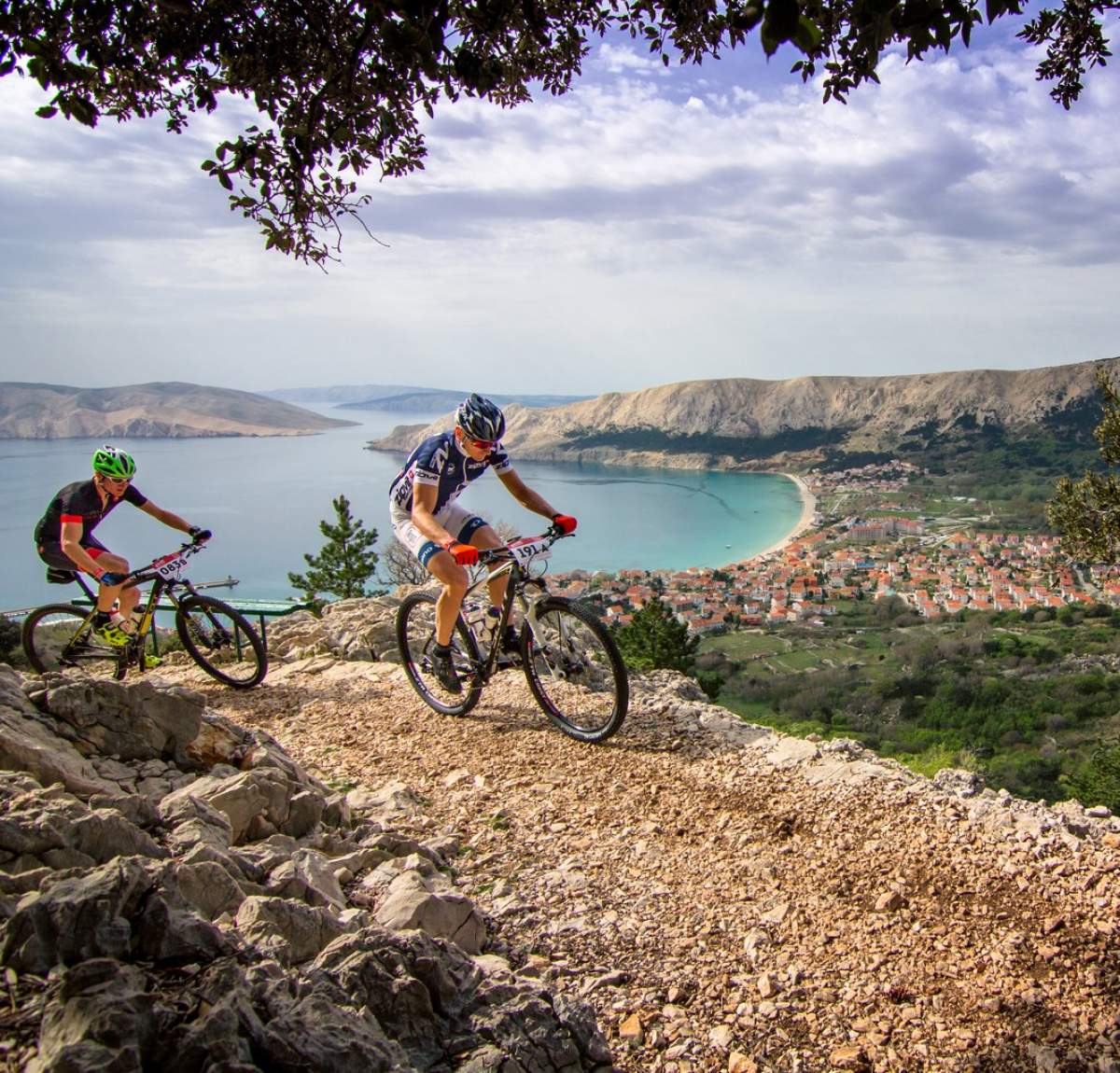 Spring and autumn are dedicated to enogastronomic and sports events, while cultural and entertaining programs prevail in the summer months.

One of the most famous enogastronomic events on the island and beyond, the Black Sheep (Crna ovca) takes place in Baška. 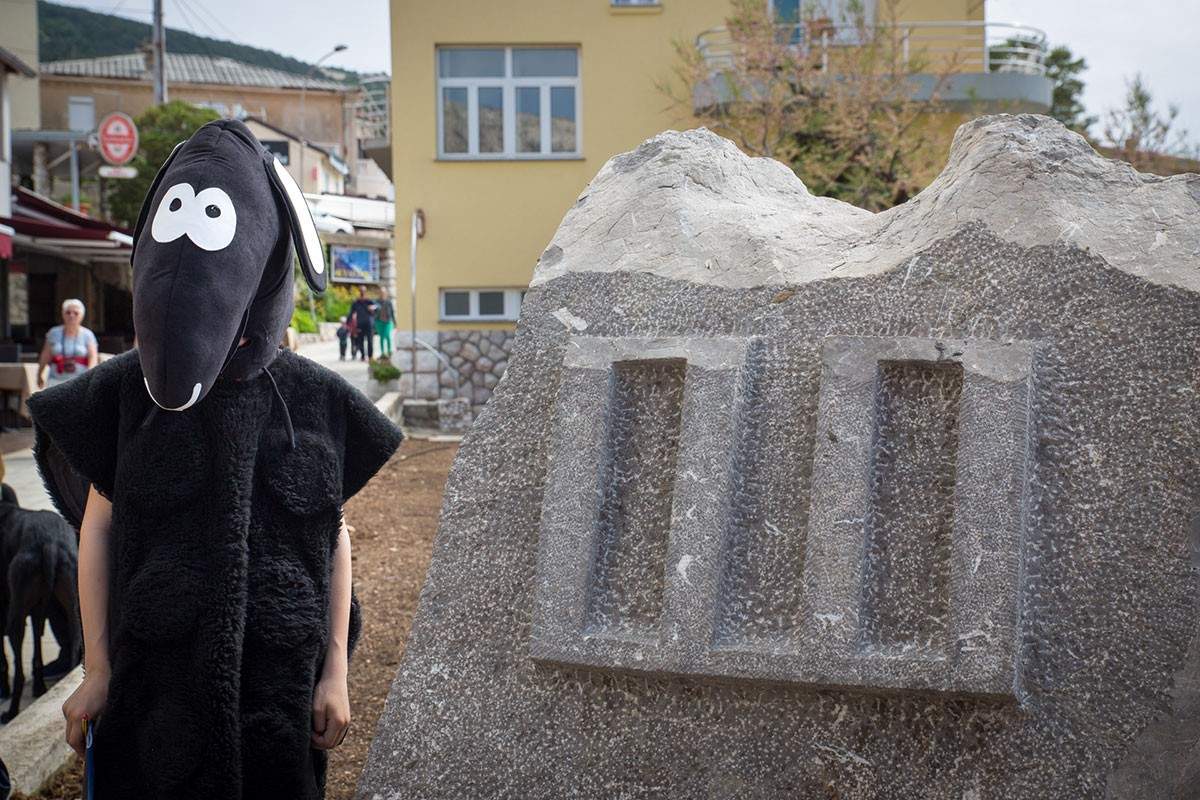 In addition to its rich cultural and sports program, Black Sheep is a festival which is especially known for itsexclusive gastronomic offer which includes a young Baška lamb meat.

This delicacy can be tasted in catering facilities and open-air stands, opened only for this event.

Black Sheep is traditionally organized in May when Baška offers such gastronomy delicacies and an interesting entertainment program. 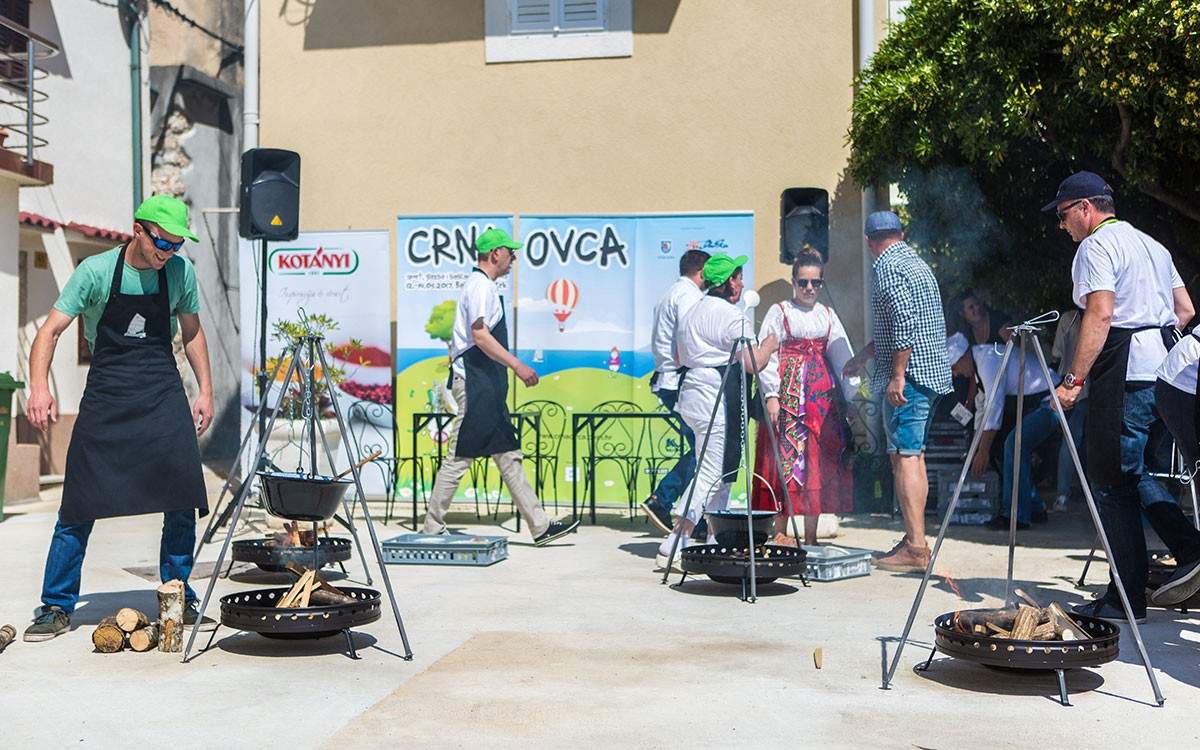 Other events include the festival "Rokova" which is organized in Draga Bašćanska every year on 16th of August, then numerous fishermen’s parties which take place in the summer months, as well as exhibitions, performances, folklore performances and many other events. 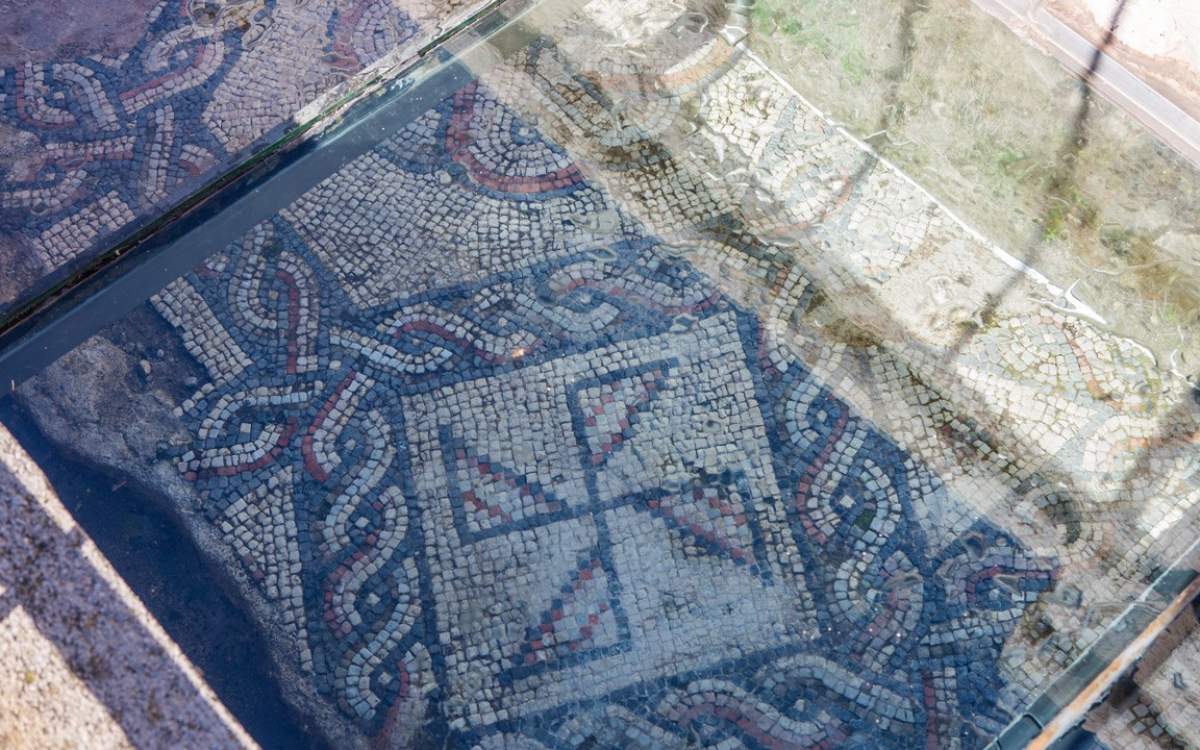 Archaeological finds reveal that this area was inhabited already at the time of Illyrians and the remains of a Roman settlement dating back to the 2nd century BC were found.

Until the 15th century, Baška expanded on a hill above today's site, and later began to develop along the sea, ie along the most famous Krk beach.

At one point, in the golden age of sailboats, Baška was the largest town on the island. 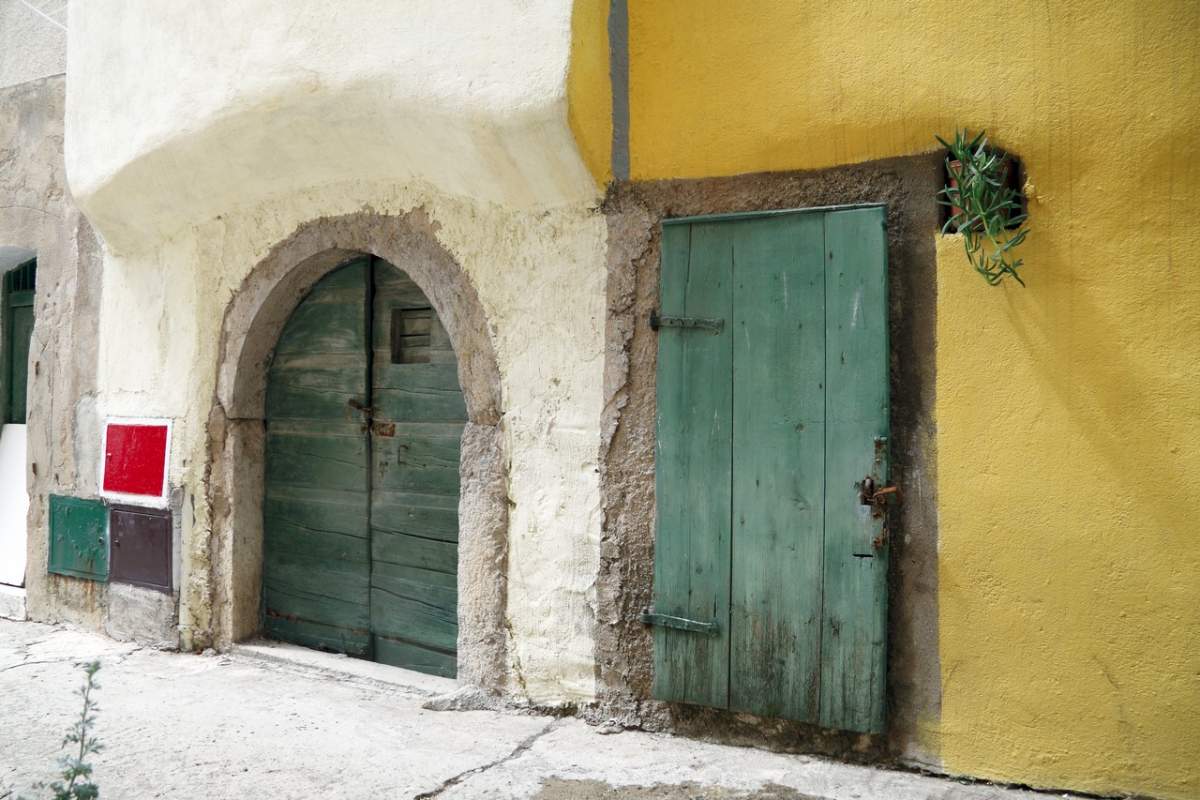 What to visit in Baška?

As for local landmarks, we would recommend visiting St Lucy's Chapel in Jurandvor, where the famous Baška Tablet is displayed, the parish Church of the Holy Trinity, the Church of St John the Baptist and the pilgrimage Church of Our Lady of Gorica on a nearby hill. 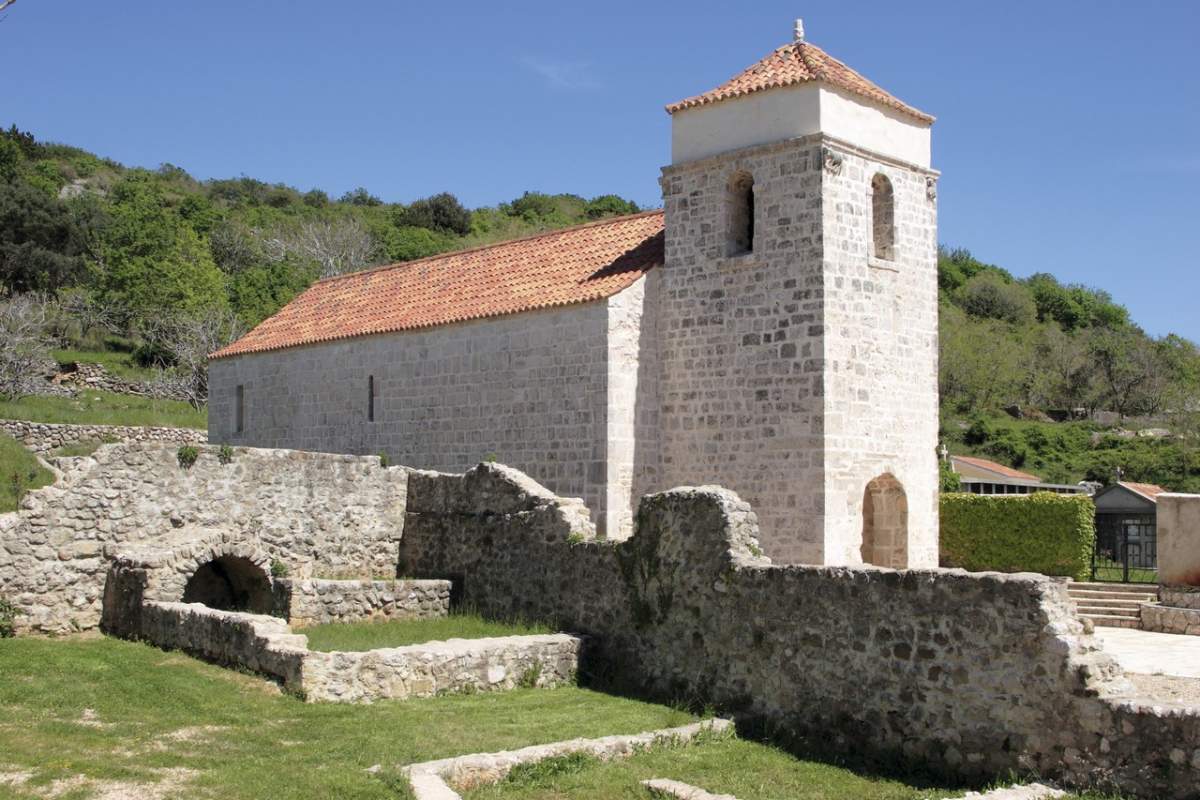 We want to recommend the extremely interesting Baška Glagolitic Path. The Heritage Museum of Baška and Aquarium in the town center is also worth visiting.

The Baška tablet and the Glagolitic path

In Jurandvor near Baška, as part of the former Benedictine abbey, the Baška tablet, an inscription in Glagolitic from the year 1100, was found. 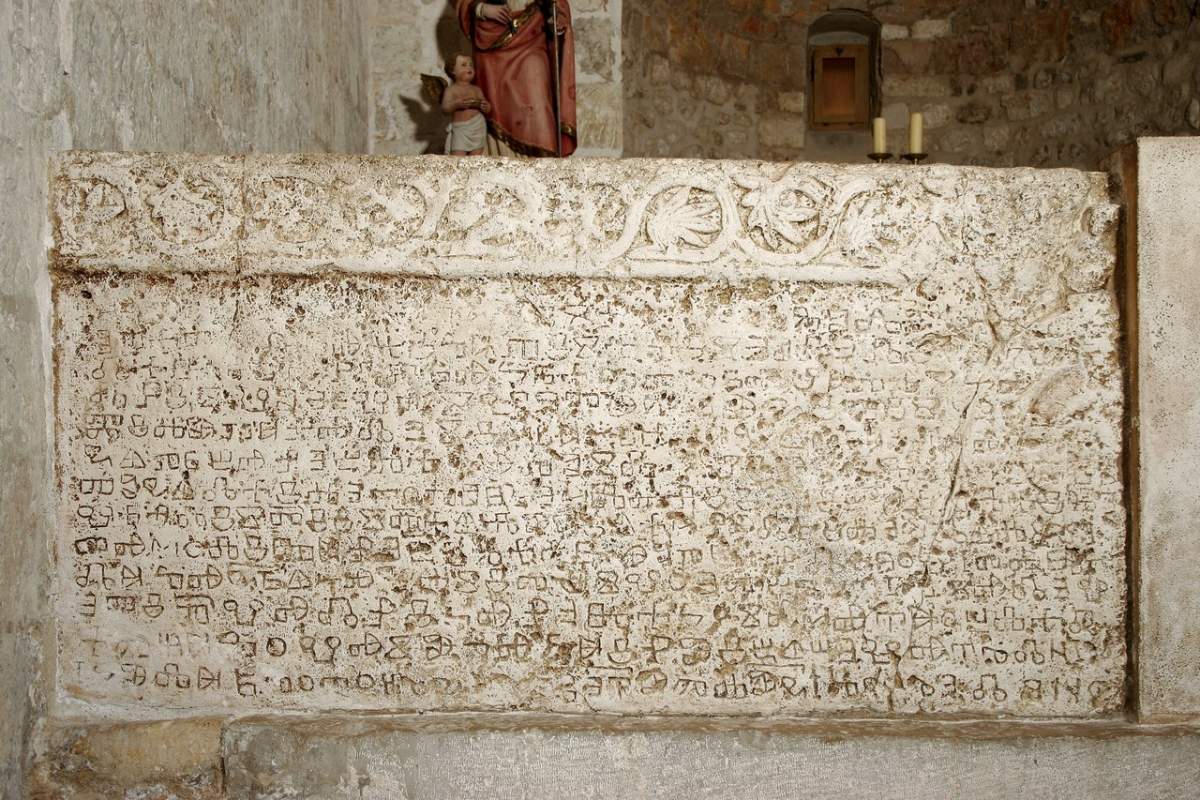 The Baška tablet is a Croatian monument written in the Glagolitic script, which the people of Baška are especially proud of.

So it is unsurprising that the Glagolitic script inspired another well-known project from Baška, the unique Glagolitic path.

The project's idea was to arrange sculptures along the Baška basin, each of which will represent one letter of the Glagolitic script and be placed in a place of special interest for the promotion of Baška and its surroundings.

We invite you to visit all 35 sculptures! 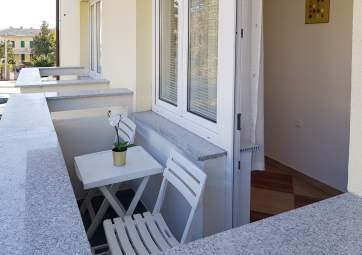 Andy a - for a holiday near the beach 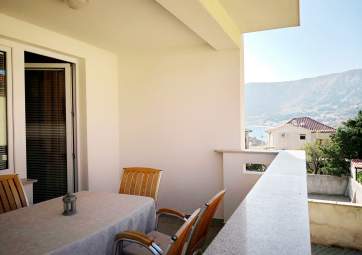 Andy b - nice apartment near the beach 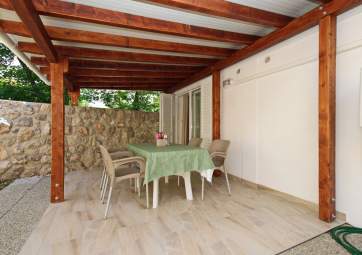 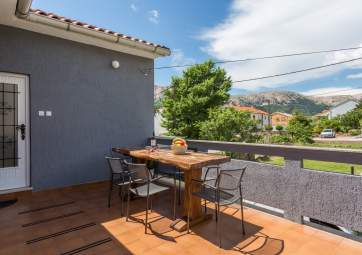 Ariel - with a spacious terrace close to the center