Dobrinj is well known for its unique old town center, its cultural heritage and its incredible vistas. Dobrinj is a small historical town with an extremely rich history. It is located in the center of the island of Krk, on a hill about 200 m above sea level.

Dobrinj is immersed in greenery, it is an opportunity to get to know the wooded side of the island of Krk and enjoy an active vacation. A nearby bay Soline and a cave Biserujka are also a must-see while discovering the Island of Krk. 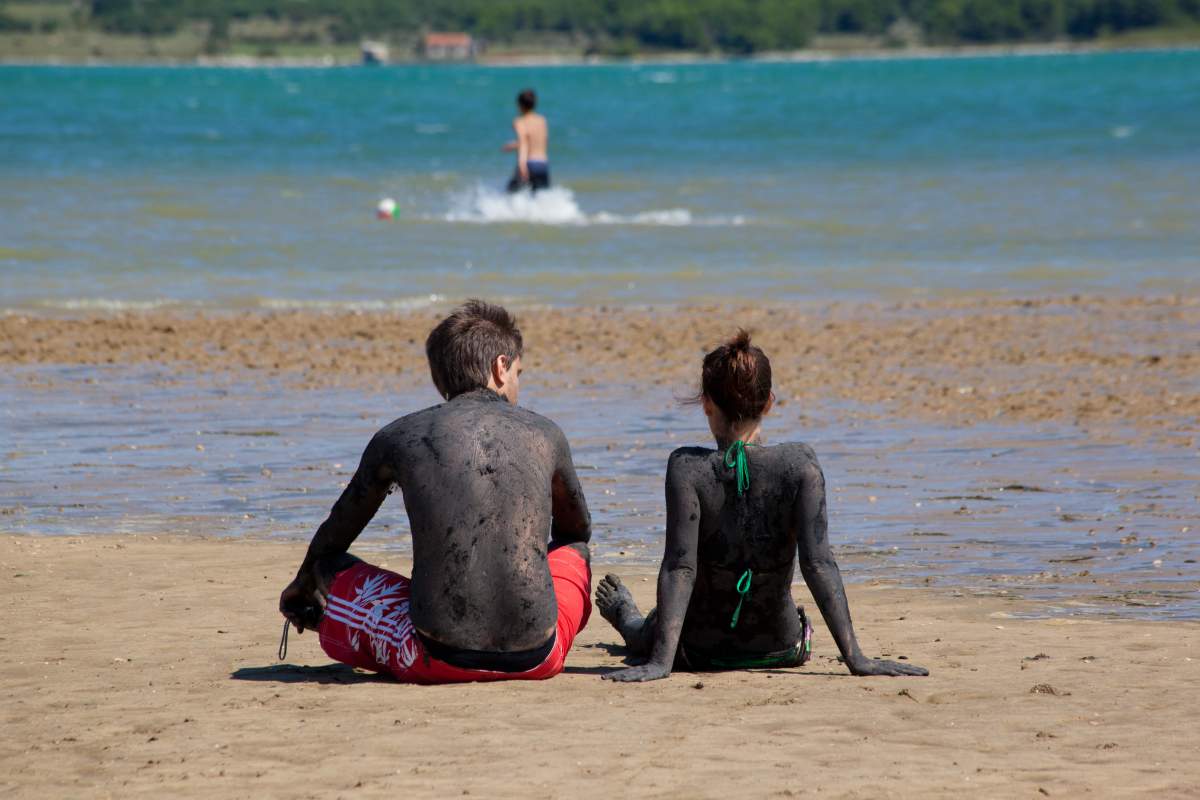 Attractive Krk beaches in Dobrinj are within easy reach

Dobrinj is the perfect choice for families with children and all those who want a peaceful vacation in untouched nature, far from the summer crowds and noise. Bathers will also have a great time in Dobrinj because, even though Dobrinj is not located on the sea, it is only ten minutes away from several attractive beaches on the island of Krk.

Dobrinj is located in the island's interior on a hill about 200 m high, not far from the beautiful east coast of Krk, which faces Crikvenica and Vinodol. Although it is not directly on the sea, near Dobrinj, there are some of the most visited beaches in Krk. In addition, only 5 km from Dobrinj is the bay of Soline, known for its healing mud.

Both bathers who come here for health reasons and those who smear themselves with black mud for fun enjoy this famous Krk beach.
You can also enjoy the view of Soline from the viewpoints in Dobrinj. 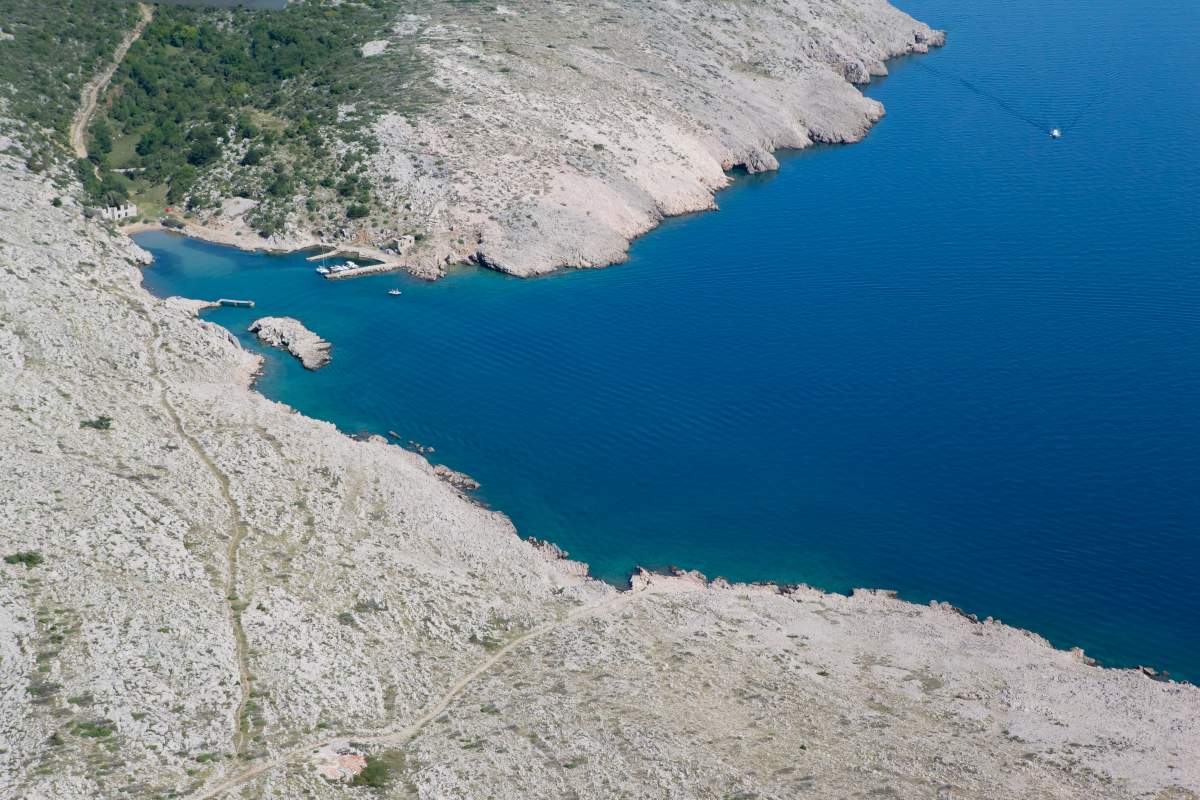 From a series of larger and smaller pebble bays and rocks in the municipality of Dobrinj, we will single out the beautiful sandy beach Slivanjska not far from Rudine, which is considered by many to be one of the most beautiful beaches on the island of Krk.

In addition to Slivanjska, there is Komoriška beach located at the entrance to Klimno, which, in addition to being beautiful, is abundant with shade created by a beautiful pine forest.

Near Dobrinj is the famous sandy beach of St. Marek in Risika.
Beautiful beaches in Šilo are only 6 km from Dobrinj.

A vacation in Dobrinj allows you to enjoy a pleasant small Mediterranean town immersed in nature while the attractive beaches of Krk are at your fingertips.

You will find Glagolitic letters scattered throughout the old town on many Glagolitic stone inscriptions. The Old Slavonic liturgy is especially impressive, which can still be heard in the Dobrinj parish church on major church holidays.

This small town on the island of Krk is one of the medieval castles that, in the past, were known as centers of literacy. Dobrinj Parish Church of St. Stephen is mentioned as early as the 12th century, and Dobrinj, as the center of Glagolitism, is recognized in numerous documents and Glagolitic inscriptions that you will be able to see once you visit the town.

Dobrinj had a well-organized church community throughout the centuries. There used to be as many as 7 churches in Dobrinj, and as many as 15 were located around Dobrinj.

The Parish Church of St. Stephan was first mentioned as early as 1100 and was expanded and reorganized in the 16th and 17th centuries. Especially interesting is the porch (cergan) in front of the church - a gathering place and a fantastic lookout.

Inside the church of St. Stephen, there is also an interesting altarpiece, "Crowning the Mother of God", proclaimed a monument of culture. In addition to the mentioned church, there is the sacral heritage, the bell tower, and the Museum of Sacred Arts (Sakralni muzej) with a valuable collection.

Next to Dobrinj Square and Jardin Park, there is a bell tower initially built in the 18th century. It was damaged by lightning on several occasions and destroyed in World War II. The bell tower of Dobrinj has always been rebuilt and rebuilt.

Stone traces of Dobrinj's past

As you walk through Dobrinj, each stone tells its own story about this ancient town. Some stone traces of a rich past are particularly interesting.

So you will find traditional public measures for grain and oil on the stairs that lead from Placa - the main town square to the park Jardin. These hollow measures were used to pay taxes.

A nearby stone figure - horse head also served as a length measurement.

The Maskeron, a stone portrait by an unknown author from 1738 is very intriguing. The Maskeron was built into the corner of a house on the main town square.

In Dobrinj you can see top exhibitions in the Infeld Gallery. The Infeld Gallery is one of the main attractions of Dobrinj. At the beginning of the 20th century. it was the house of a sailor, Franjo Vušković,  Today, the gallery houses exciting artworks, and exhibitions and hosts numerous other cultural events.

Be sure also to visit the Sacral Museum in Dobrinj, whose most famous exhibit is the 14th-century Paolo Veneziano pre-altar / antependium. 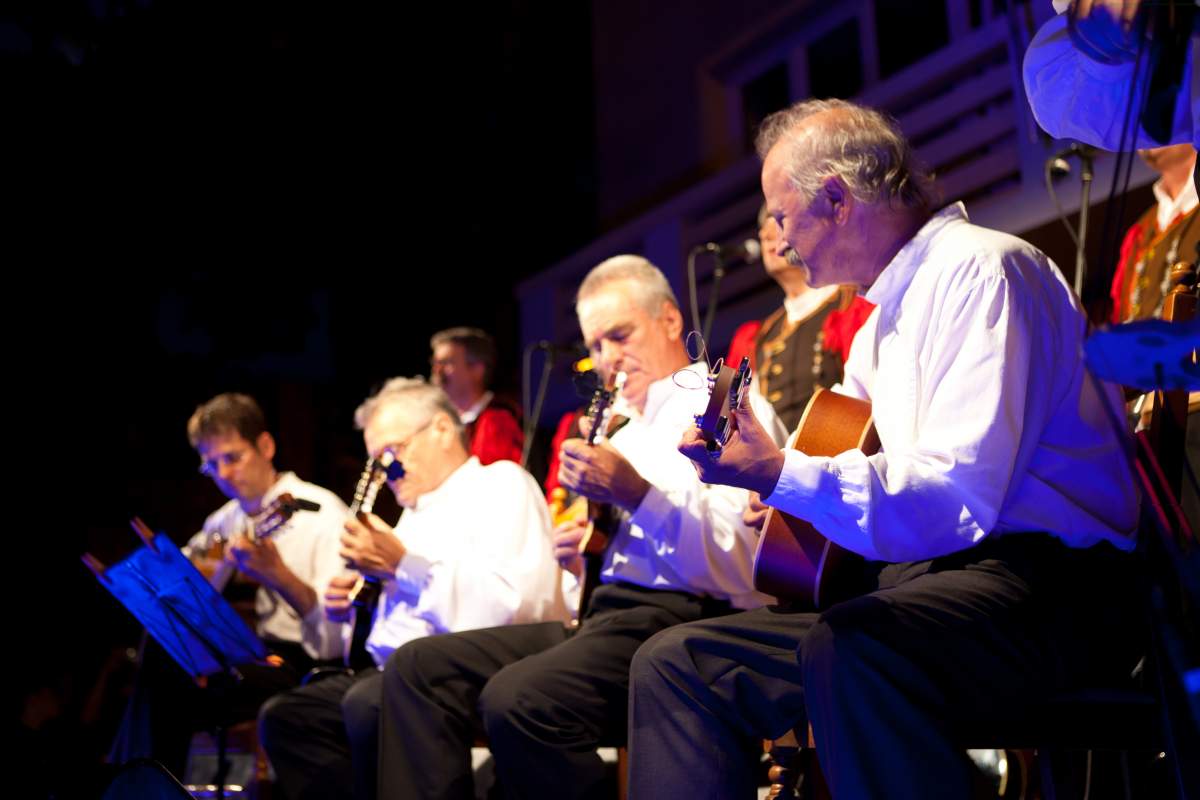 Most of the cultural and entertainment events and events in Dobrinj take place during the summer months just like in any other smaller town on the island of Krk. Dobrinj is widely known for Stipanja, St. Stephen's Day, the patron saint of Dobrinj who is celebrated 3.8. St. Stephen's Day in Dobrinj is known as one of Krk's best and most visited festivities.

The Day of the Municipality of Dobrinj begins with a solemn morning mass in the Old Slavic language. The evening is reserved for folklore dancing and singing of performers from the Dobrinj municipality, followed by an entertainment program until late night hours.

In addition to “Stipanja”, which is celebrated in Dobrinj, numerous fishermen’s parties and concerts of klapa music (traditional a cappella singing) and renowned Croatian performers are held in Klimno, Čižići and Soline (resorts in Dobrinj municipality). These cultural and entertainment events are usually organized in the second half of July and the first half of August.

What to visit near Dobrinj?

Dobrinj has an excellent position for exploring the whole island. Here we have singled out several attractions near Dobrinj that are worth visiting: 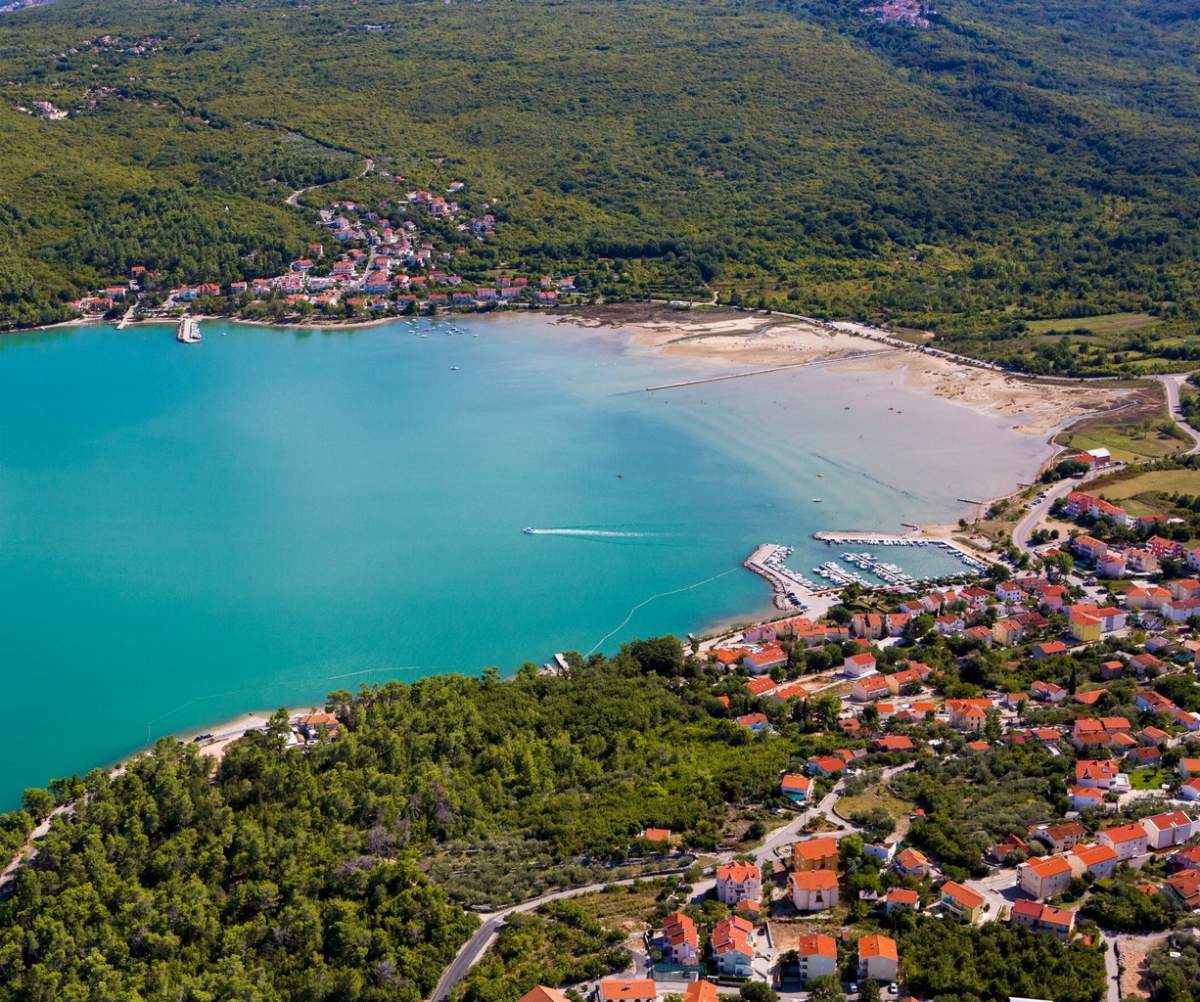 Saltworks in Soline that once brought economic power

At the foot of Dobrinj lies the village Soline. Nowadays Soline is primarily known for its beach with healing mud.In Soline, as the name suggests, there used to be a saltworks, and the remains of the saltworks are still visible today.

Salt was highly valued in the Middle Ages, it strongly influenced history and brought economic power. The Frankopan princes of Krk were the owners of the Krk saltworks. After they conquered the island of Krk in 1480. The Venetians closed the saltworks in Soline. 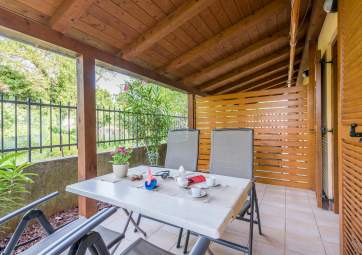 Seafront a - in the center of Klimno, near the sea 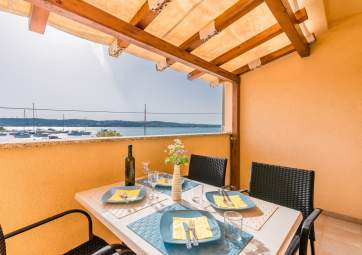 Seafront b - with a beautiful view of the sea and marina 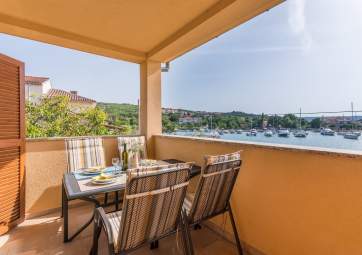 Seafront c - a few steps away from the sea 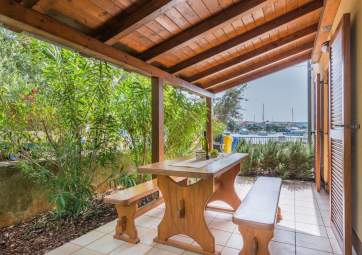 Seafront d - lovely apartment by the sea, with a covered terrace