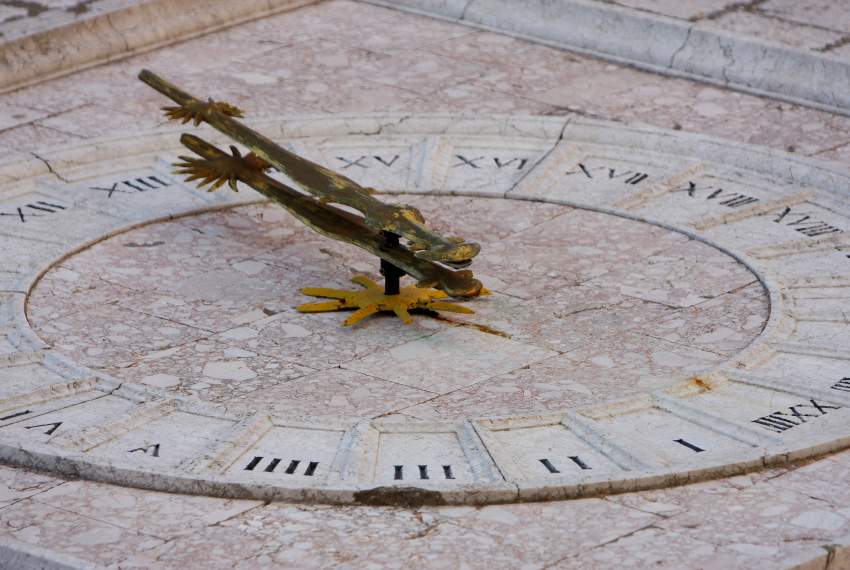 You must be wondering which Krk sights to visit?
We invite you to walk through the old town centers of the historic Krk towns. Dive into the past and explore archaeological sites. Discover the Franciscan monasteries immersed in nature. Get to know the rich Glagolitic tradition of Krk.
Read our suggestions, and for further inspiration, there is also a blog about ten must-see attractions in Krk.

The historic city center of Krk

Enjoy your visit to the old town of Krk! It is one of the oldest inhabited places on the Croatian territory, so it is not surprising that the walk through the historic city center will offer you an unforgettable view of various sights from ancient times to more modern history. What you definitely should not miss while in Krk is Kamplin square, a square that in the past was the center of all city events.

Kamplin square offers a wonderful view of one of the few preserved Frankopan castles, which is a landmark of medieval heritage. The cathedral of Krk and the church of St. Quirinus (Sv. Kvirin) are located on the west side of the square. Apart from the marvelous Romanesque architecture that adorns their exterior, both churches preserve in their interior a rich inventory of Venetian-style features.

A little further away from Kamplin Square, close to the northern city gates, Porta Su, is Glagolitic Square, where Franciscans, Benedictines, Benedictine nuns and Clares once lived and whose convents are still preserved and in function. In addition to the mentioned sights, the streets of the town of Krk also house numerous museums and galleries and are the scene of various events and other interesting happenings that you can enjoy visiting.

To make sure not to miss anything book Krk private city tour with a local guide!

The historic city center of Vrbnik 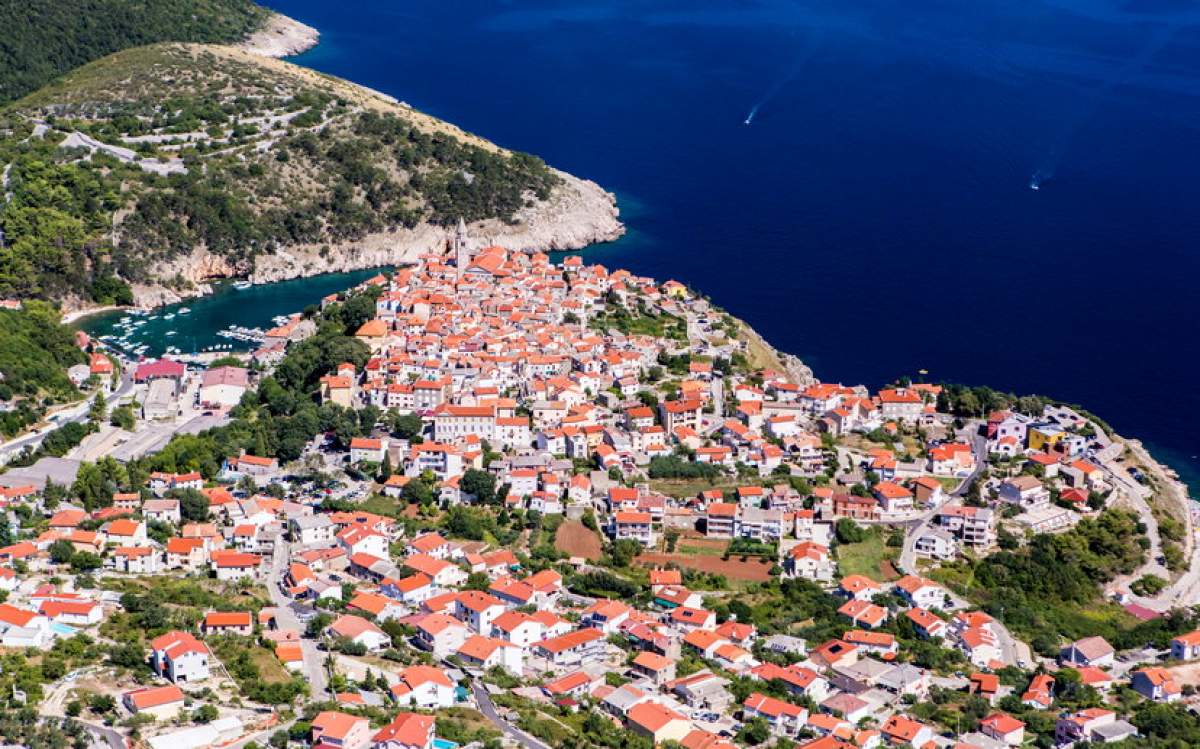 Vrbnik, one of the oldest places on the island of Krk, has been inhabited since the early Stone Age. Its geographical location at the top of the fifty-meter-high cliff guarantees visitors an unforgettable view. A stroll through the old city center will delight all lovers of history and the typical Mediterranean architecture. In the heart of the city, there is the street Klančić, the narrowest street in the world you must definitely visit and try to go through it.

Not far from the narrowest street in the world, at the old market place in the former Rector’s Palace (Knežev dvor), the Vitezić Family Library is situated together with a reconstructed wooden Renaissance printing press where you can find out information about the Glagolitic script and the first Croatian pressman, Blaž Baromić, who was from Vrbnik.

After visiting the Library, take one of the three oldest streets of Vrbnik, Pojana, Roč or Smokovec, and walk to the parish church of Assumption of Mary. When you come to the church, do not miss visiting the beautiful Gothic Chapel of St. Ružarij with an impressive painted vault, the Bell Tower with a lapidary and the Museum of the visual identity of Vrbnik.

The immediate vicinity of the church offers one of the most beautiful views in Vrbnik and if you continue your walk, you will also discover the remains of a medieval tower and city walls.

We invite you to explore Vrbnik, accompanied by a local guide who will introduce You to this charming small town!

The historic city center of Baška 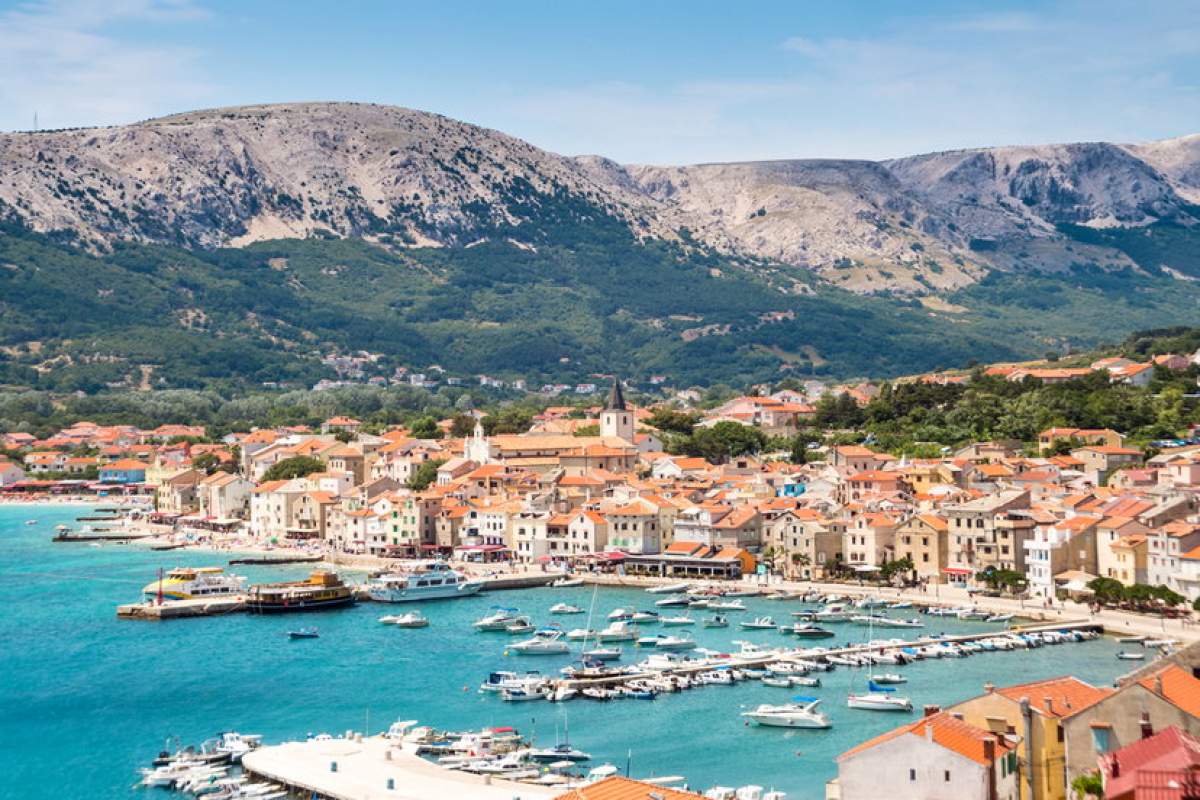 Baška, just like all the other small towns on the island of Krk which have a long history, is also marked by narrow streets and compact rows of houses creating a typically Mediterranean feeling in the old part of the city.

Besides the beautiful beach, Baška is also interesting for its characteristic architecture, numerous cultural and historical monuments and its Glagolitic trail which has attracted the attention of a growing number of visitors over the years.

If you are a visitor to Baška, make sure to visit the parish church of St. Trinity (Župna crkva sv. Trojstva), the church of St. John the Baptist (crkva sv. Ivana Krstitelja) and the small pilgrimage church of Our Lady of Gorica (Majka Božja Gorička) on a nearby hill.

Moreover, there is also the local museum and an aquarium in the very center of the city that will surely impress the youngest fellow travelers.

Discover Baška in the guidance of the local guide!

The historic city center of Omišalj 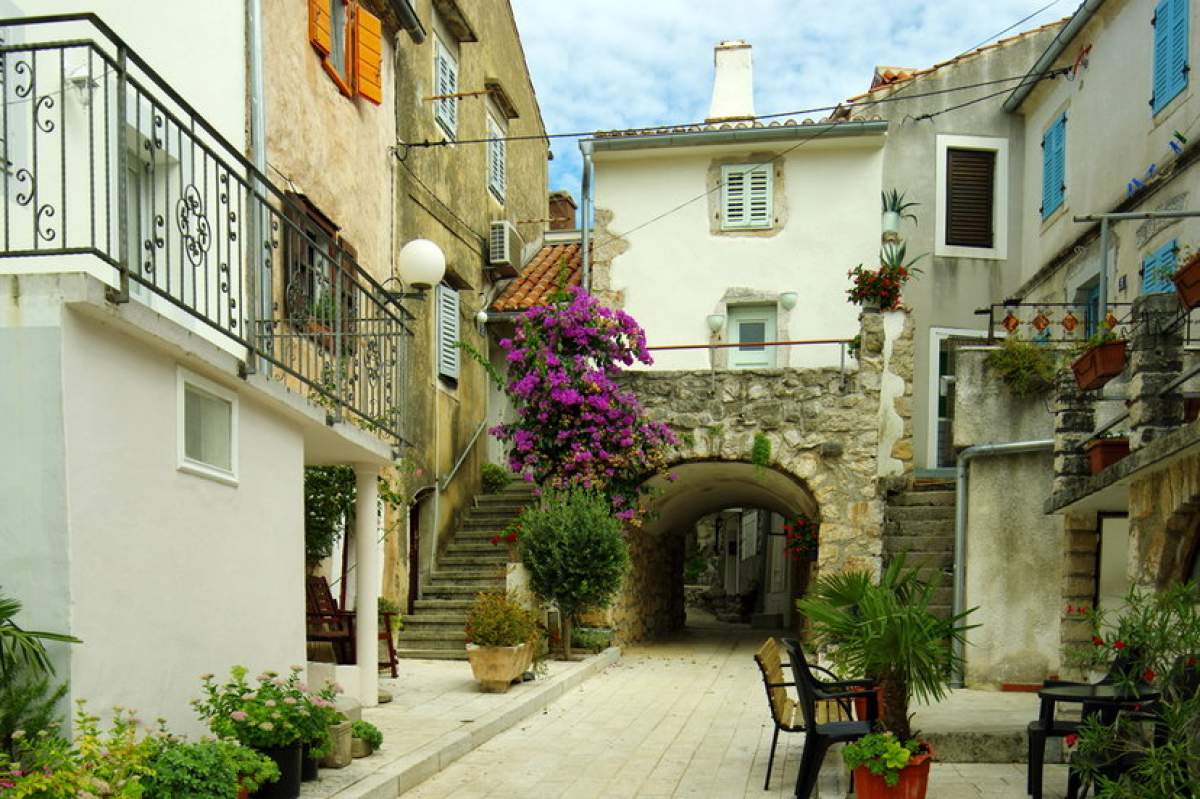 The extremely rich history of Omišalj is and can be traced back to prehistoric times to the present day. Should you find yourself in Omišalj, pay a visit to the parish church of the Assumption of Mary (Župna crkva Uznesenja Marijina), which is of particular historical value for the city.

In addition, do visit the Memorial home of the Krk Folklore (Spomen dom krčkog folklora), where the most valuable exhibits of Krk folklore, from folk costumes, jewelry and instruments to video clips with island’s traditional dances are kept in optimal conditions.

The historic city center of Dobrinj 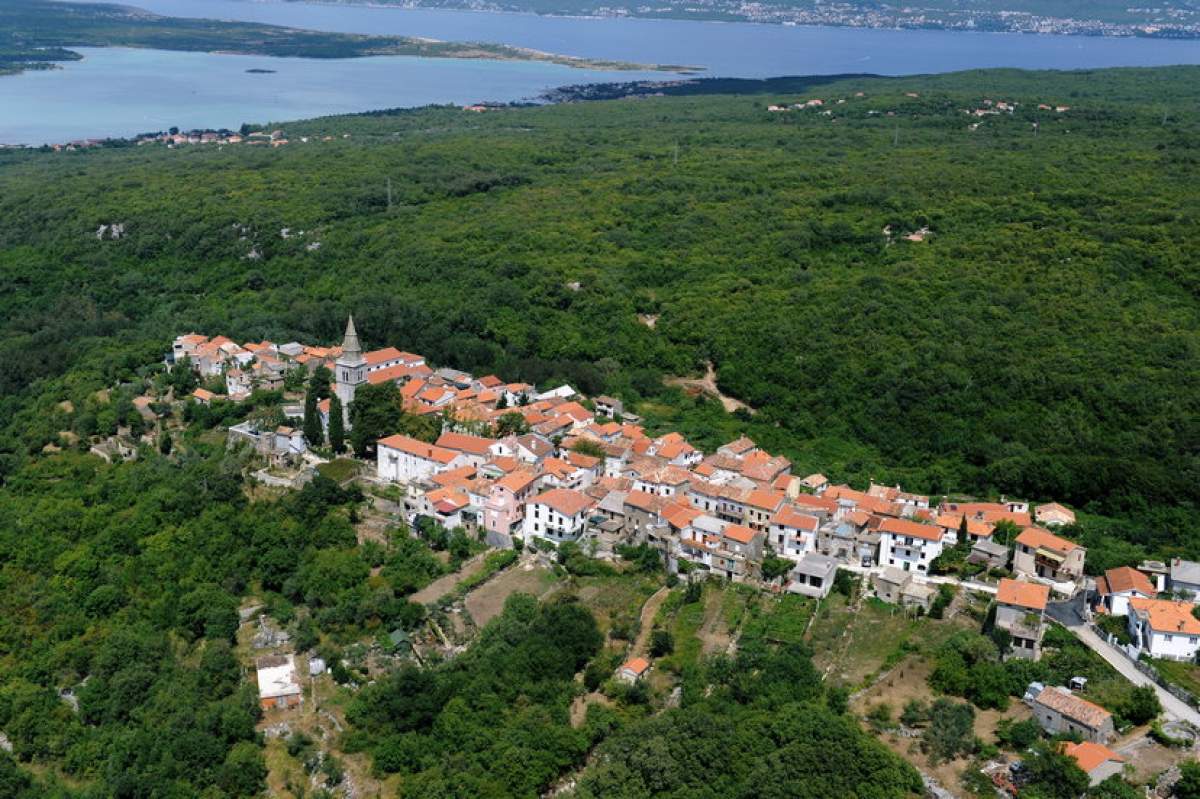 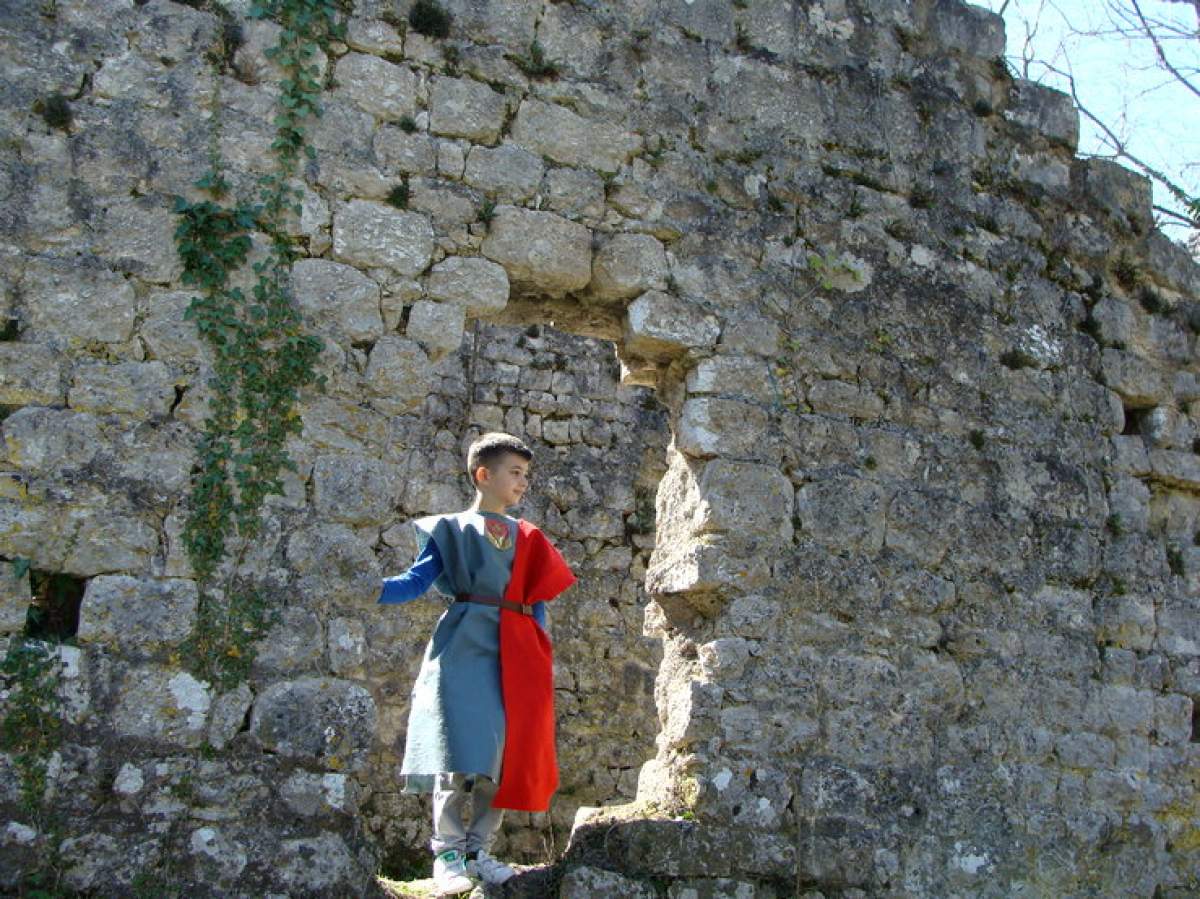 Along with the well-known fortresses and fortified settlements that once belonged to the family Frankopan, there are still the remains of two castles that are extremely valuable items of the historical and cultural heritage of the island.

One of them is the Gradec castle, located in the middle of the forest area not far from the Vrbnik field. The ruins of the Gradec castle are difficult to notice today, even though they are up to seven meters high and easily accessible from the nearby villages of Garica and Risika. The castle was erected far from the seashore, on the old road connecting the city of Krk with the rich agricultural municipalities on the eastern side of the island.

The castle was abandoned in the second half of the 15th century, after the departure of the last count of Krk. Since then, the castle has been gradually transforming into ruin until 1994 when several antique lovers from Vrbnik, together with the contemporary pastor of Kras village did not start work on arranging the access and clearing the site.

Today, Gradec is more and more visited by the local population as well as by tourists and is increasingly becoming the venue of interesting cultural events.

Košljun is a small island that lies in the bay of Puntarska draga. Access to the island is only possible by boat or taxi boat. Although it is somewhat harder to reach, Košljun is today popular among tourists, primarily because of its rich cultural heritage and exquisite atmosphere.

Most of the island is covered by a rich forest which is intended for peaceful walks, meditation, exploration and resident monks who live there in the Franciscan monastery dating from the 15th century.

Today, part of the monastery has been converted into a museum where, among other things, a collection of folk costumes and rare examples of Glagolitic manuscripts are stored. Since the whole island has been transformed into a museum, tickets are charged at the entrance and the fee covers monks’ everyday expenses. Various events, concerts and exhibitions are held on the island for the same purpose.

Baška tablet in the church of St. Lucija, Jurandvor 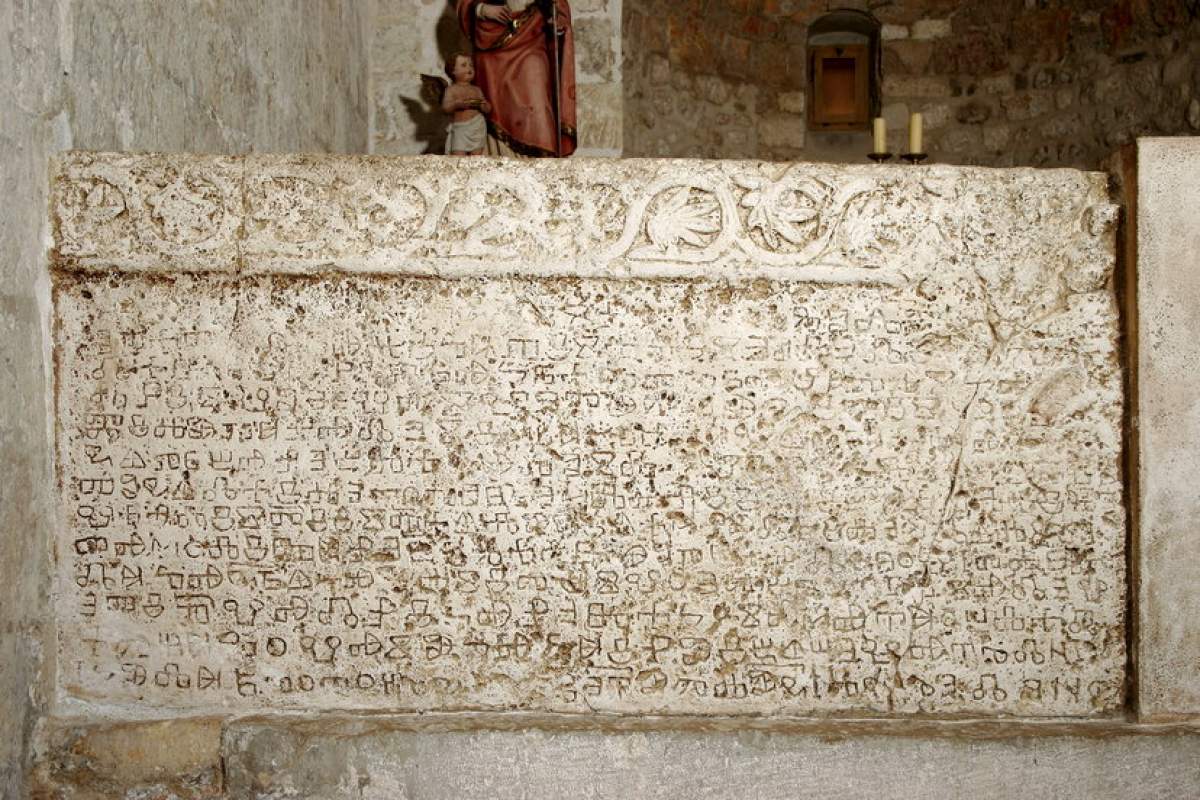 Jurandvor is a small town located near Baška and is best known for the discovery of the Baška tablet which is kept today in the hall of the Croatian Academy of Sciences and Arts in Zagreb, while in the church of St. Lucija (crkva Sv. Lucije) in Jurandvor there is its replica.

Baška tablet is one of the most valuable Croatian monuments. It is a Glagolitic inscription carved on the white limestone in 13 lines and records King Zvonimir’s donation (1075 – 1089) to the church of St. Lucija (crkva Sv. Lucije). Its significance lies in the fact that the name of a Croatian ruler was mentioned in the Croatian language for the first time.

It is the church of St. Lucija with a replica of the Baška tablet in its interior which is the main sight of this small town, which, regardless of its size, is frequently visited by admirers of history, writing and cultural heritage. 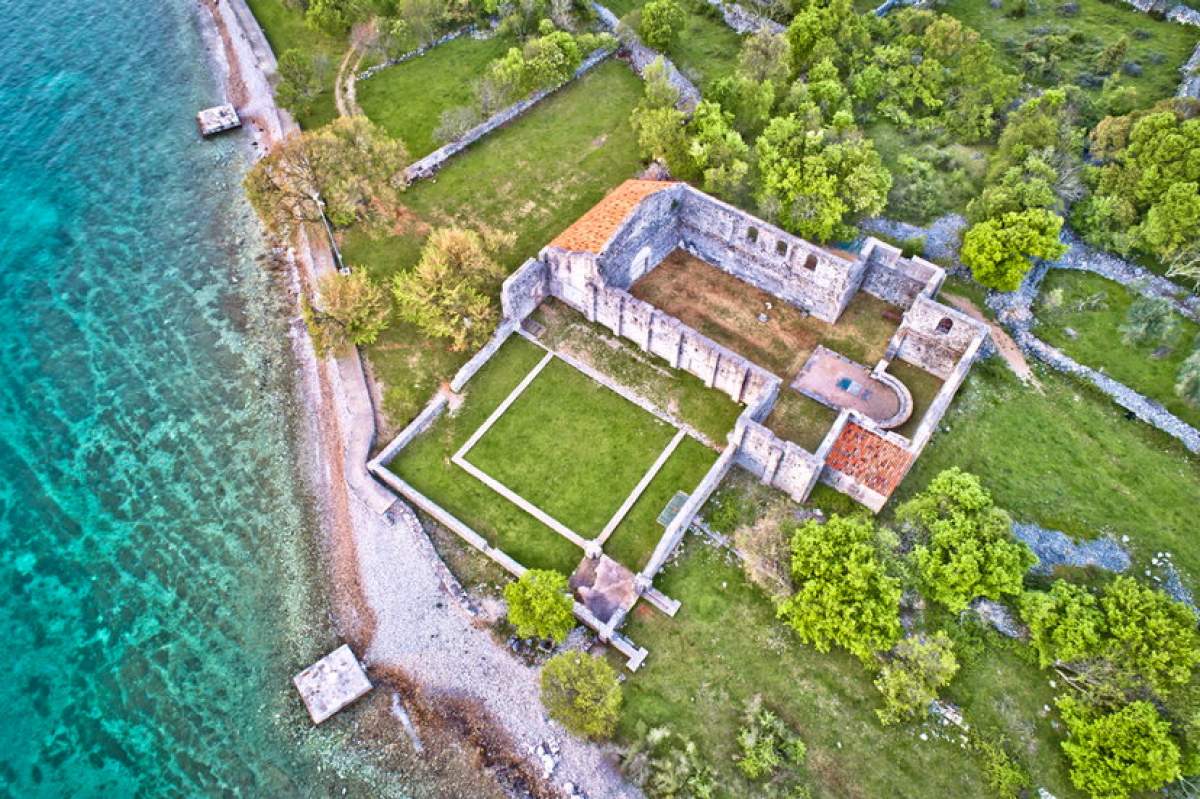 Fulfinum is an ancient Roman city and an early Christian complex in the Sepen cove near Omišalj, which was founded in the 1st century AD to meet the needs of veterans of the Flavian emperors. The sheltered cove enabled the construction of a well-protected harbor and the fertile soil with an abundance of water allowed the development of agriculture.

The city had a forum with the Capitol and the town basilica, harbor facilities with a commercial neighborhood by the sea, a spa, sub-urban communication with cemeteries and a two-stage water supply system.

Unfortunately, during the fall of ancient civilization, Fulfinum was probably one of the first victims. In the 5th century, on the outskirts of this ancient Roman city, an imposing early Christian complex by the name Mirine was built, which is associated with the Benedictine abbey of St. Nicholas (benediktinska opatija Sv. Nikole). 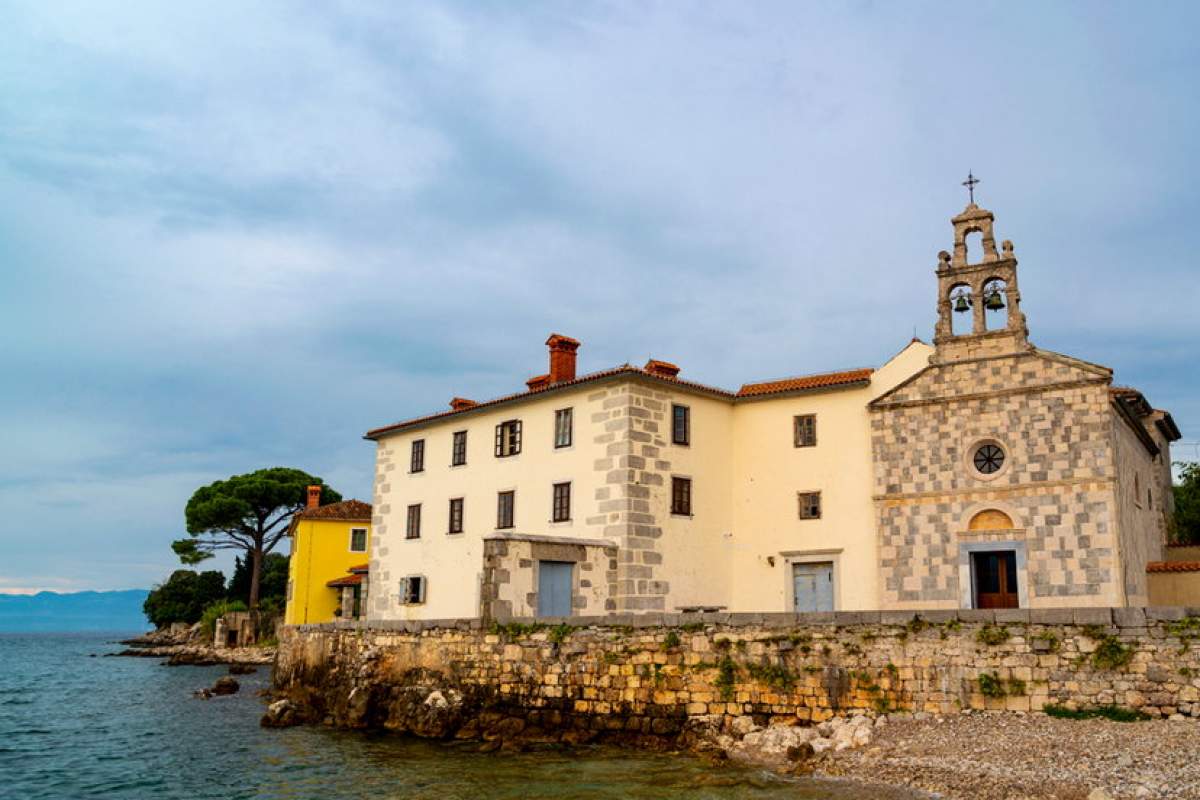 Little churches/chapels of St. Donatus and St. Chrysogonus are well-known Krk sights. The church of St. Donatus (crkva Sv. Dunata) was built at the intersection of the roads leading to Punat, Krk, Kornić and Vrbnik. Although the time of its construction can not be determined with certainty, besides the churches in Nin and Zadar, it is one of the most important monuments o early Croatian architecture.

The church of St. Chrysogonus (crkva sv. Krševana) was built over Čavlena cove, on Glavotok cape, 2 km from Milohnići village. It is located on the ground that descends towards the sea from the south to the north, in a row of terraces.

The monastery of St. Mary in Glavotok has been the center of monastic life on the island of Krk for centuries. The Franciscans have been living in the monastery since 1468. The monks have lived here in seclusion and lead almost a hermit life; they cultivated the land, nurtured the Old Slavic language and the Glagolitic script and provided spiritual care for the residents of nearby settlements.

The construction of the monastery church, dedicated to the Immaculate Conception of the Blessed Virgin Mary, began in 1507 and was completed already in 1509. The monastery, which was renewed and expanded in our time, has become an oasis where the priests, the monks and laymen alike take a rest and seek spiritual renewal.

Baška Glagolitic trail is one of the most interesting projects of Sinjali, the local Baška association, which has been active in the field of culture, ecology and tradition since 2006. The idea on which the project was based was to have sculptures along the Baška valley, each representing one letter of the Glagolitic script and being placed at the site of special interest for the promotion of Baška and its surroundings.

The project proved to be very successful so that 35 sculptures have already been created. The academy sculptor Ljubo de Karina, as well as students of the Departments of Sculpture from Academies in Osijek, Rijeka, Split, Ljubljana, Graz and Prague have taken part in the creation of the sculptures.

Each letter is sponsored by a certain city, municipality or company whose name begins with that letter, so eg. Dubrovnik is the sponsor of the letter D, Trogir of T, and the letter P is sponsored by the Czech capital – Prague! It is interesting to mention that the letter Z “was given” to Zadar, and Zagreb got to sponsor the letter A, the initial letter of the old German name for Zagreb – Agram.

If possible, do not miss the opportunity to visit all the “letters” and get to know Baška better than ever before!