Punat - life with the sea

Punat is located in one of the most sheltered bays of the Adriatic Sea, on the western coast of the island of Krk, only 8 km from the town of Krk. Punat has always lived with the sea and is the nautical center of the island of Krk. Punat will delight you with its old town, centuries-old olive groves, plenty of facilities for active holidays and beautiful beaches located along the 3.5 km long promenade by the sea.

There is also a 3.5 km long seafront promenade, ideal for hiking and cycling. A ski lift facility is located in Punat Bay, which is a very popular surfing location.

Punta Debij and Medane are the most famous beaches in Punat. 500 m from the beach Punta Debij there is a small pebble beach called Mala Krasa where dogs are allowed and can undisturbedly enjoy swimming and playing with other dogs.

Punat is also home to one of the most beautiful FKK beaches in Kvarner. The FKK beach for naturists is located in Camp Konobe.

There are plenty of beaches in Punat, but one of the favorite is the beach Punta Debij. This beach has a rich offer of amenities and water sports, which makes it ideal for all swimmers. Apart from different facilities, this beach is widely known for its underwater pirate park that is one of a kind in this part of Europe. Thanks to the underwater walking helmet that is similar to the former heavyweight diver's helmet for walking underwater, you can visit the underwater pirate park in Punat even if you do not know anything about diving or even swimming.

Punta Debij beach is one of the main beaches in Punat, only 200 m away from the city center. The beach is extremely long, so everyone will be able to find something to their liking. It has been awarded the Blue Flag and besides the clean sea, what makes it so well-visited is a parking lot in the vicinity, a rich offer of catering facilities, deck chair, parasol and pedal boat rentals as well as various water sports (para-sailing, water park, jet-ski, etc.).

Those who enjoy swimming and sunbathing will love the beach Debij, equipped with deck chairs, parasols, various summer amenities and water sports. This beach is ideal for families with children because it offers different amenities for children and teenagers, such as an underwater pirate park, an amusement park, a beach volleyball court, etc.

Only 9 km from Punat, you can visit the village of Stara Baška. There is an interesting panoramic road from Punat to Stara Baška notable for its interesting stone graffiti and beautiful beaches, which attract many swimmers from all over the island.

In addition, there is also a range of beaches near Punat, which are accessible only from the seaside (for example, Golden Bay beach) and the Oprna beach in Stara Baška which is considered one of the most beautiful beaches on the Adriatic. You can reach Oprna either by the sea or by hiking across the hills.

Punat organizes many interesting events. These include numerous sports, enogastronomic, cultural and entertainment events, happenings and festivals. Sports events include the International Sailing Regatta "CROATIA CUP", which has been organized in late May for 20 years, and symbolically marks the beginning of the tourist season. In addition to the sailing regatta, there are also regular bicycling events, organized hiking tours, fishing and many other sports events.

Cultural and entertainment events include the Velvet Festival, which has been held from 2016. The main music program is held every year on the beach Debij in Punat on two festival stages, while other festival activities take place in the very center of the city. The Velvet Festival is a festival that is popular not only on the island but also more widely as a festival that hosts some of the most interesting and most promising authors and artists of domestic, regional and world music scene.

In addition to the Velvet Festival, there are different exhibitions, shows, fishermen’s parties, concerts of pop and classical music and other interesting events which are organized by the locals.

For lovers of classical music, there are concerts on the island of Košljun with the Franciscan monastery. Interesting exhibitions are also organized in the "Toš" gallery.

How did Punat get its name?

Punat is situated in one of the most protected bays in the Adriatic, on the western coast of the island of Krk, only 8 km from the town of Krk. Punat was first mentioned in 1377, and was probably named after the ancient bridge (pons) believed to be connecting Punat with the peninsula Prniba, which is located opposite the town. Prniba is nowadays a green oasis for active holidays.

The traces of inhabitants date from prehistoric times, the period of the Illyrian population, to the Greeks and Romans. Therefore, we assume there was an older settlement in Punat Bay during the Illyrian and Roman times.

Punat - nautical center on the island of Krk

In addition to farming and cattle breeding, the inhabitants of Punat were always fishermen and ship builders. In 1906, an Austro-Croatian steamship union was founded, whose first steamer Frankopan maintained the shipping service from Punat to the mainland.

The shipyard in Punat still operates today as part of Marina Punat, which is the oldest one in the Adriatic. Marina Punat was founded in 1964, and today it has 850 sea berths and another 500 dry berths.

Today Punat is one of the largest Croatian nautical centers. Punat is widely known for its marina where tourists can either rent a boat or anchor their vessels, take a sailing course or just a walk and enjoy the view of the Punat Bay.

Punat and the tradition of olive growing

Punat is known for its long tradition of olive growing. In addition to the top-quality extra virgin olive oil, you can take an enjoyable walk on the marked hiking trails passing through the centuries-old, well-tended olive groves and participate in specially organized olive harvesting.

On numerous marked hiking and cycling trails through the luxuriant olive groves of Punat, you will enjoy the fresh air and a stunning view of the entire Bay of Punat.

Visit the olive grove with a panoramic view of Punat and the island of Košljun. Here you can learn a lot about the production of olive oil, taste the top Krk olive oils and other island specialties.

In the embrace of Punat Bay lies the islet of Košljun with a Franciscan monastery dating to 1447.

Košljun is one of the places that is worth experiencing during your stay on Krk, primarily because of its rich cultural heritage and special atmosphere.

The greater part of the island is covered by a rich forest, which is intended for peaceful walks, meditation, research, and the monks living there in a Franciscan monastery from the fifteenth century. There are 540 species of plants and mushrooms on only 6 hectares.

Today, a part of the monastery has been turned into a museum where, among other things, a collection of folk costumes and rare examples of Glagolitic manuscripts are stored. In addition to its rich sacral heritage, Punat also delights its visitors with an interesting ethnographic collection.

Various events, concerts and exhibitions are held on the island.

Access to the island is possible by boat or taxi boat. Anyone who wants to visit Košljun can do so thanks to the "barkarioli" (boat owners) that regularly maintain the 10-minute ride from Punat to Košljun and back.

In addition to Košljun, you should definitely visit the nearby place Stara Baška, which is only 9 km away from Punat. A panoramic route with interesting stone graffiti leads to Stara Baška and passes by beautiful beaches which attract a lot of swimmers from all over the island of Krk. 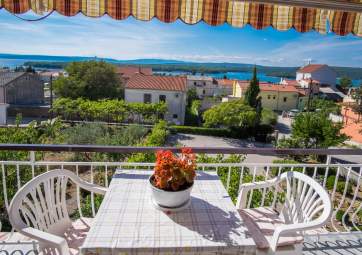 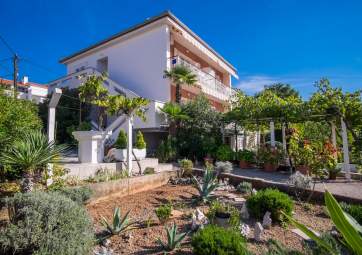 Kate 2 - room in a quiet street 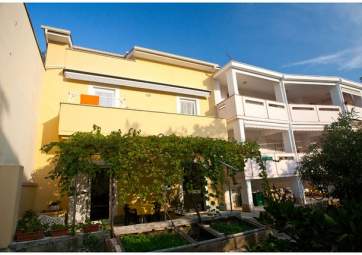 Julia - in the center and close to the beach 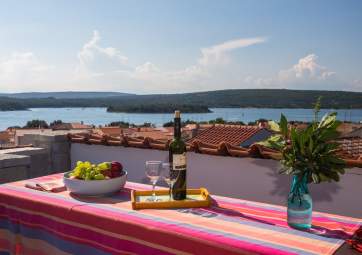