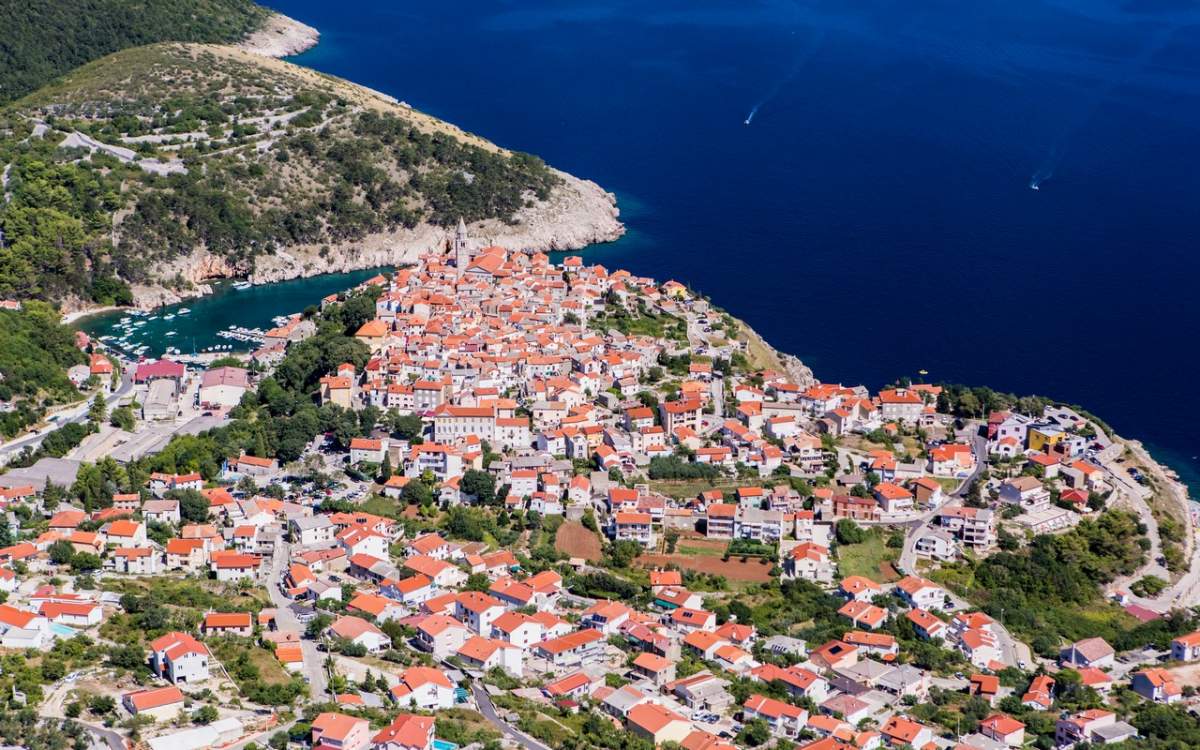 Vrbnik is an ideal choice for your family and romantic vacation. You will be enchanted with its old town core, historical heritage, interesting beaches, tastes of wine and original Krk dishes and unique vistas ...

You just have to see Vrbnik! Vrbnik is situated on the east coast of the island of Krk in Kvarner Bay. The old town settled above the sea is really enchanting. This ancient, stone-built town, which appears to be emerging from the sea and immersing into the blue sky above it, was built in harmony with nature.

Vrbnik has around 900 inhabitants during the winter period and around 2000 inhabitants during summer. Vrbnik is the right choice for all who do not prefer mass tourism but are in search of original Mediterranean charm. The one who experiences Vrbnik once always comes back... Find out why! 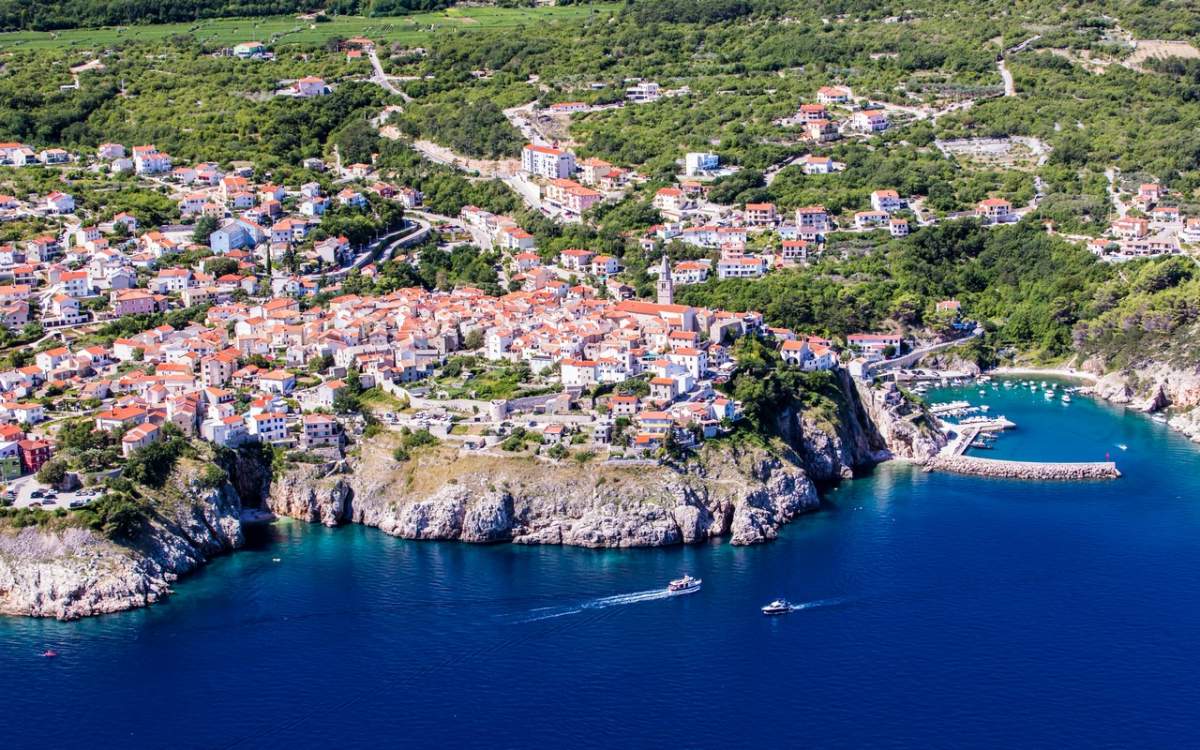 Beaches in Vrbnik and surroundings

Vrbnik is known on the island and beyond for its beautiful pebble beaches, some of which offer a variety of facilities. In contrast, others provide peace and privacy and are still easily accessible by car.

In the following, we highlight several of the most beautiful beaches in Vrbnik, where we advise you to swim if you find yourself in Vrbnik or its immediate surroundings. 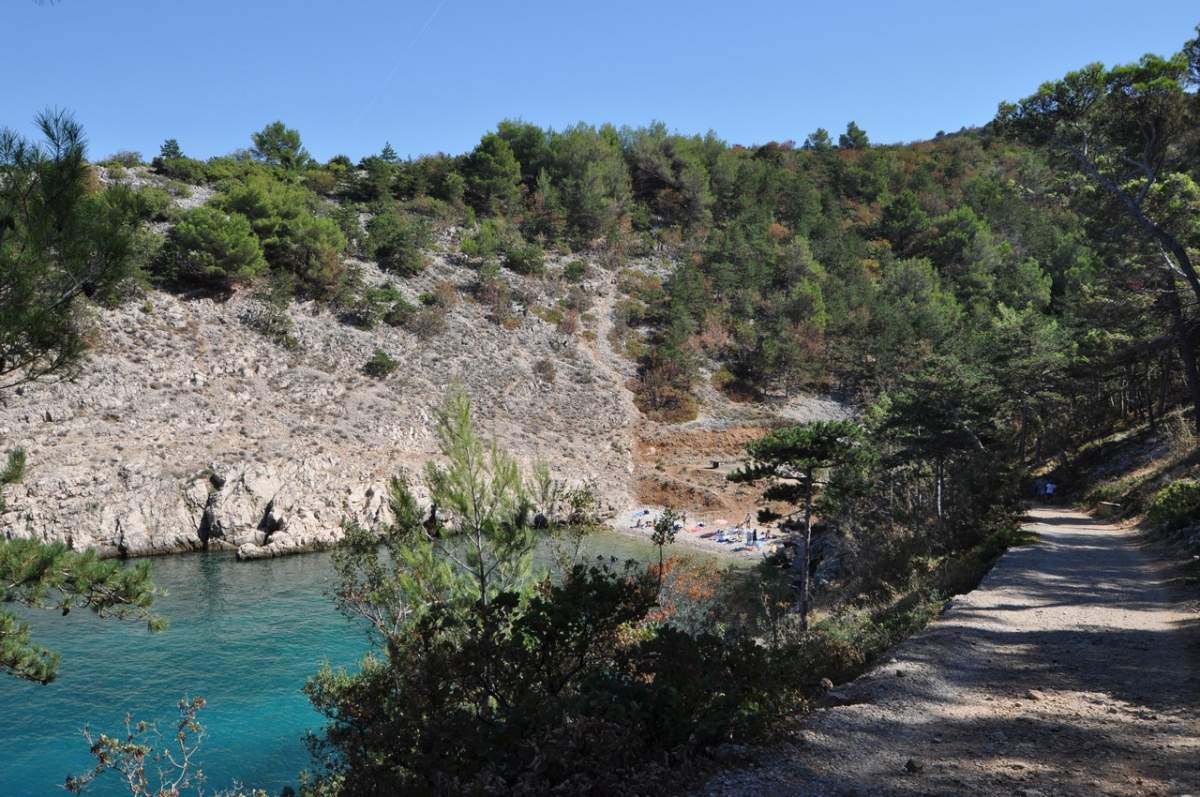 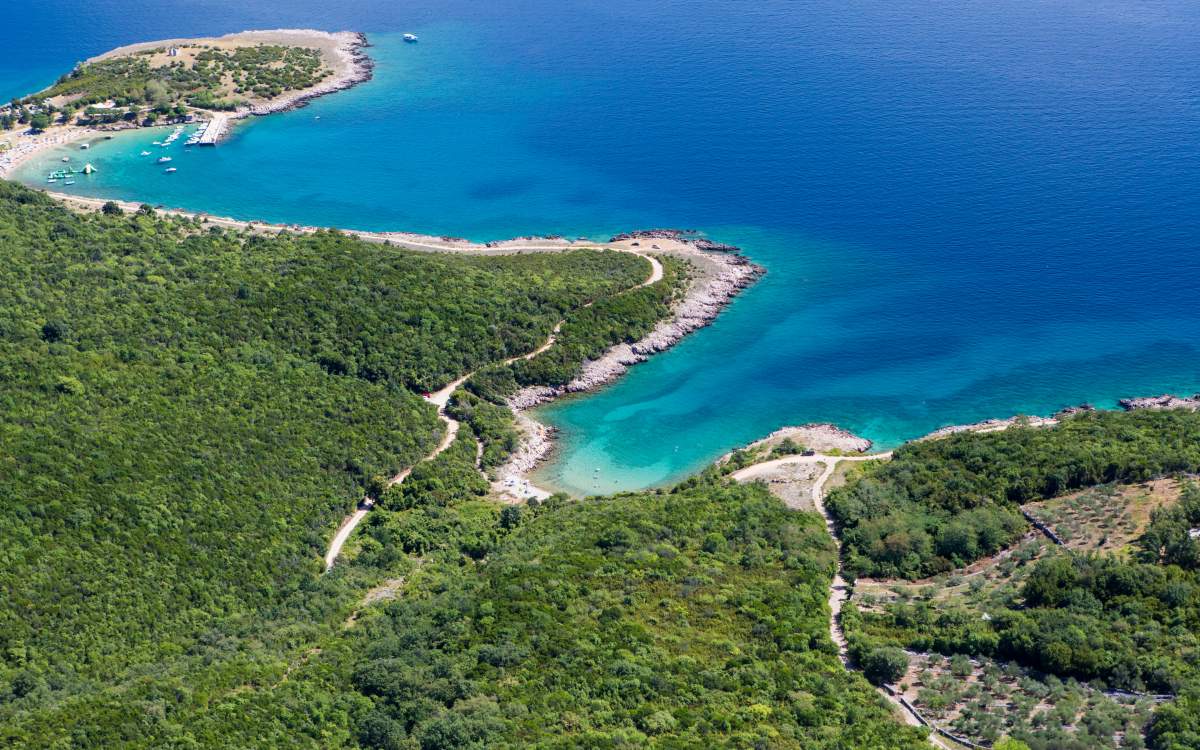 Vrbnik is a small seaside town, which guarantees a visit to an exceptional cultural and sacral heritage. Its beauty is especially appreciated by artists whose source is inexhaustible inspiration. Numerous fun, cultural, enogastronomic and sporting events have been held for many years in Vrbnik.

Most of these events take place in the summer months, and the main events are two festivals, which symbolically mark the beginning and the end of the summer. The first event is “Ivanja”, the central social and church event celebrated on June 24th.

The other one is Days of Wine, which have been held the last weekend in August since 2004. Here we bring you an overview of the most interesting events in Vrbnik: 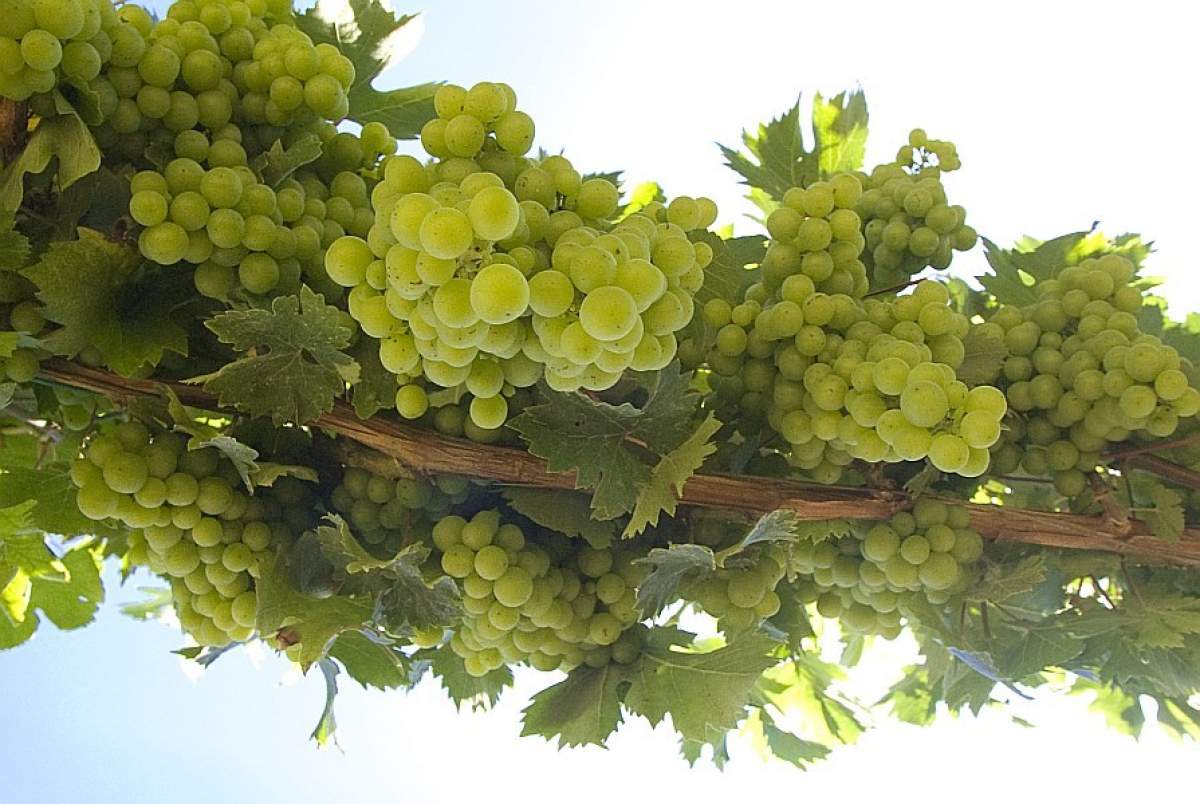 Vrbnik is widely known for its autochthonous grape variety - Vrbnička žlahtina. Everyone who has visited Vrbnik at least once remembers that famous dry, white wine. So it is not surprising that Vrbnik and Žlahtina have become synonymous with each other over the years.

Vrbnička žlahtina is a high-quality dry white wine produced from an autochthonous variety, specific in that it thrives only in the field of  Vrbnik. The Vrbnik field is an idyllic place, and the specific valley at the foot of the hills and the sea is a place of a unique combination of Mediterranean plants and vegetation, where sea and mountain air meet.

Žlahtina originates from ancient varieties, but it was not until sometime in the 1980s that regeneration began, after which it experienced the first real boom in the market.

Žlahtina is a light yellow to straw yellow wine with a delicate aroma and refined characteristic taste. The freshness it possesses is a characteristic of the northern Adriatic climate to which this vine has adapted. 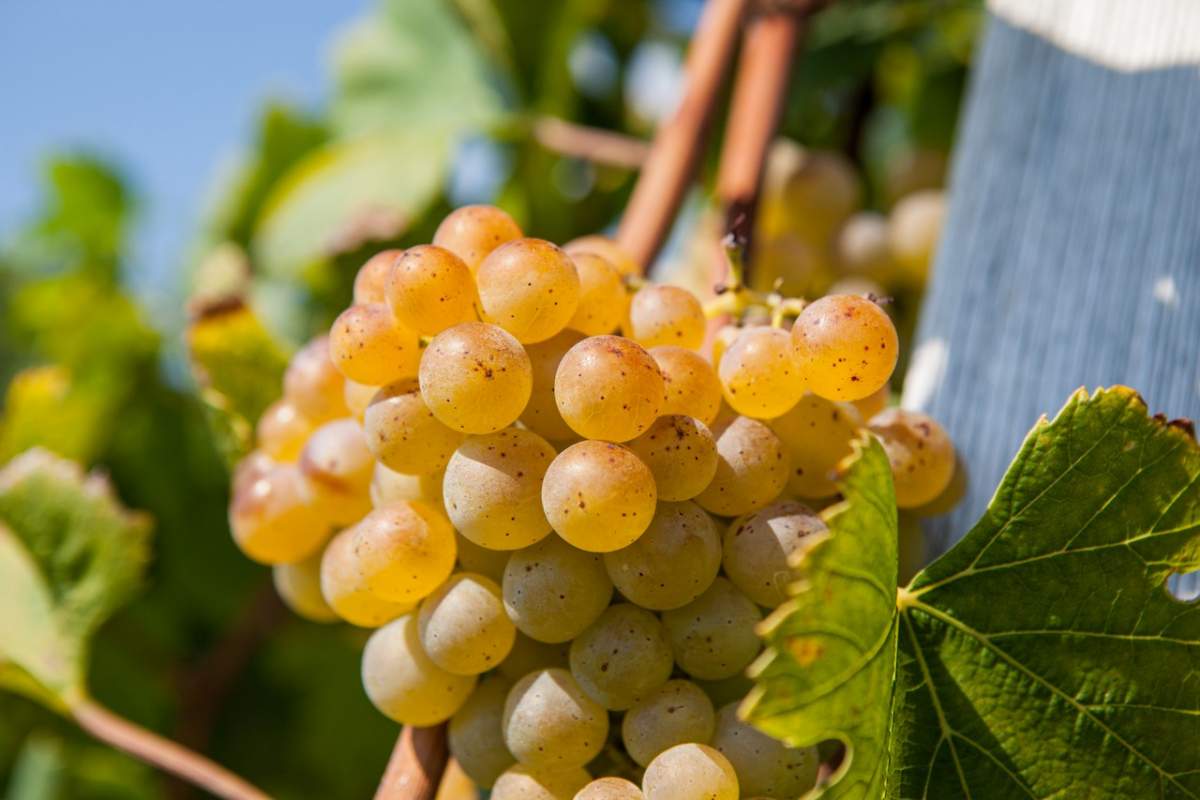 Considering the climate and location, Žlahtina is low in alcohol, around 11.5%, and it is not a wine designed for aging; it is best drunk like a young wine. It goes best with sheep's cheese, fish and seafood specialties, and white meat dishes.

Numerous interesting things are connected with Žlahtina. One of them is that the origin of Žlahtina from Vrbnik remained undiscovered since analyses showed that its DNA does not match any other variety worldwide. 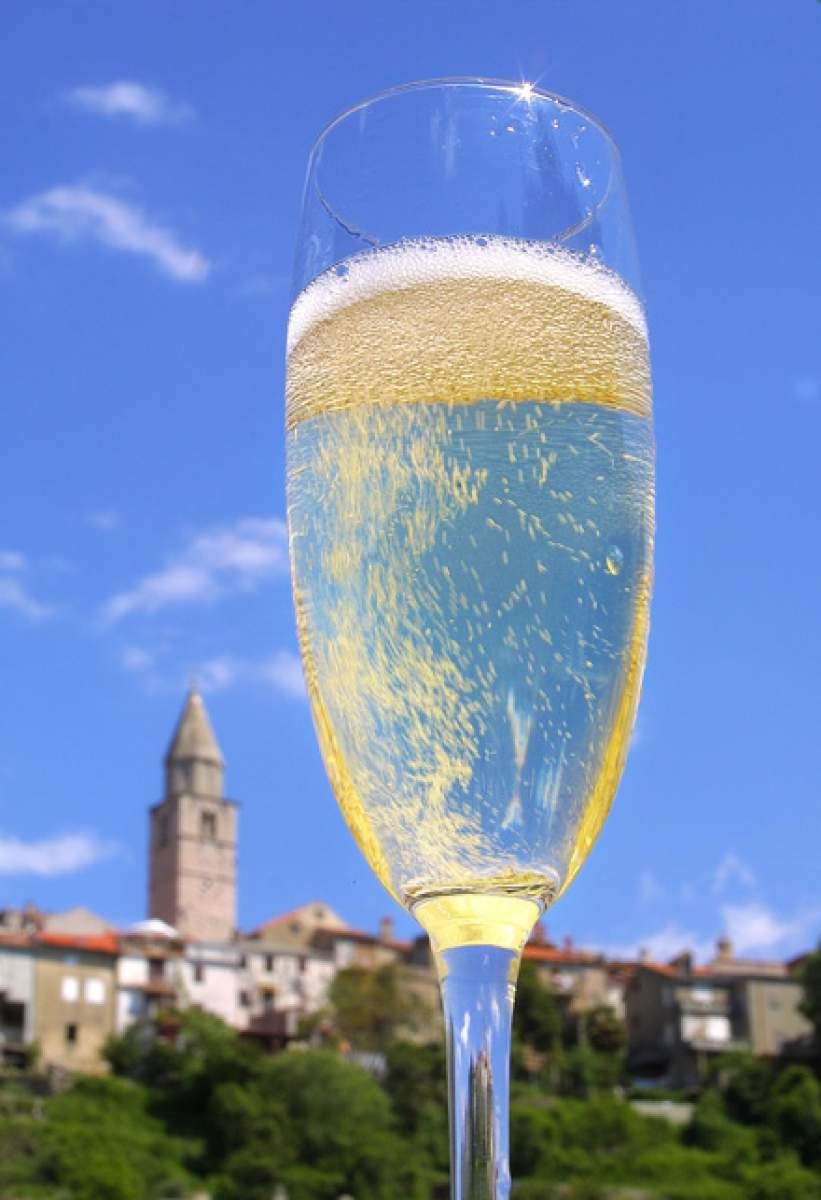 It seems that our ancestors also knew this as its name suggests. The name comes from the Old Slavic language and means noble. It is also interesting about Žlahtina that it is the best-selling bottled wine in Croatia, with almost a million bottles sold annually.

We invite you to taste this unique wine in one of the many wineries, tasting rooms, taverns, or restaurants, and take a bottle with you that will remind you of Vrbnik at home. 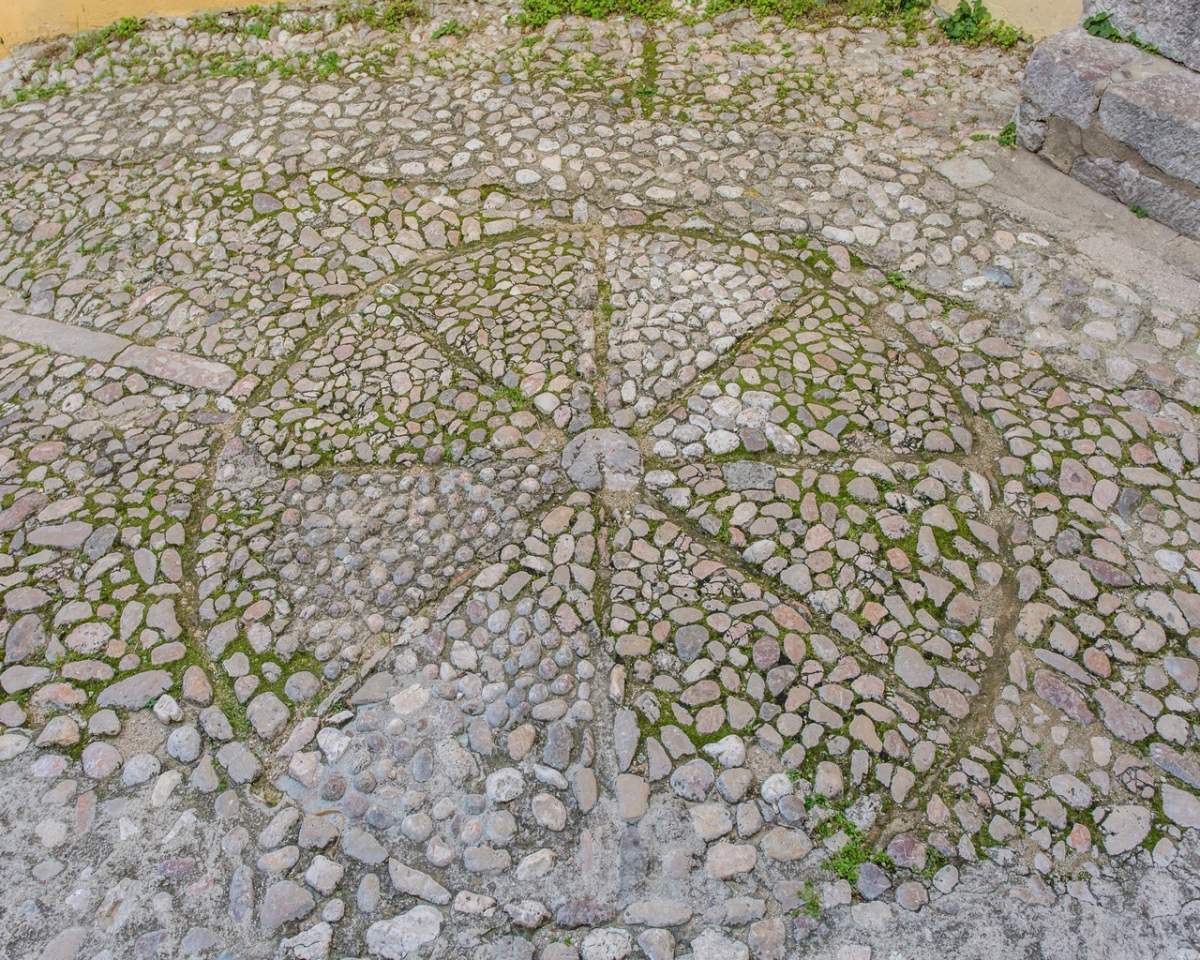 Vrbnik is one of the oldest settlements on the island. Its close area was inhabited in prehistory - the earliest archaeological artifacts found in Vrbnik's vicinity can be dated as early as 4000 years B.C. (Neolithic Age).

Just opposite of Vrbnik, on a hill-top overlooking Vrbnik's harbor from the north, are remains of a Bronze Age settlement (1200 y.B.C.) whose thick dry-stone walls can still be seen. There is also material evidence of life left by Illyrian tribes Japodi and Liburni (Iron Age) and Romans living in the Vrbnik area. 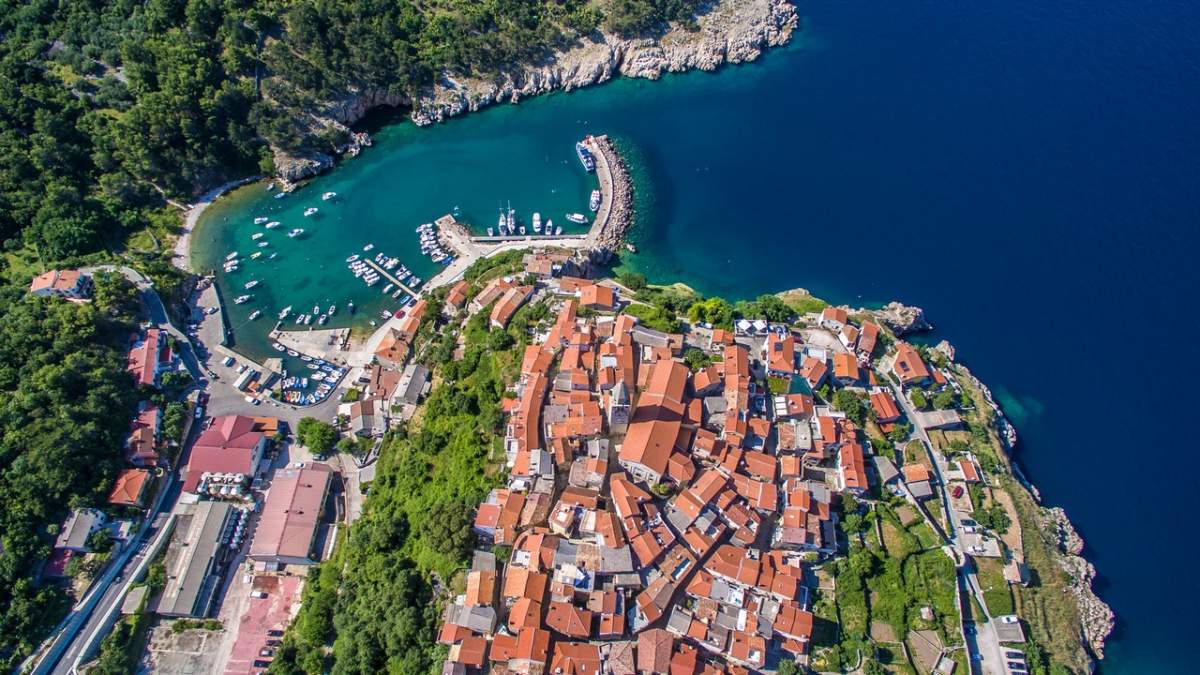 At the turn of the 6th into the 7th century, the island was inhabited by Croats who built a well-fortified town on the inaccessible rock, which has been shown to be a great defense in the wars.

Vrbnik was first mentioned by that name in „Deed of Donation of Glorious Dragoslav“ dating from 1100.y.A.D. Many ruins of small churches and chapels can be seen in and around Vrbnik, some of them more than 1000 years old. 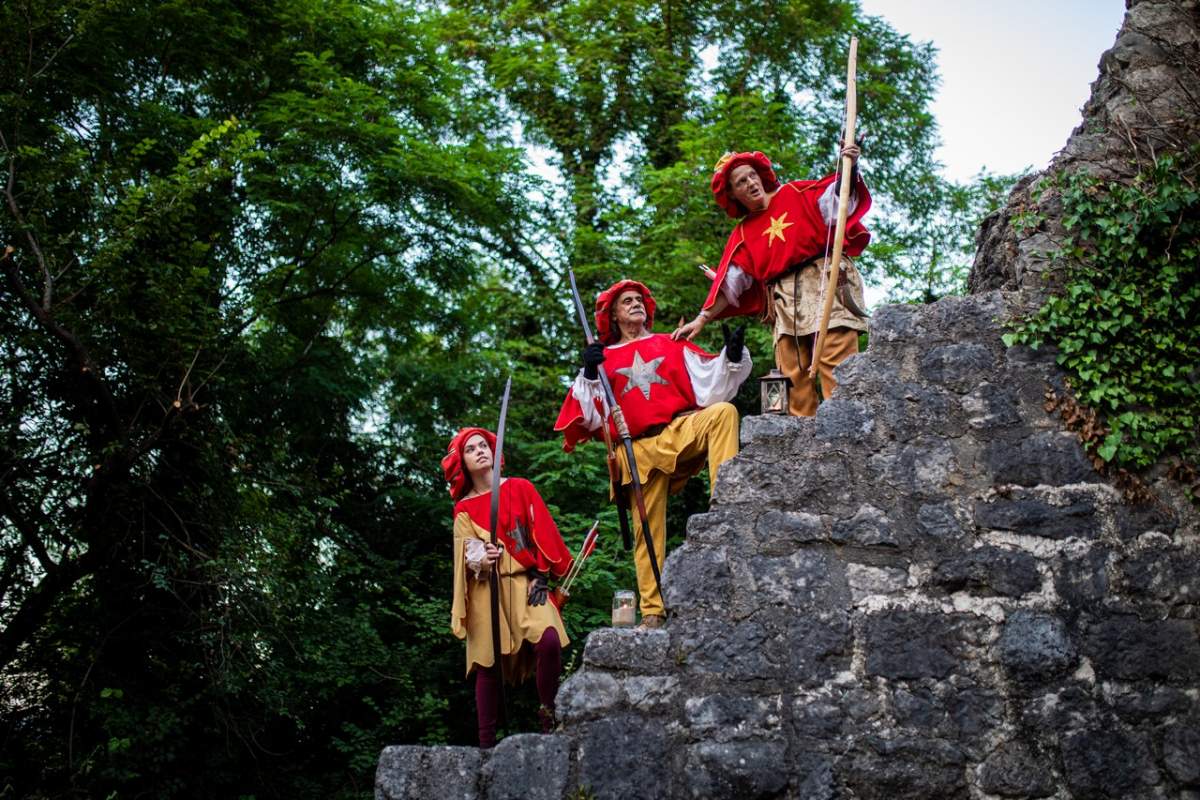 The history of Vrbnik is closely related to Frankopan counts of Krk. The Frankopan family- princes of Krk played a significant role in the history of Krk and Croatia. It is said that they called their possessions in and around Vrbnik their patrimony, which may imply their Vrbnik origin.

The ruins of their oldest known castle Gradec can still be seen near the Vrbnik Field. Under the rule of Frankopan family Vrbnik flourished and reached its peak as a well-organized urban environment in which life was regulated by the Vrbnik Statute of 1388.

It was written in Croatian in the Glagolitic script (by origin, it is the second Croatian Statute of that kind). The Vrbnik Statute is a very important source of knowledge in Medieval law and also a splendid testimony on the high civilization level of the town in that period. 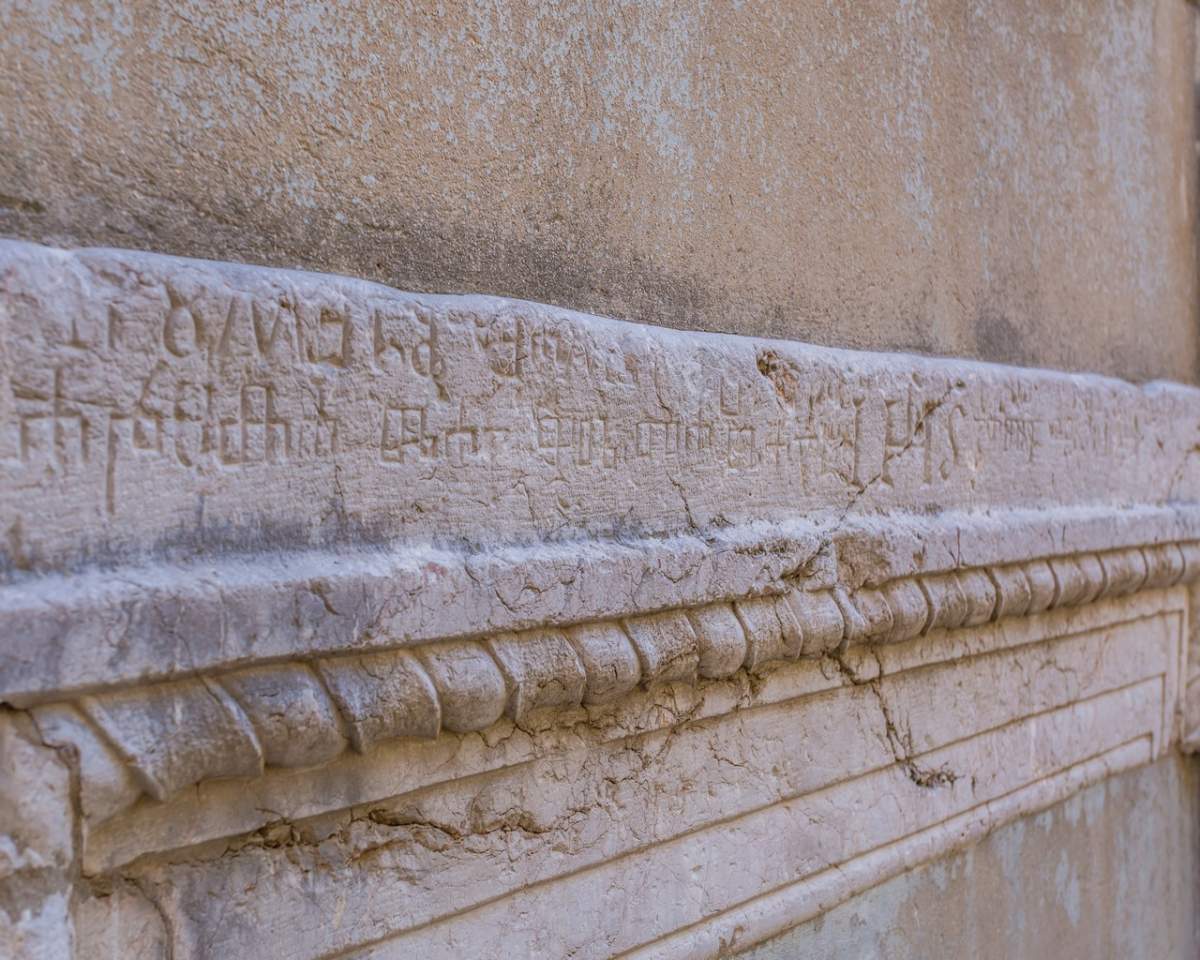 Vrbnik - the cradle of the Glagolitic alphabet

Vrbnik is known worldwide for its exceptional Glagolitic cultural heritage. Glagolitic script is the oldest Croatian script dating from the 9th century AD and, significantly, one-quarter of all preserved Glagolitic manuscripts are from Vrbnik.

For centuries, Vrbnik has been an important cultural Glagolitic center with a Glagolitic scriptorium producing the many preserved manuscripts. Many of which are now kept in renowned world libraries.

The first Croatian printer of Glagolitic works, Blaž Baromić, founder of the Senj printing company, was also raised in Vrbnik. 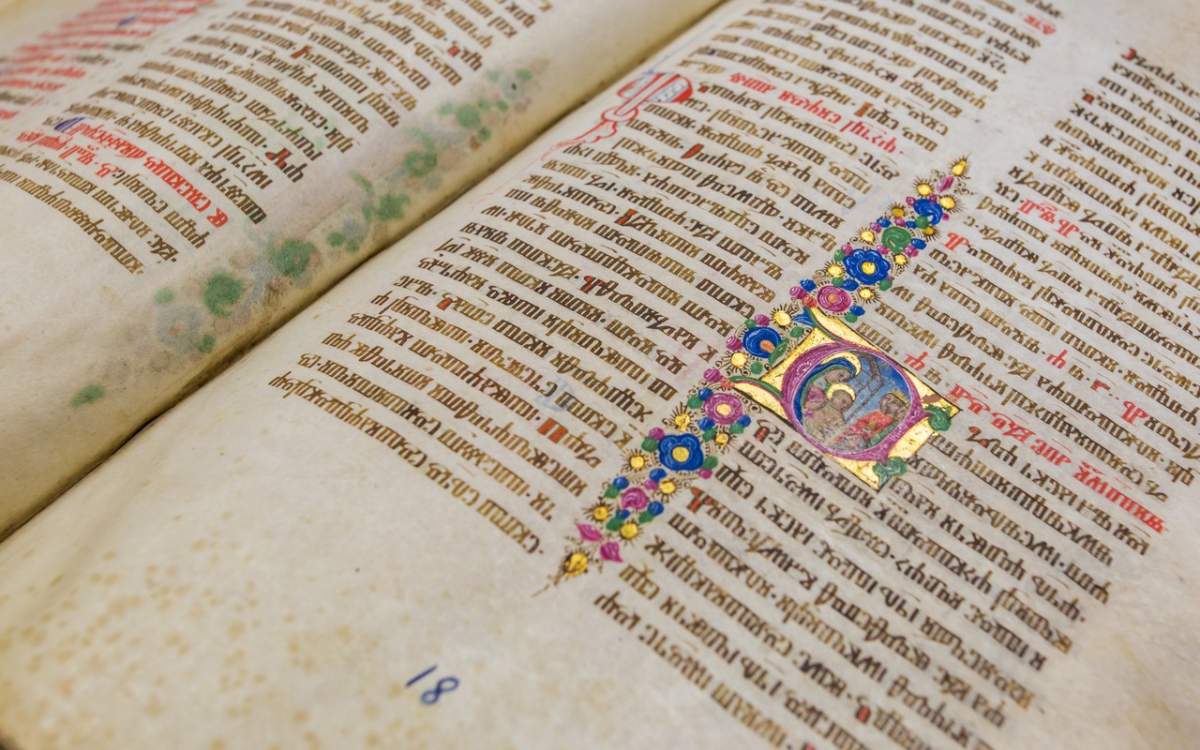 Most of Vrbnik's Glagolitic heritage is kept in the Vitezic Family Library, founded by Dr. Dinko Vitezić. It was opened to the public on July 10th, 1910, and is now located on the second floor of the former Rector's Palace (Knežev dvor), situated on the Square of Vrbnik Statute (Placa Vrbničkog statute). 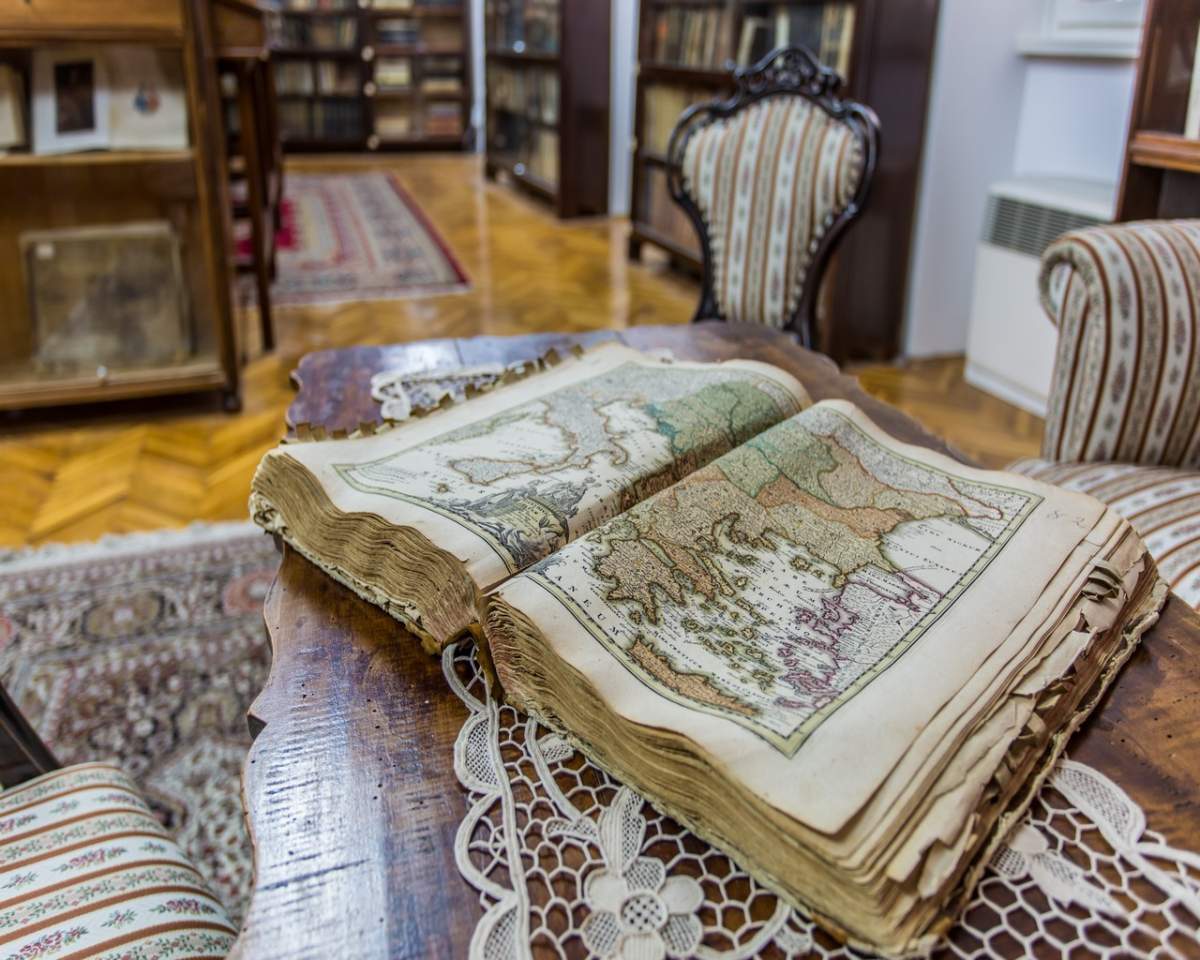 A rare and valuable exhibit is the famous "Atlas scolasticus et itinerarius" by Johann David Koehler, printed in 1718 in Nuernberg. In addition to this copy, there is only one another copy of Atlas, printed in 1735, and kept in Cambridge, England. This Atlas is especially interesting because, apart from the geographic locations of countries, it also contains images of old sailboats, weapons, medals and constellations.

Should you be given the opportunity to visit Vrbnik, pay a visit to the former Rector's Palace and inspect the Vitezić Family Library, an interesting ethnological collection and a reconstructed wooden Renaissance printing house. 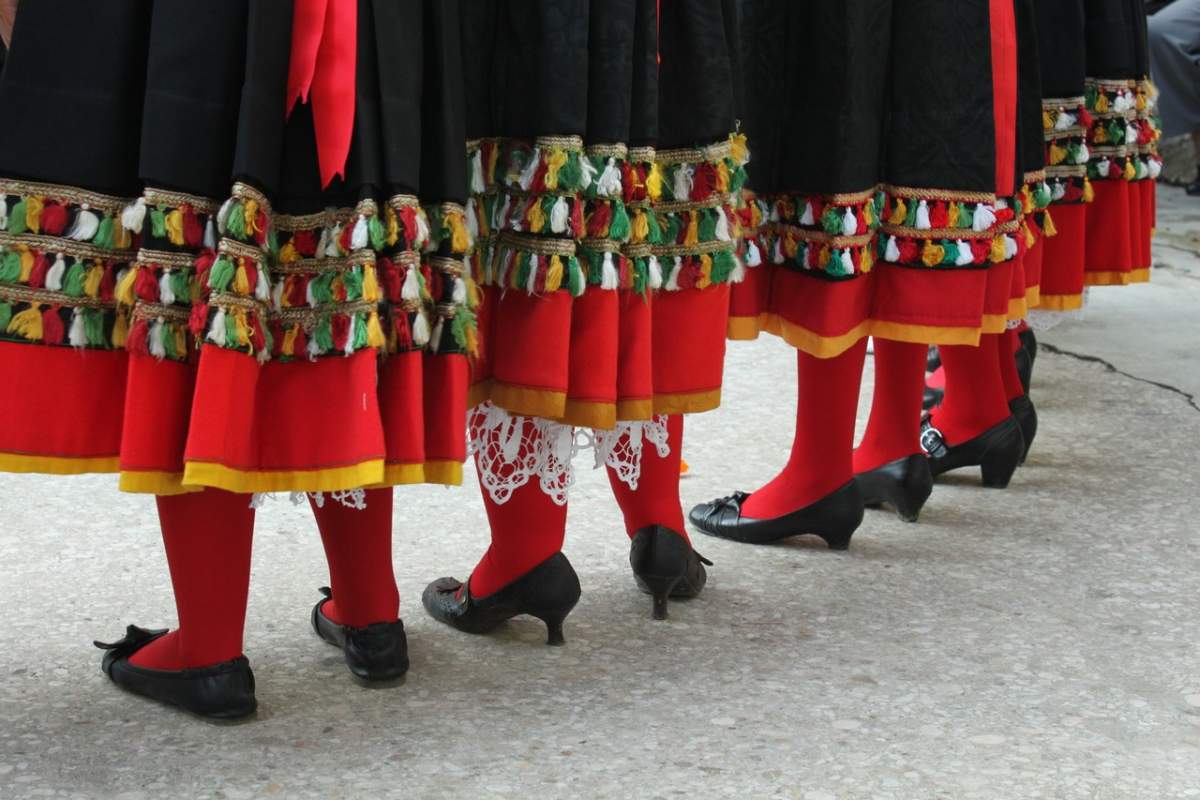 Vrbnik - the town of priests

It is also an interesting fact that the small town of Vrbnik has been throughout history the birthplace of three bishops of Krk and the present cardinal Josip Bozanić. The list of priests, theologians, monks and missionaries is a long one, so Vrbnik has often been called the town of priests. 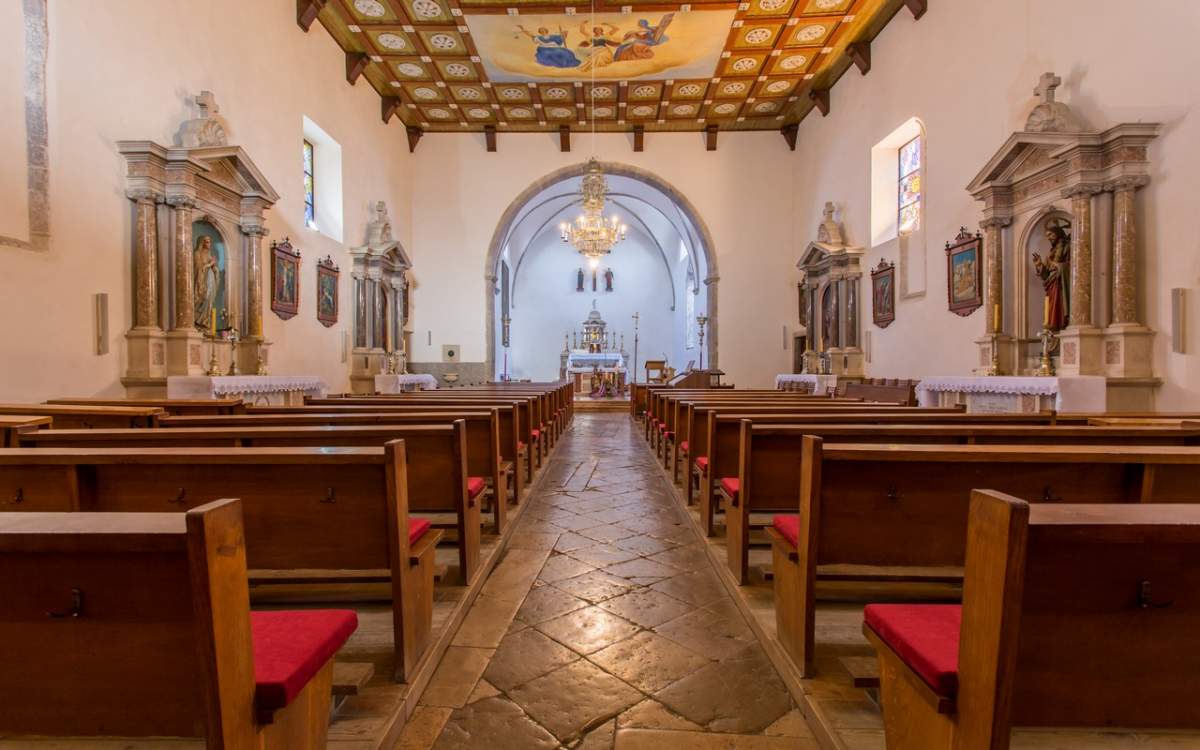 Vrbnik as a source of inspiration

Vrbnik has always been a place ideal for artists. Its beauty that inspires can be seen in hidden corners and unexpected places and many find inspiration for their artistic achievements here.

History, architecture and cultural heritage enthusiasts will be delighted by the historic town center that houses magnificent monuments, churches and chapels of marvelous architecture. There is also a rich Glagolitic heritage as well as folk costumes, traditional dances and the recognizable sound of “sopele” (ancient traditional woodwind instrument). 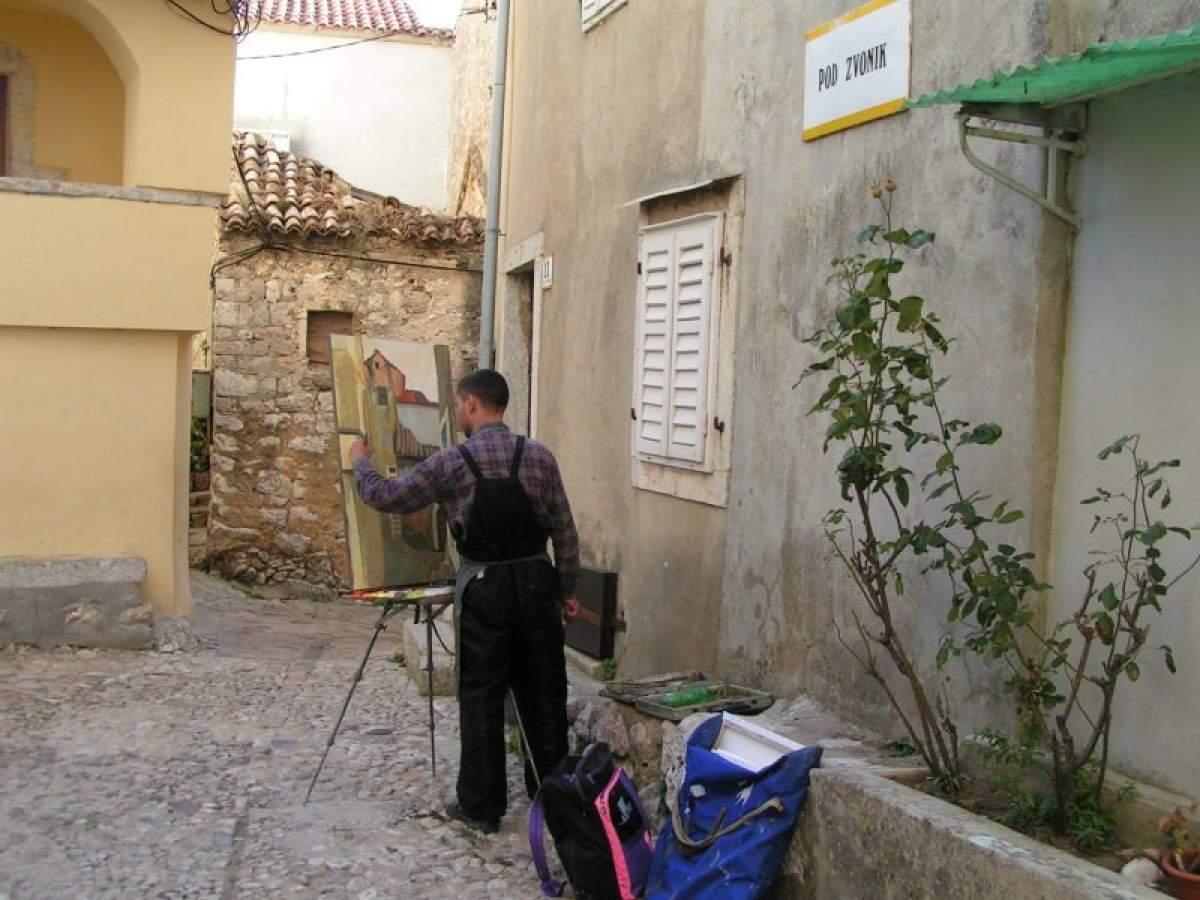 Vrbnik is the perfect choice if you travel with people who do not share your love of history, sightseeing and cultural heritage.

We assure you that not only you, but also such travelers will be enchanted and inspired by the old historical center, by passing through the narrowest alleyway in the world, by getting to know Glagolitic manuscripts, by visiting a number of beautiful monuments and by the architecture of the town.

What to see and visit in Vrbnik? 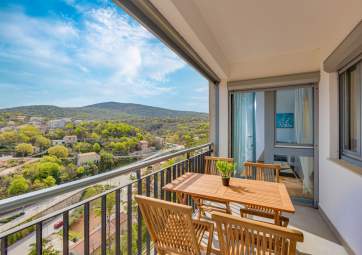 Luka 1 - peaceful location near the center