Krk - a city of history and culture

The town of Krk is called the town of history and culture for a reason. The city of Krk has been an urban center for more than 3000 years and is also the cultural and administrative center of the island of Krk. Krk will delight you with a series of fanciful cultural monuments - witnesses of its exceptional and long history. Very interesting events take place in Krk. The town of Krk is a very pleasant place to live and to spend your vacation in.

The city of Krk - a popular travel destination

Tourism began developing in the early 20th century, and a considerable impetus towards further the development of tourism and the island came from the construction of the Krk Bridge in 1980. The town of Krk and the whole island are a favorite tourist destination not only because of the abundance of natural beauty, rich cultural heritage and favorable climate but also because of its traffic connections and accessibility.

Today, the town of Krk with its surroundings has about 5,600 inhabitants. That number is doubled in the summer. Krk has spread beyond the remarkably preserved town walls, and most of the private accommodation, apartments, rooms and holiday homes, are located in private homes in newer neighborhoods outside the Old Town.

The well-kept swimming areas, sandy, rocky and paved beaches as well as the partly sandy seabed and exceptionally clear water attract many visitors. The town of Krk alone has 6 Blue Flags, recognizing the clean sea and the accompanying sanitary, catering and sport facilities on the beaches.

I love autumn in Krk is another reason to visit Krk in late summer and early autumn, considered by many as one of the most pleasant times for a vacation. Mid-September a cycling tour Bodul Bike takes place and at the end of September you can take part in attractive guided hiking tours through the island's extraordinary landscapes.

During the summer the town of Krk hosts numerous concerts, performances, events and festivals, while a characteristic event in wintertime is the Krk Carnival. Here we have selected several events that have become renowned and very popular among our guests.

Splendissima Civitas Curictarum - The Glorious Town of the People of Krk

According to belief, the founders of the town of Krk were members of an Illyrian-Liburnian tribe, the Curicta, and the town was thus named after them. The town was an urban center 3,000 years ago and proudly bore the title Splendissima Civitas Curictarum - The Glorious Town of the People of Krk, as can be read on the stone inscription from the beginning of the 4th century. During the expansion of the Roman Empire, the town of Krk became a Municipum. It is assumed that Krk had no less than 2 thermae and their floor mosaics are in part still visible today.

Parts of the town’s walls in the northern part of the town, next to the Franciscan monastery have been preserved from the Roman period, while the walls one can see today date mainly from the Middle Ages. The Counts of Krk, the House of Frankopan, also left significant traces in the history of the town and the island of Krk. A vast number of landmarks stems from the time when Krk was under direct Venetian rule (1480-1797), and the town of Krk, along with the entire island and the Republic of Croatia, shares a very interesting and tumultuous history.

The Volsonis bar shelters early Roman city walls, archaeological excavations from the Roman Forum and an altar from the 1st century BC from the Temple of Venus. The remains of the alleged Temple of Venus have been discovered in the nearby Mahnic Street. The distinctive layout of the two main streets, Cardo and Decumanus, ending in four city gates, of which only the small south gate has been preserved, also dates from the Roman period.

Among cultural monuments worth mentioning is the Frankopan Castle, which was built by the Frankopans from the 12th to 15th centuries. Nowadays its unique ambiance hosts numerous cultural events and is a must-see landmark for anybody visiting Krk. The Frankopan Castle is located on Kamplin Square, where the Romans built a training area next to their thermal baths, the foundations of which were used to build the early Christian basilica and the current Cathedral.

Among the fortifications, the old town hall from the 15th century with a unique sundial stands out, as well as the hexagonal tower on the shore with a Roman stele, which was built by Count Nikola Frankopan in 1407.

The town of Krk had very early on, in the 5th century, become the center of the Krk Diocese. Also in the 5th century, the oratorium of the early Christian community was transformed into a basilica. Parts of the basilica, like various ornaments and unique capitals with motifs of the Eucharist (birds feeding on fish) can still be seen in Krk Cathedral. The Cathedral arose from the thorough remodeling and expansion of the basilica in the 12th century and was upgraded during later centuries.

The dual Church of St Quirinus and St Margaret from the 12th century creates a complex with the Cathedral. The church is unique because it spans 2 floors and has an unusual south-north orientation. This unique religious complex, which is also the most famous cultural monument of Krk, is completed by the bell tower from the 16th century, which was restored to its final form in the 18th century. On the top of the bell tower is a statue of the Archangel Michael, showing the direction of the wind. 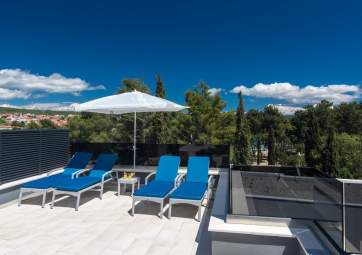 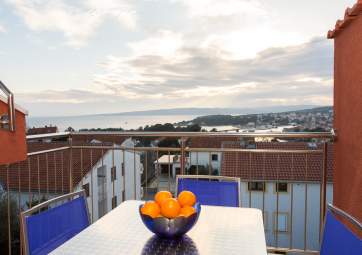 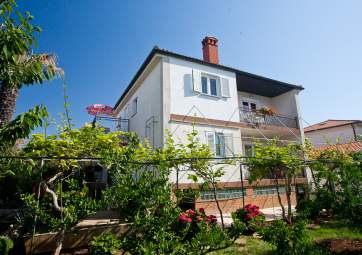 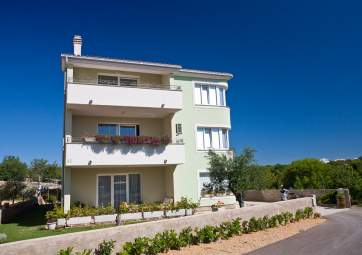