Together with 20 smaller villages, Malinska forms an area of the island called Dubašnica (“dub” is the local name for oak).

The wooded bay on the west coast of the island of Krk, where Malinska and the surrounding villages are located, boasts lush vegetation because it is sheltered from the cold winds and characterized by a mild climate. That`s why the potential for developing health tourism in this area was recognized very early on. 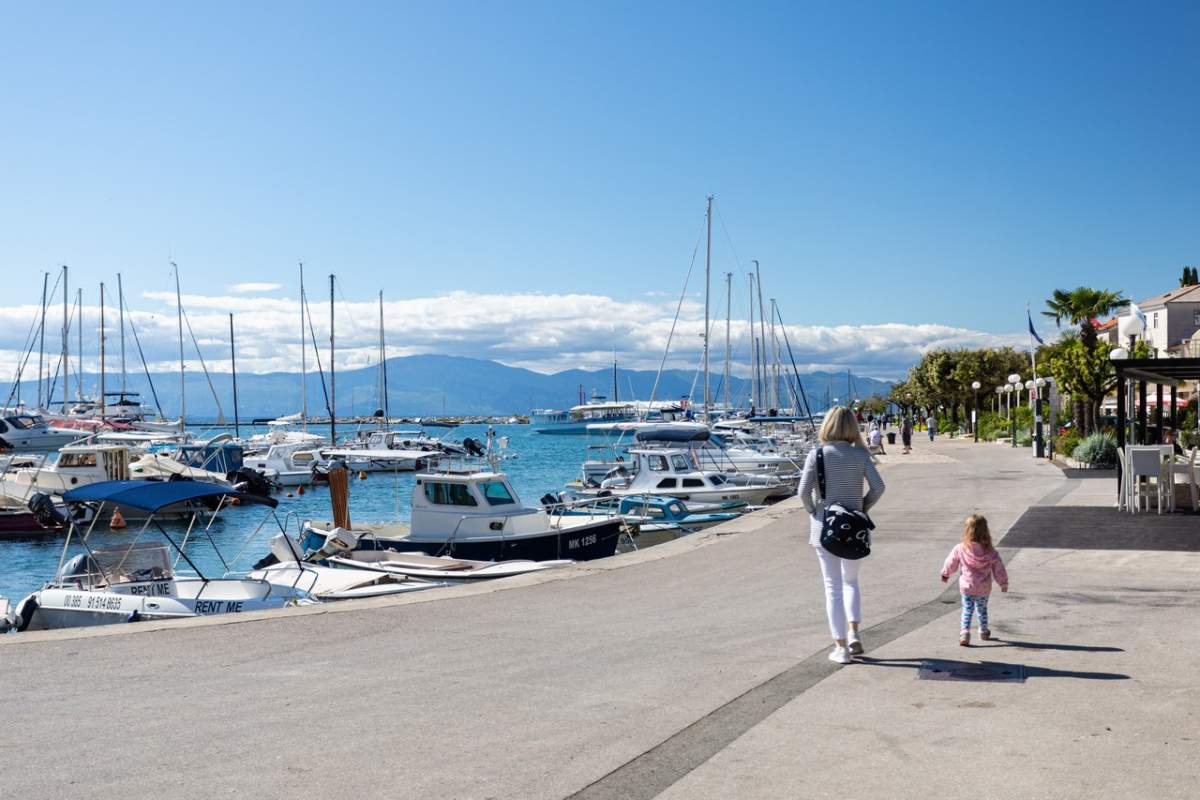 What to expect on vacation in Malinska?

Malinska is known for numerous beautiful beaches, long seaside promenades, many interesting events, activities for children and lots of possibilities for enjoying your active vacation on the Island of Krk.

Whether you are traveling with your family, friends or your significant other, Malinska is the ideal place for you. 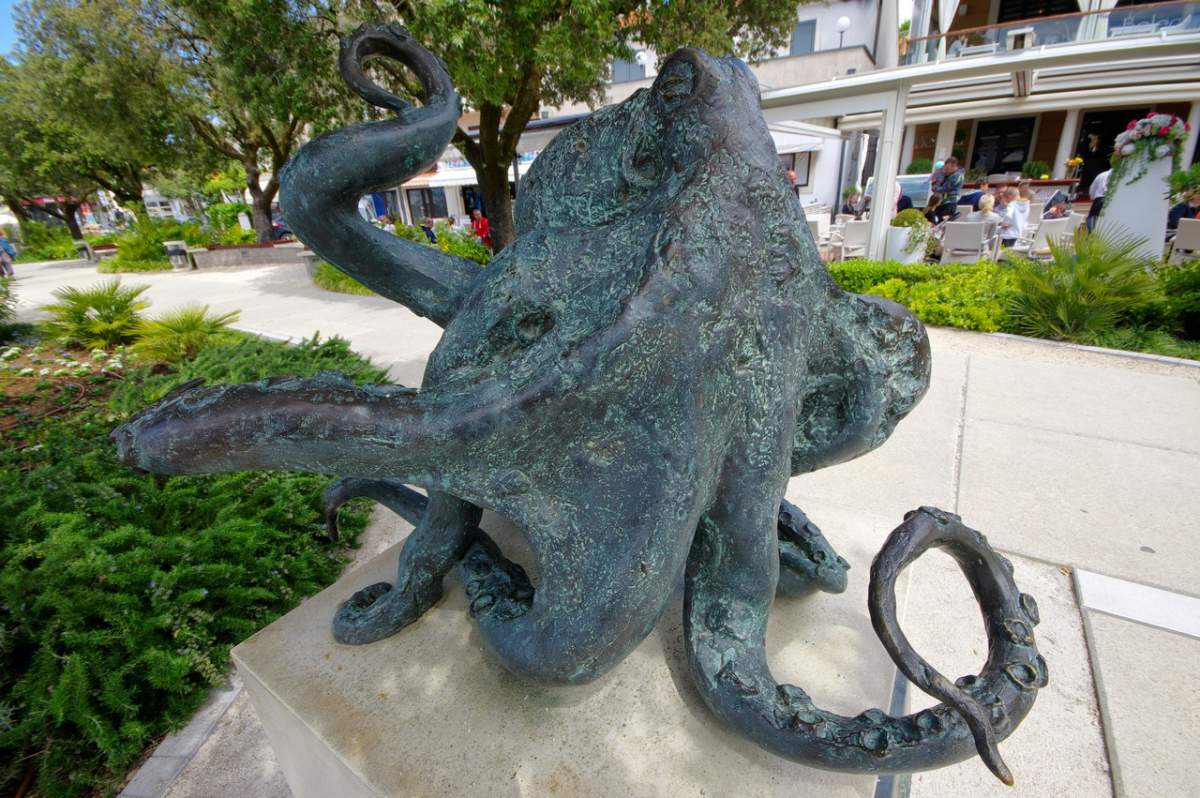 Today, Malinska is a favorite resort for numerous guests who can spend time on about a dozen nice beaches and like the mild climate and a rich tourist offer.

As far as the beaches are concerned, Malinska and its nearby surroundings are abundant with beautiful pebble beaches, rocks and concrete plateaus suitable for hours-long sunbathing. In addition, most of the beaches in Malinska offer numerous amenities, from renting deck chairs and parasols to water sports. 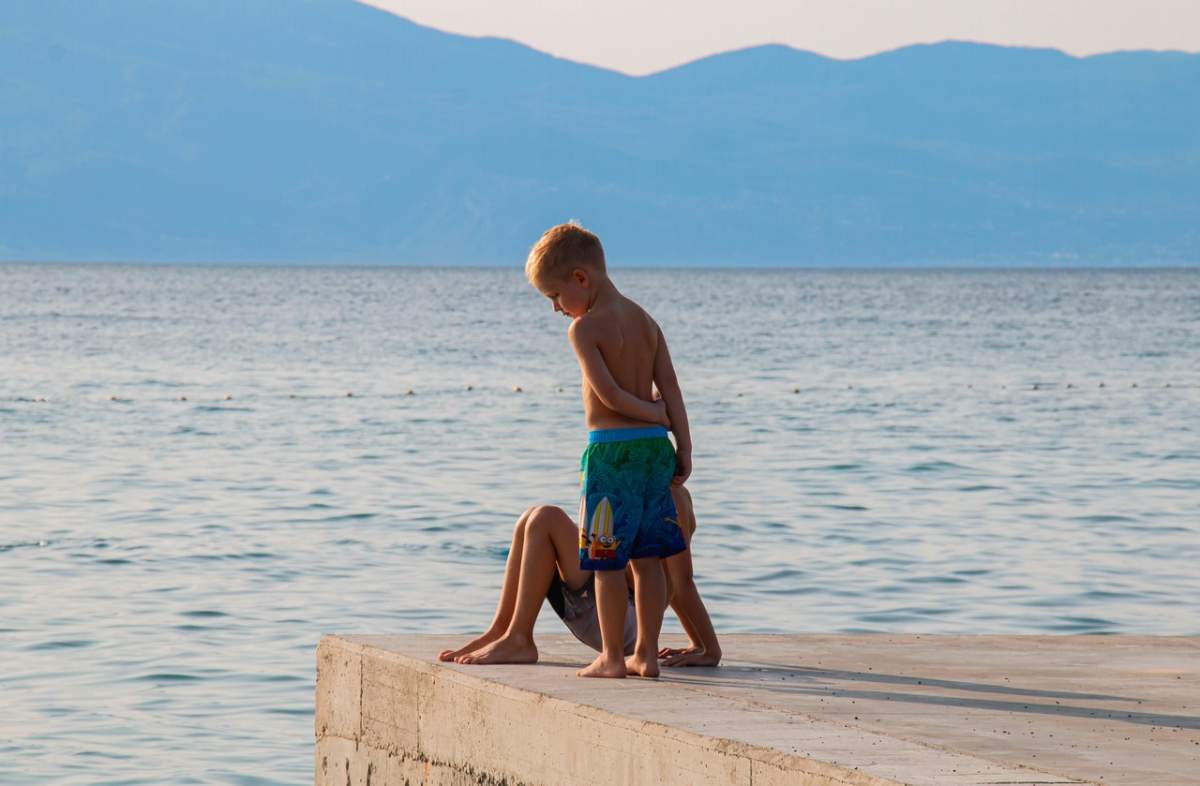 Among other things, there is an amusement park for children, a panoramic train, marked pedestrian and cycling trails and a rich gourmet offer. Various sports, cultural and entertainment events and festivals are organized in Malinska, from early spring to late autumn.

We invite you to visit Malinska and see why it has been one of the most popular tourist destinations on the island and beyond for years!

There are numerous beautiful pebble beaches, rocks and stone plateaus in Malinska and its surroundings, which are ideal for a long lazing in the sun. In addition, most of the beaches in Malinska offer numerous amenities, from renting deck chairs and parasols to water sports. Here we have singled out the most popular beaches in and around Malinska for you.

Malinska will delight you with its numerous and varied beaches. In the center of Malinska, there are beaches Maestral and Rupa with lots of facilities for children.

Near the beach Rupa, you will find a small sandy beach Portić.

Malin Draga bay is located near the center of Malinska, below the hotel Malin. Most of the beach is made of pebble parts and stone plateaus. Malin Draga is perfect for families with small children because of the abundance of various amenities, including a water park with a children's slide, a beach volleyball court, and a range of restaurants and other catering establishments in the immediate vicinity.

Beaches in Porat and Vantačići

If you go from Malinska to Porat, 4 km away, you can enjoy some beautiful beaches. Here you will find the Vrtača beach with concrete sunbathing plateaus, a small pebble beach and a ramp for the disabled.

On Rova beach, you can refresh yourself in the shade of nurtured olive groves. Rova beach is known for its crystal clear sea and is considered one of the most beautiful beaches in Malinska. This beautiful pebble beach is located in Rova Bay, near the Blue Waves resort. Deck chairs and parasols can be rented on the beach, and refreshing drinks are served in a hotel bar.

In nearby Vantačići, there is a nice beach in the harbor and Valica beach with cascading sunbathing areas.

A tourist train runs to Uhlić beach in Porat, and there are walkways leading to many small, romantic hidden coves. 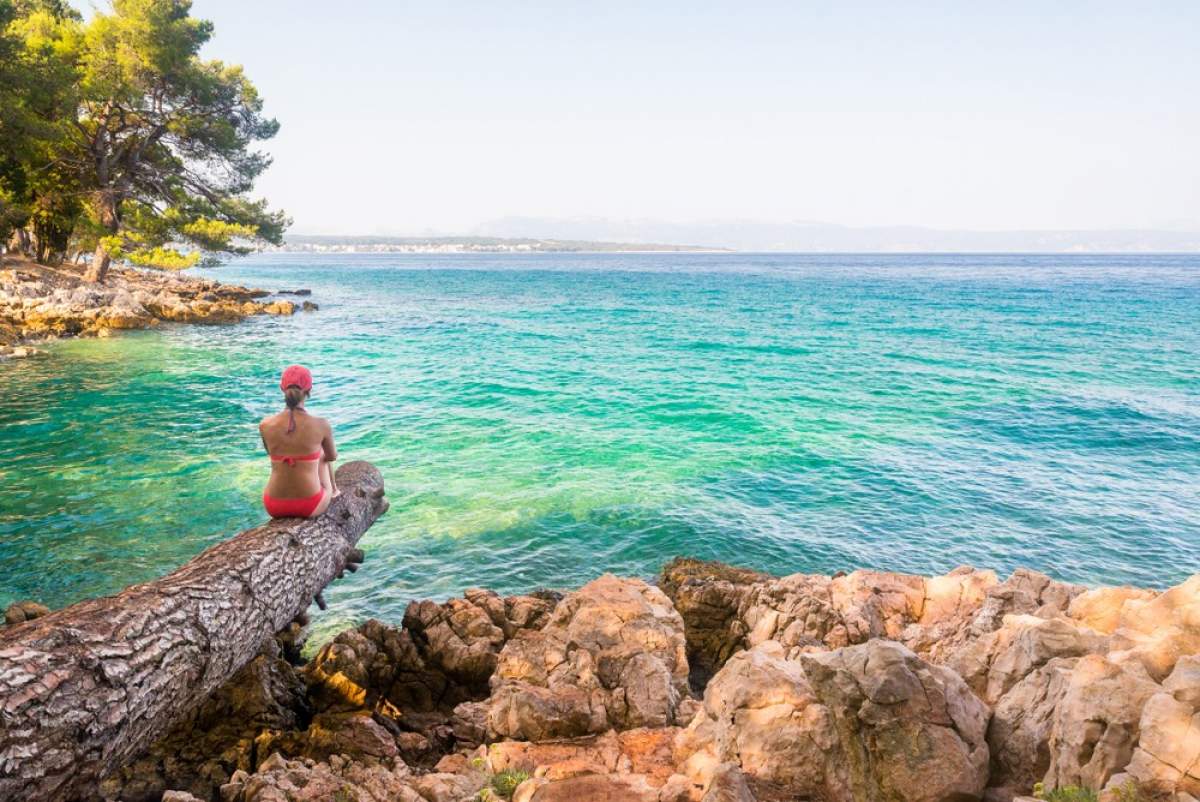 Along the 6 km long Paradise road from Malinska to Njivice, you will find the Ribarsko selo beach, which has a section for guests who come on vacation with pets. Another beach for all those who travel with their dogs is located in Porto, about a hundred meters from Uhlić beach in the direction of Cape Pelova.

Haludovo beach is located along Paradise road, which will delight you with the pine forests surrounding it and in whose shade you can enjoy. 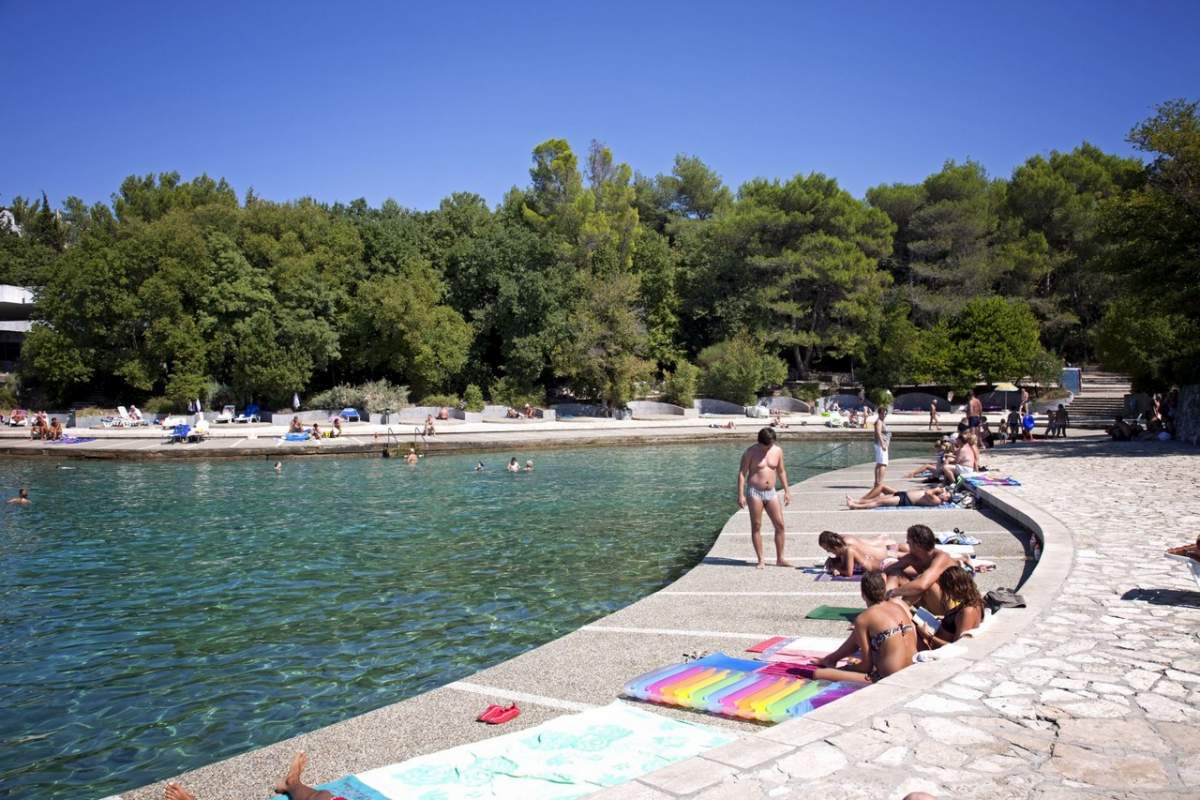 In addition, we highlight the wild beach Rajska plaža, which consists of hidden rocks and pebble parts and is unofficially used as a nudist beach.

A tourist train runs to Uhlić beach in Porat, and from there, promenades lead to many small, romantic hidden coves.

Concerts of contemporary and traditional Croatian music; moto meetings; gourmet events; sports, cultural and other interesting happenings are what await you if you visit Malinska.

Some of them are, by name, the Day of St. Apollinaris (Dan sv. Apolinara) which is at the same time the day of the municipality of Malinska - Dubašnica.

Day of St. Apollinarisis celebrated every year on July 20th when numerous full-day culture and entertainment events are accompanied by fireworks. 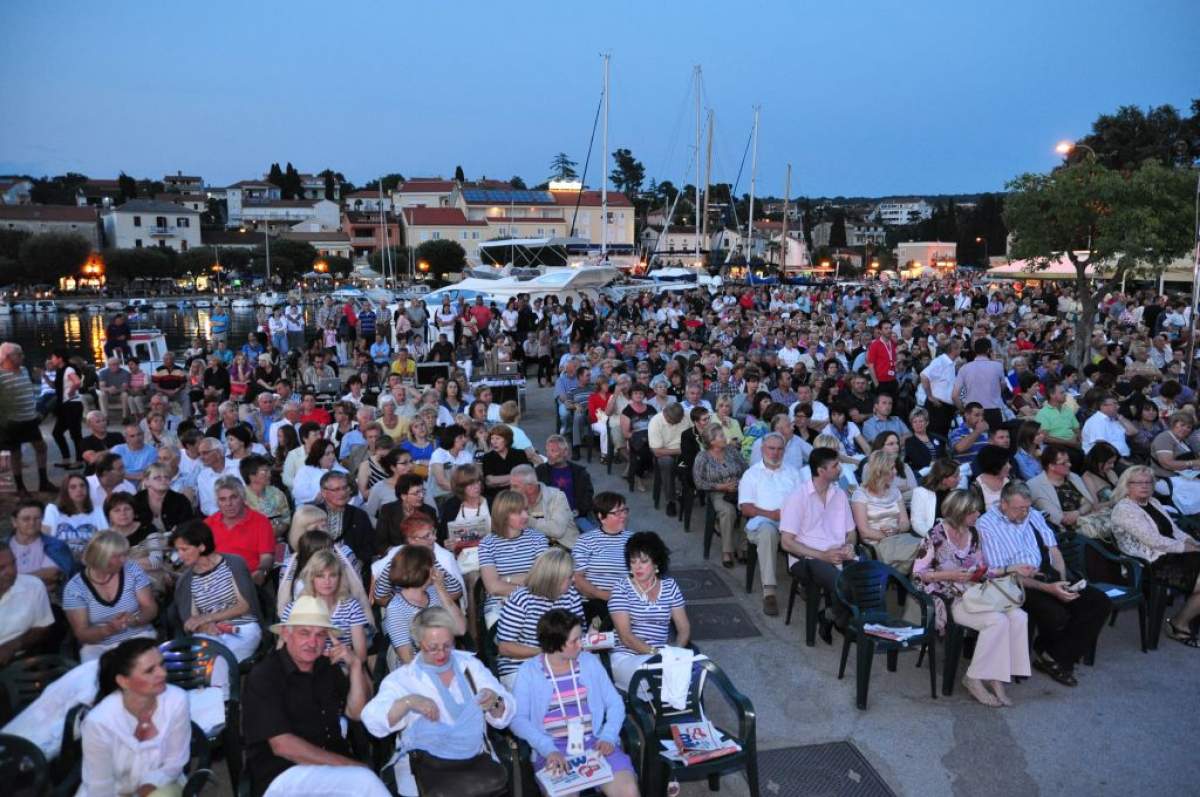 Every year, on the last weekend in July, Malinska Nights (Malinskarske noći) take place. This is an event, which offers numerous interesting performances and entertainment programs.

In addition to the Day of St. Apollinaris and Malinska Nights, numerous beach bars and hotels organize daily entertainment programs.

During the spring and summer months a number of sports events are organized (a table tennis tournament, a chess tournament, bicycling events, karate, fishing, etc.).

Moreover, Malinska has an exceptional gourmet offer, a series of concerts of popular and classical music, organizes exhibitions and performances, traditional dance events, an electronic music festival and numerous other interesting happenings and events.

Since Malinska is a favorite family destination, you will find plenty of content for children, such as an amusement park, trampoline, and 8D cinema box.

The Olive Touch weekend program is also organized where, in addition to picking olives in century-old olive groves, you can enjoy Krk specialties made from olives and olive oil. There is also a wellness program that uses olive-based products.

If you like active holidays and outdoor activities, we suggest you participate in the Malinska Trail. Here you can enjoy a less demanding 14 km race and a more demanding 24 km race.

The Malinska Trail race takes you through the beautiful nature of Malinska and Dubašnica. It is an opportunity to discover the numerous hiking trails that dot the surroundings of Malinska. 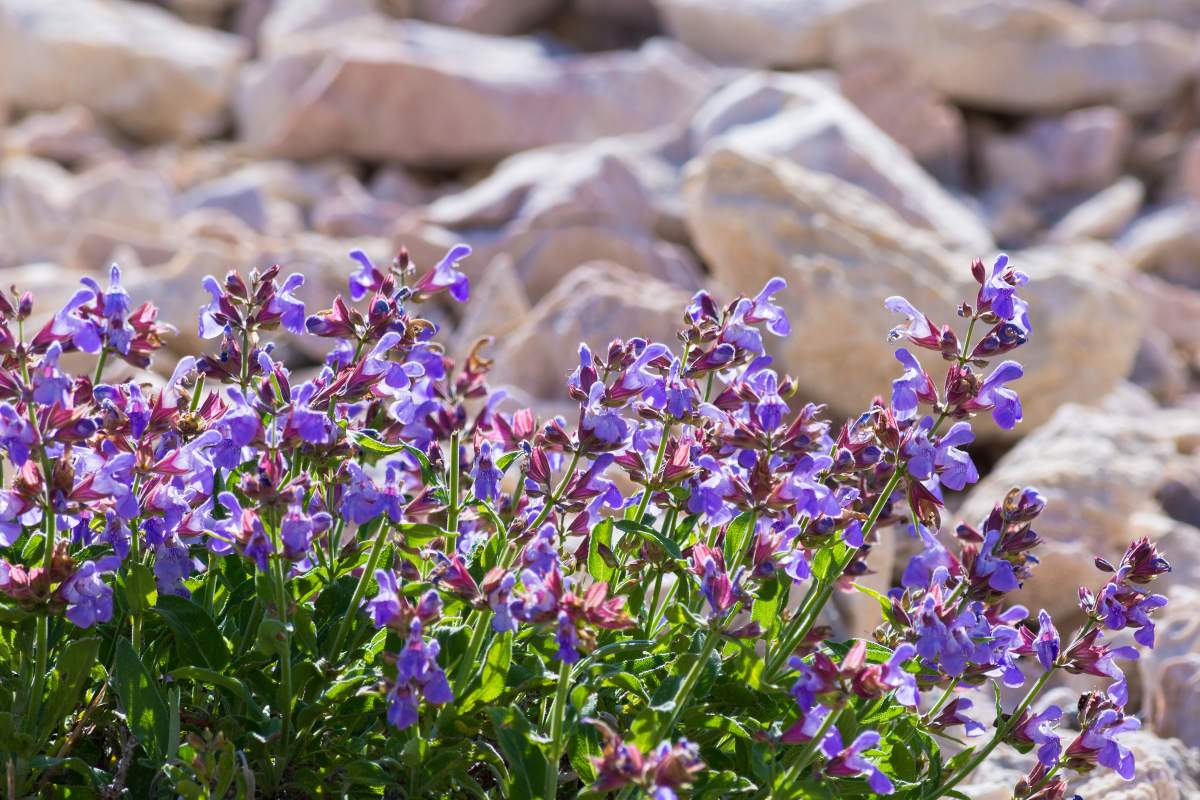 The historical and cultural heritage of Malinska

Together with some twenty smaller villages, Malinska also belongs to the part of the island named Dubašnica, the name originating from the expression for the oak (dub = oak). 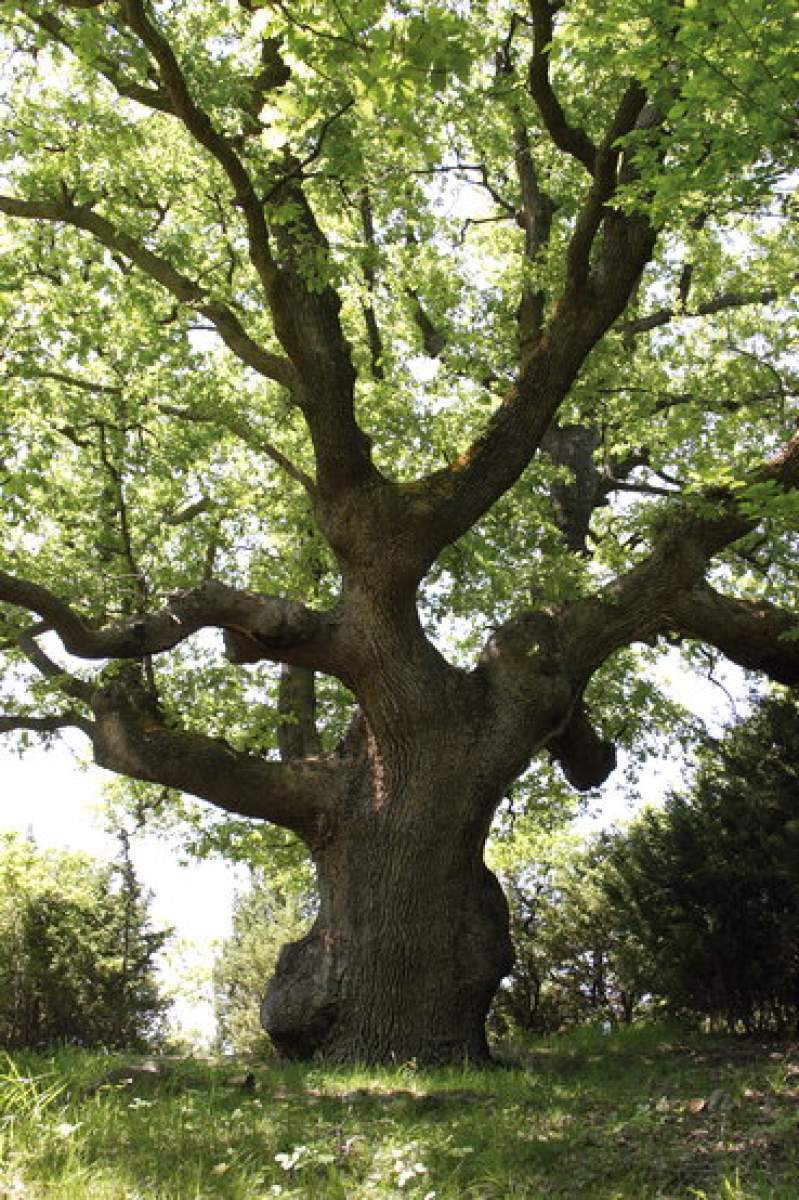 The forested bay, where Malinska is situated, is abundant with lush vegetation, resulting from a mild climate with about 260 sunny days a year.

Dubašnica is situated on the western side of the island of Krk, and it is interesting that this is the only part of the island, for which can be said with certainty when it was inhabited.

Until the 15th century, Malinska and the entire territory between it and Krk were not been inhabited and had no citadel center. This territory partly belonged to Krk and partly to Omišalj.

In the 15th century, Malinska was mentioned as a good anchorage where boats used to take shelter from strong wind. 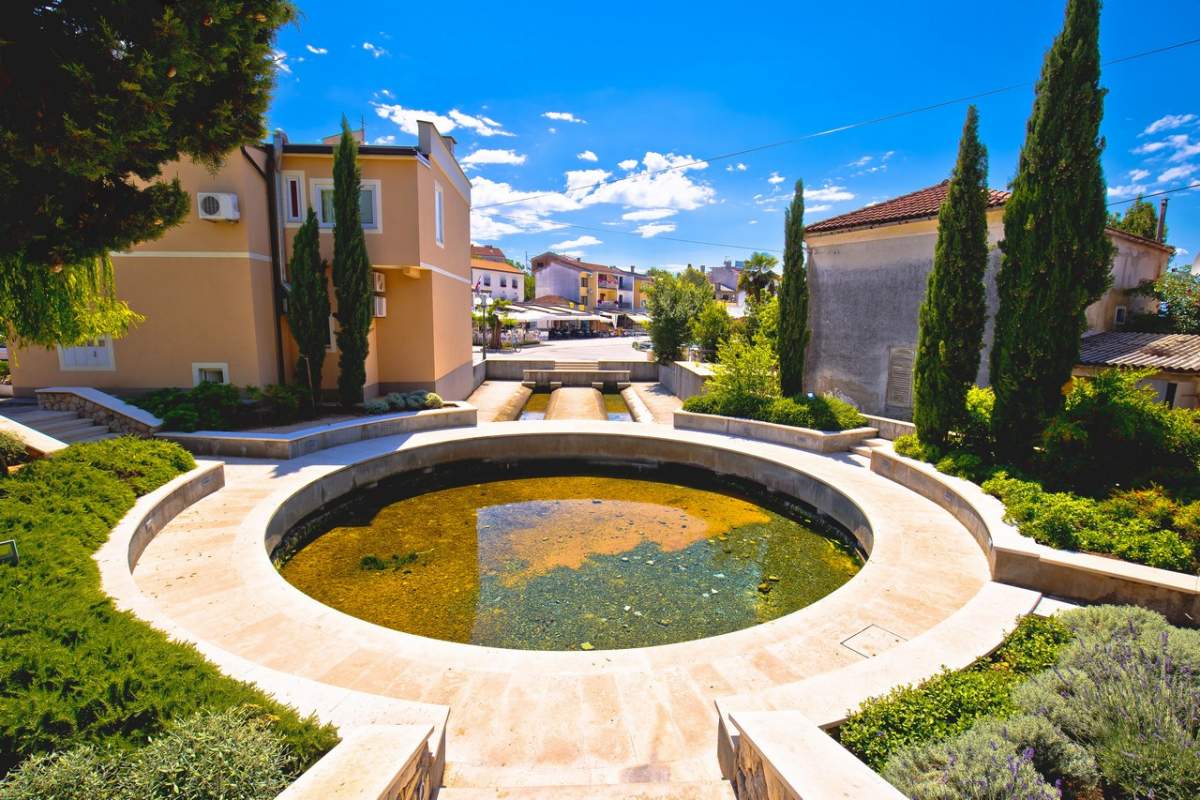 Malinska was named after a mill, the remains of which are still visible in the town center next to a water source.

In 1937, the freshwater spring Jaz was converted into a place where the laundry was washed. Nowadays Jaz is a favorite gathering place.

Precisely because of the source of freshwater near the sea, you will find cute ducklings in the port of Malinska.

Malinska underwent significant expansion in the 18th century when a port was built mainly for exporting wood.

The first houses were then built around the port, forming the nowadays very popular and lively tourist promenade.

Malinska - the pearl of the Kvarner Islands 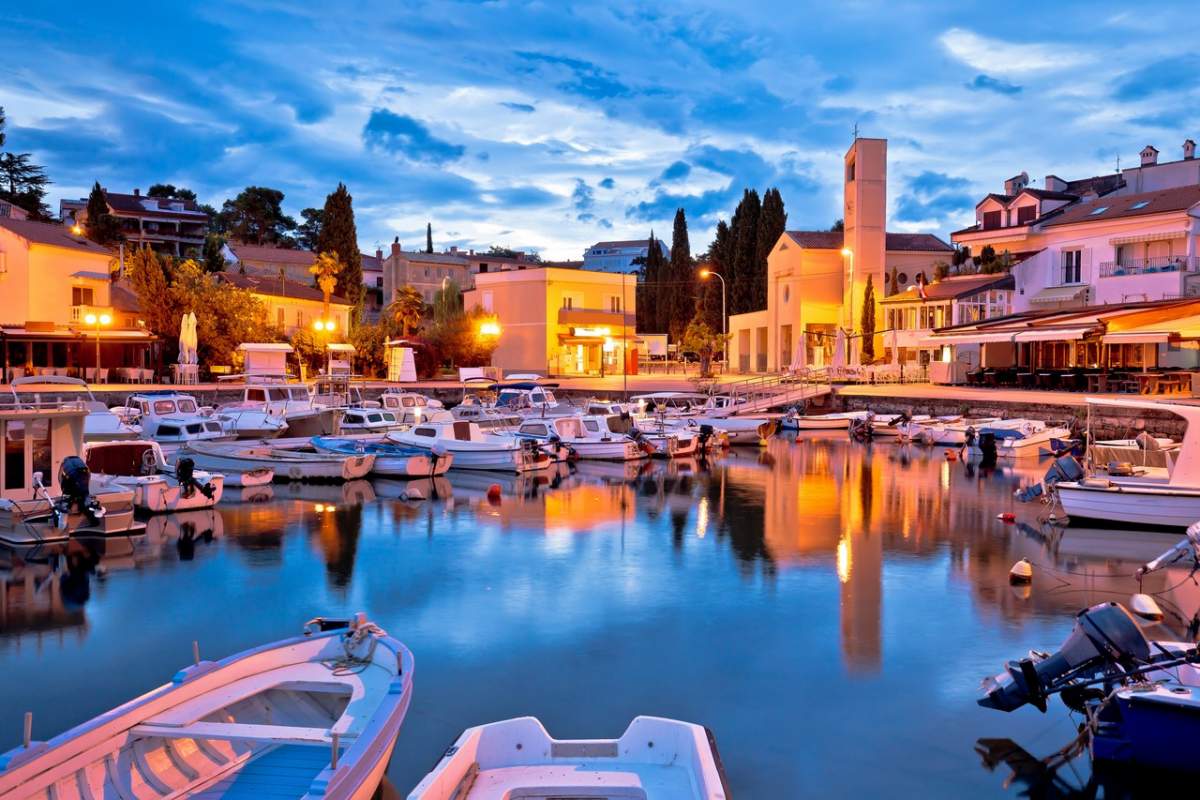 After introducing a steamer in 1866, Malinska, which was until then the port of wood export, turns into a famous climate spa where spa tourism flourishes.

The first visitors, mostly tourists from Opatija arrived aboard steamships in the 19th century. Another event that contributed to Malinska’s popularity was the arrival of the Crown Prince of Austria, Rudolf of Habsburg to enjoy the hunting grounds around Malinska. 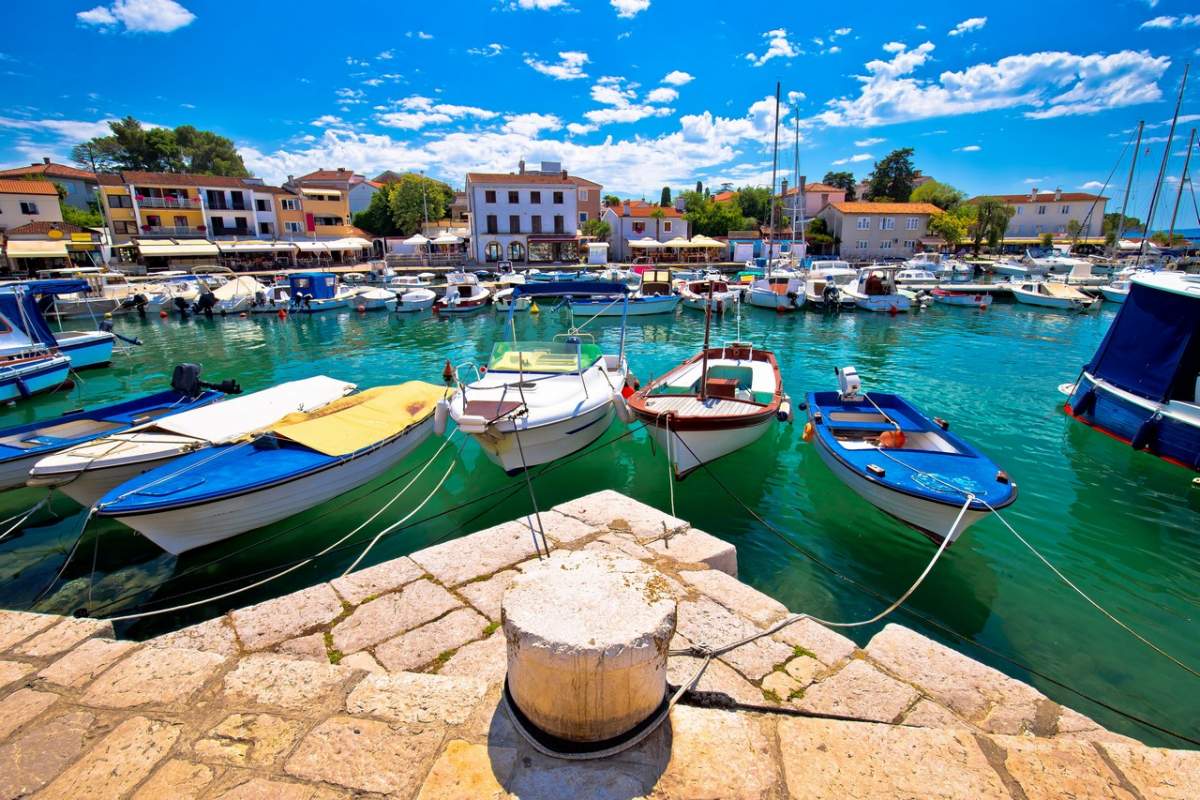 The press in Vienna afterward referred to Malinska as the pearl of the Kvarner Islands.

Sights in Malinska and its surroundings

What is the cultural and historical heritage worth visiting in Malinska: 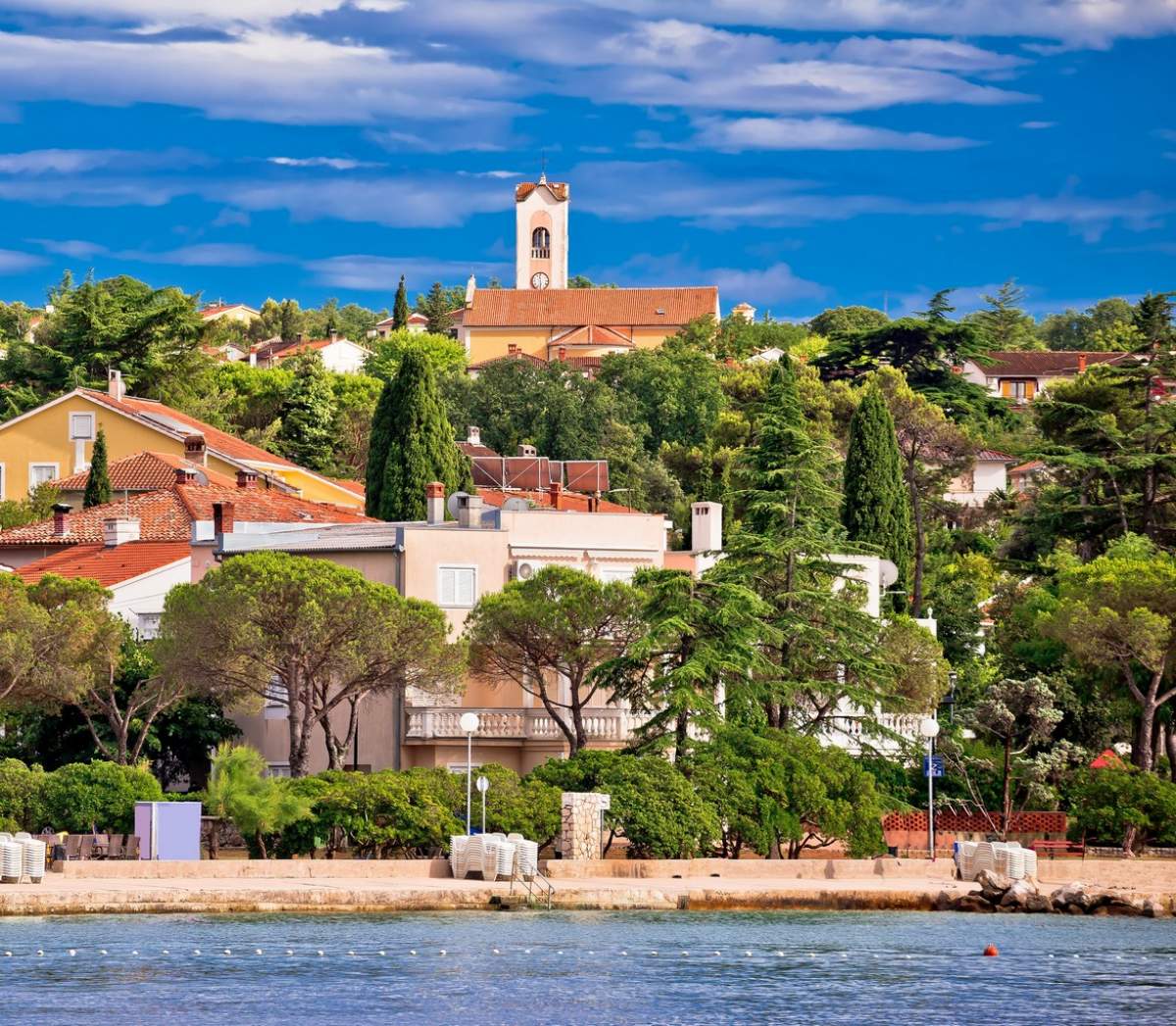 The new church of St. Nicholas from 1999. is situated in the center of Malinska by the sea. In the nearby Bogovići is the church of St. Apollinare with a distinctive bell tower.

Church of St. Apollinare has a very interesting and long history - it is mentioned as early as 1500 when it was located in the Dubašnica`s field. That central settlement of Dubašnica was devastated by malaria and its inhabitants moved to nearby Bogovići. In the 19th century, the old church was moved stone by stone and rebuilt in Bogovići.

The glagolitic monastery in Porat - an oasis of spirituality

To the south of Malinska lies Porat, also a popular tourist destination. One can visit its popular Franciscan monastery – a Glagolitic monastery dating from 1480, with the Church of St Mary Magdalene Within the monastery, there is a museum with sacral collection and valuable exhibits, testimonies of folk life and customs of this region. 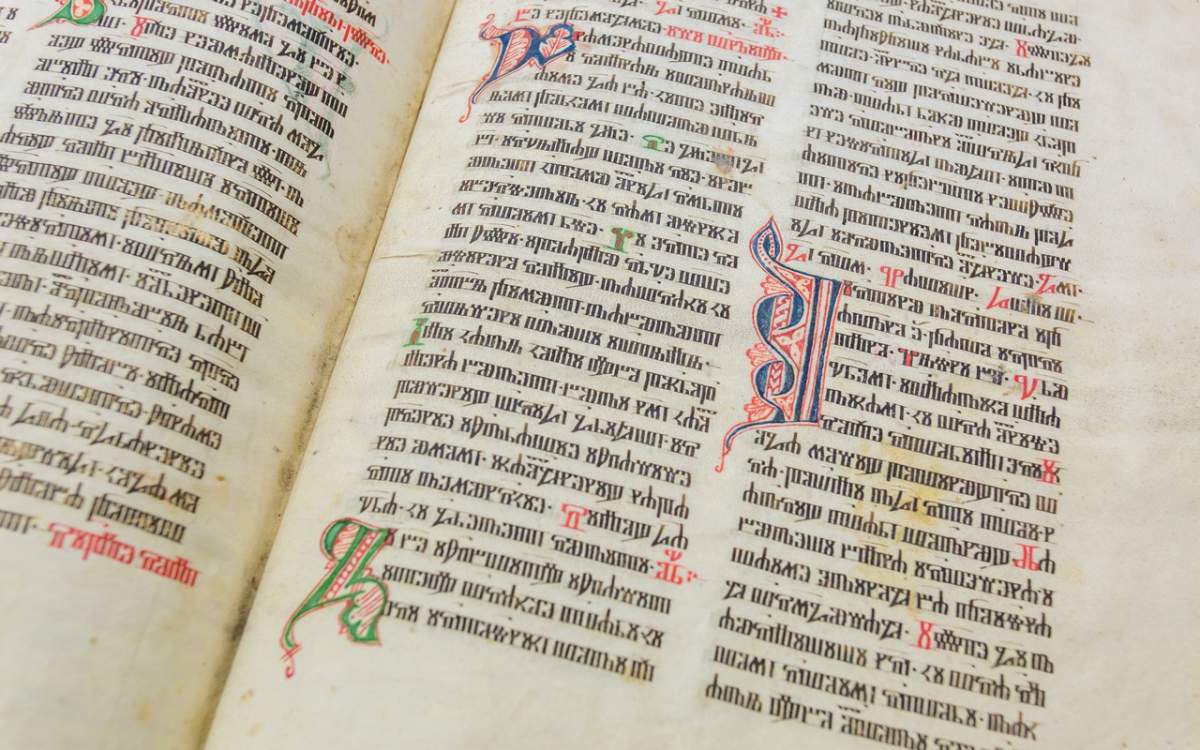 The Franciscan monastery of the Third Order in Porat preserves valuable Glagolitic manuscripts. In the courtyard of the monastery there is an interesting lapidarium with casts of the most important Glagolitic inscriptions in stone.

There is an early Christian church complex, close to Sveti Vid Miholjica in the Malinska-Dubašnica municipality, in the forest Cickina.

It covers an area of about 5,000 square meters, and, according to experts, dates from the period between the 5th and the 7th century. Within this complex, there is a church, the remains of several structures and the Baptist well.

Explore the archeological site of Cickini, walk to the Franciscan monastery in Porat, walk along the beautiful promenade by the sea from Porat to Glavotok.

You can also visit Fumak - the largest wooden crucifix in Europe. This votive cross is located in a beautiful location along the stone Way of the Cross. 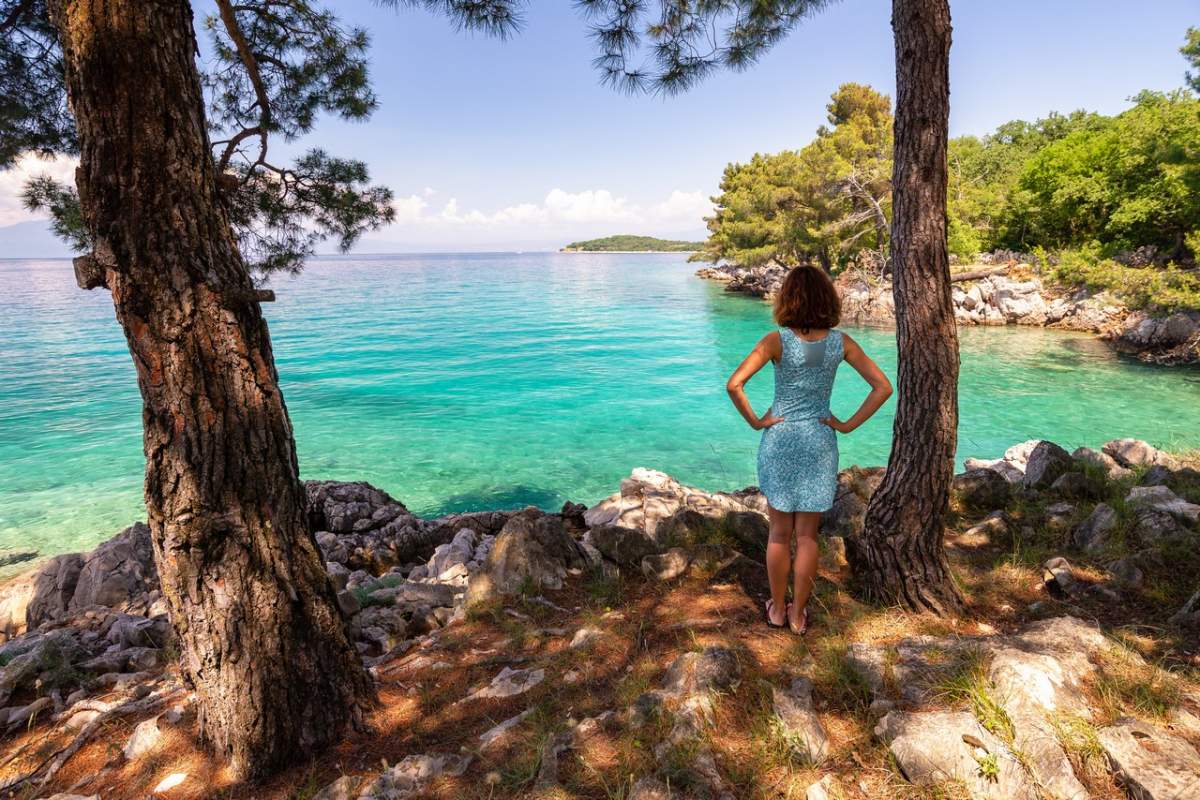 The most famous promenade is Paradise Road, which leads from Malinska to Njivice and bears its name for a reason.

There is also an educational promenade "Step into the history of our hardworking ancestors".

This educational promenade near Porto will show you with the help of several interpretation boards how the island's inhabitants once lived in harmony with nature.

Enjoy the salty air and the lush oak and pine forests of Dubašnica. 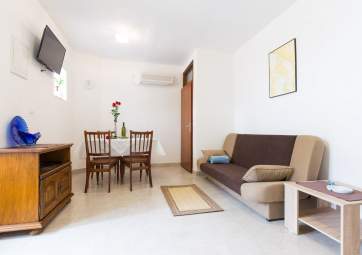 Miki - holiday house in a quiet location near Malinska 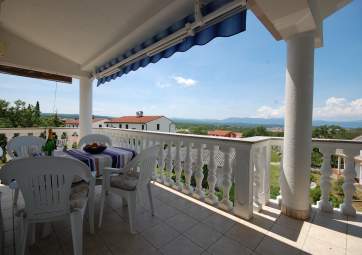 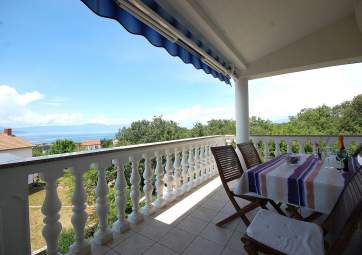 Nicky B - with a great view of the sea and Malinska 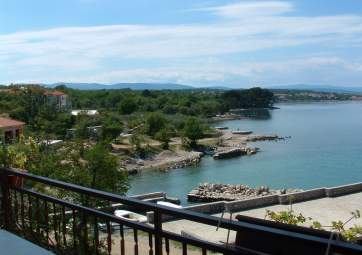 Beach b - three-bedroom apartment right by the sea